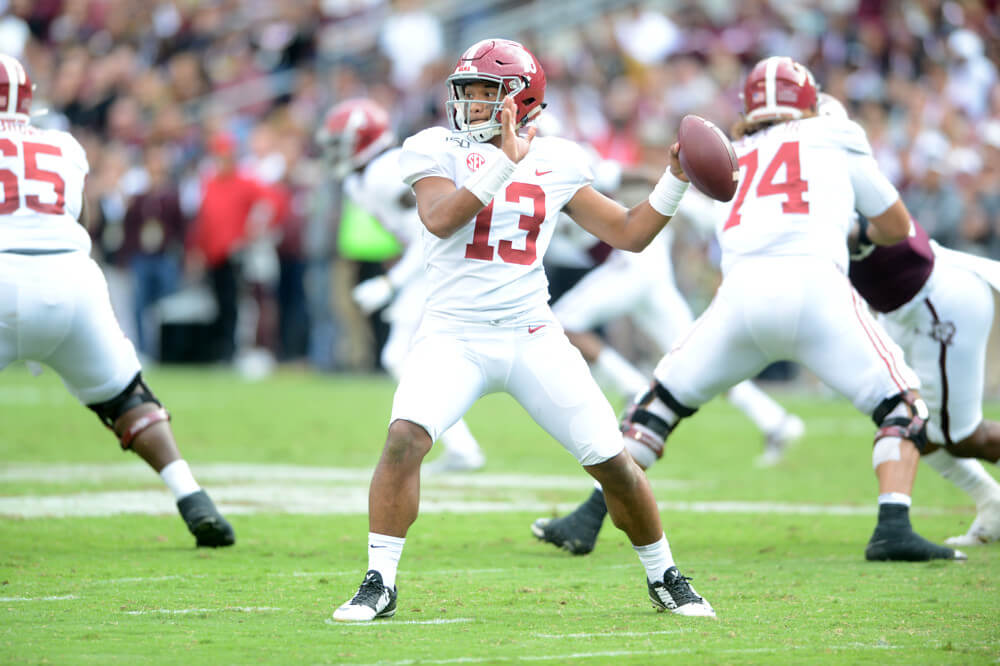 Coming off a 2-0 performance with wins on the Wolverines and Ducks, I’m looking to score big on a pair of NCAAF Week 11 games this Saturday afternoon.

This week 11 game has been on every NCAAF bettor’s calendar with a big checkmark since Week 1.  And the day has finally come, a showdown between the top two teams in the Nation when LSU heads to Tuscaloosa to face Alabama. Whoever comes out on top of this game will pretty much lock up the SEC West title and a berth in the College Football Playoff.

The College Football oddsmakers set the opening spread at Alabama -7 with a total of 63½.  Those openers have since been bet down to between 5½ – 6½ and 62½ respectively.

Alabama is on a 4-1-1 ATS streak against LSU and in that one non-cover game, the Crimson Tide got stuffed at the goal line as time ran out.  A lot of this success has to be attributed to Head Coach Nick Saban who has a mind-blowing 147-15 record since taking over for Joe Kines back in 2007. Bama under Saban averages just 1.25 losses per season, no other D-1 team comes close.

The biggest question mark heading into this game is the health and availability of Alabama QB Tua Tagovailoa.  The Heisman hopeful has been out since suffering an ankle injury against Tennessee and subsequently underwent a ‘tightrope’ surgery to speed up his healing process, his second such procedure in two years. This might be a real factor in his availability as all parties involved want what is best for Tagovailoa’s long-term health and we might see Mac Jones again this weekend.

There are really only three outcomes from now until Saturday.  He is either held out of the game entirely, play while injured or suit up with 100% use of his ankle.  More than likely, his status will fall in between the latter two options.

It’s worth noting that Tua has played against LSU with a bad wheel before.  Last season, nursing a knee injury, he cut up LSU in the air and on the ground en route to a 29-0 shutout win.

If Tua is unable to make a go of it, the Crimson Tide will turn to Jones to fill in another week under center.  Jones led the Tide to a very convincing 48-7 win over Arkansas last weekend, throwing for 235 yards and 3 touchdowns.  This brings the Tide to a perfect 8 for 8 winning games by double digits this season.  If Jones does in fact start, the Crimson Tide will lean a lot more on their run game and try to work the clock more as to not give Jones too much to do.  The system will be simplified but I expect effectiveness either way.

On the other side of the field, LSU is coming off a bye week with their last game being a massive 23-20 win over conference rival Auburn.  The Tigers have their own Heisman hopeful in Joe Burrow, who sliced up No. 9 Auburn in his last game out.  LSU comes into this game on a 13-3 ATS tear over their last 16 games on the road against teams with a winning record.  Burrow is the current consensus favorite to win the Heisman Trophy and touts the league’s highest completion percentage at 78.8%.  He ranks second in overall passing yards with 2,805 and touchdown passes with 30.  With the weapons he has available to him that should come as no real surprise.  With elite talent in Justin Jefferson and Ja’Marr Chase out wide and Cylde Edwards-Helaire handling the run game, LSU has a lot of confidence heading into this game.

Aside from possibly a starting QB, depending on who starts for Alabama, the Tigers’ only real advantage comes in their secondary.  They might be the best in the nation with Grant Delpit and JaCoby Stevens leading the way, combining for 92 tackles on the year.  Cornerback Derek Stingley Jr. has four picks on the season in support.

The defense is probably the Crimson Tide’s only weak spot if you can even call it that.  I suppose it’s more of a case of not up to their usual level in Tuscaloosa.  The Tide rank ninth in total scoring with 15.3 points allowed per game and 13th in passing yards allowed at 180.1 YPG. They have a strong 18 takeaways this season and hold a plus-13 TO margin in 2019.  Trevon Diggs has led the way with a trip of interceptions and a pair of fumble recovers with a pair of defensive touchdowns.

Under Nick Saban, Alabama is 40-29 ATS against ranked teams and 7-2 against the spread in their last nine games following a bye.  Even if Tua is unable to suit up, Nick Saban has enough weapons to beat any team that stands in his way of another National Championship. They have a better core of professional caliber receivers in Devonta Smith and Jerry Jeudy with Najee Harris rushing for 642 yards and nine TD’s so far.  Despite LSU’s defensive prowess, I just don’t think it will be enough to contain the Alabama offense in NCAAF week 11, Tua or not.

This feels like a game in which the sharps are going to be all over LSU and will come up on the wrong side of things.  I don’t see any way Tua doesn’t suit up for this game and put on a good show at home.  I’m going to side with the public here and look for Bama to Roll Tide straight to win and cover.

The Minnesota Golden Gophers take a well-timed trip home to host the equally undefeated Penn State Nittany Lions this Saturday afternoon. They find themselves as seven-point home underdogs and might not be quite the welcome party they are hoping for.  With each team looking to keep their eight-game win streak alive, each squad will be at their best this weekend.

Each NCAAF team is coming into this week 11 game well prepared after each having a bye last week.  This also begins a very tough stretch of games to finish the season for Minnesota who has Iowa and Northwestern to contend with over the next two weeks.

The Gophers have their best team in recent memory with Tanner Morgan and Rodney Smith leading an offense that ranks 14th in the nation in scoring with almost 39 PPG in 2019.  However, where they really shine is on defense.  A defense that has kept them atop the Big Ten West Division.

The crew led by Carter Caughlin and Sam Renner ranks 13th in total defense, giving up just 283 YPG and are 22nd in points allowed at 20 PPG.  They have given up just eight passing touchdowns on the year and are poised to put up a real fight against the fifth-ranked team in the country.

The Gophers ran roughshod over the Maryland Terrapins two weeks ago, taking an easy win with a final score of 52-10.

Despite their strong defensive talents, perfect record and first place standings, I just don’t think the Gophers have what it takes to really worry Penn State all that much.

Penn State is also coming into NCAAF week 11 off an easy win in their last game, taking the Michigan State Spartan out 28-7.  They scored 21 points in the first half and let their defense finish the job.  They collected a pair of interceptions and fumbles along the way and made MSU look like a team lost.  The Lion rank second only to Ohio State in scoring defense, surrendering just 9.6 PPG and a staggering four passing TD’s on the year, good for best in the nation.  It could be that edge that secures this PSU win.

The Lions have covered each of their three road games so far this season but we’re going to focus our attention on the total for this matchup.

This game features the two best teams at not giving up passing touchdowns and is also very strong with ground games as well.  The Forecast currently has a 60% chance of snow on Saturday and a 100% chance to be brick city cold no matter the precipitation.  This would make putting on an offensive clinic difficult for either team.

The total opened at 48 and can still be had for that price at a number of outlets.  The under is 25-4 since 2015 when a team allowing seven points or less takes on teams who have allowed 14 points or fewer in two straight games when the total is under 49.

I like this to be an exciting game for fans of defense and while I expect Penn State to coast to an easy win, I believe it is on the back of their defense in NCAAF week 11.

Week 10 NFL Props: The Over A Brees At Home
Daily Picks Nov 8: Cavs Can Against Wizards
Get Free Picks & Exclusive Offers