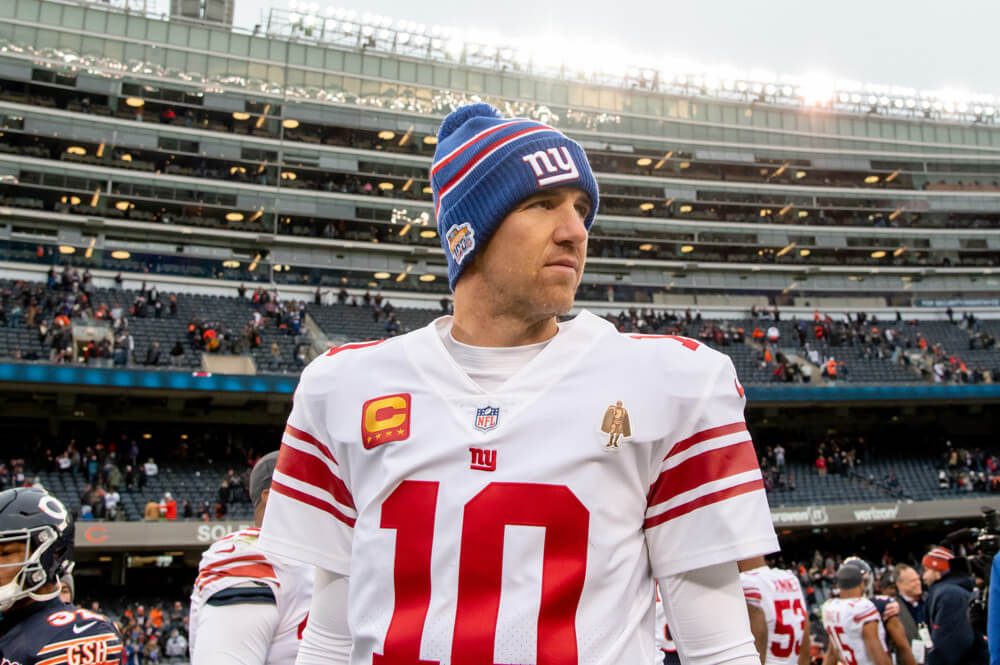 There’s not much of any guarantee on anything in tonight’s NFL game between the Philadelphia Eagles and the New York Giants.  The only certainty is that Eli Manning is coming back in for the Giants and is going to try to do a good job of filling in for the injured Daniel Jones under center.  Whether he can do it is a huge uncertainty.

Eli Manning In For Daniel Jones

Jones is responsible for the only two victories the Giants have seen this season.  Prior to being replaced, Eli Manning only had two touchdown passes and 556 passing yards, but threw two interceptions in the process.  Before this season, though, he was definitely the biggest offensive threat of the team, taking the Giants to two Super Bowl championships since coming onboard in 2004.

Even with Jones in the game, the Giants have not been the team it once was.  They have now lost eight games in a row and almost seemed to have taken a defeatist attitude, even though there was still enough time left in the season to push forward.  Still, putting Manning in might just give the Giants a little more energy and enthusiasm to try to win.

The good news for Eli Manning, as he tries to show everyone that he still has skills as he finishes up the last year of his contract, is that the Eagles defense isn’t so hot.  Philadelphia is 5-7 this season and the defense has had a lot of difficulty keeping things organized.  This could pay off for Manning and the Giants.  He’ll likely rely on running back Saquon Barkley a lot and, as long as he steps up, Barkley could threaten the Eagles defense.  However, if he continues in the slump he’s been in recently, it will just be more of the same out of the Giants that has been seen the past several weeks.

The Eagles are one game away from being on top of the NFC East standings, along with the Dallas Cowboys.  A victory tonight will put them up there, but they need to shake off the recent poor performances first.  They have lost three in a row, including against the Miami Dolphins this past Sunday in an embarrassing game that still has everyone scratching their heads as they try to figure out what went wrong against a team who has been weak all season.

That result is going to lead to an extra effort by the entire team, especially with so much riding on the game.  The Eagles know Eli Manning and know how he thinks, and the defense will be ready for almost anything he tries to throw their way.

The Eagles offensive line is going to be just as strong, thanks to Alshon Jeffery and Zach Ertz.  Not much has to be said about quarterback Carson Wentz, who can easily figure out the Giants pass defense.  The Eagles are looking at a strong, healthy offensive line and are going to take advantage of a weaker defense every chance they get.

The Eagles need this win to keep their playoff hopes alive, even if just barely.  The Giants are going to find themselves facing difficulty on both offense and defense, and Eli Manning is not going to be able to find his old rhythm.  This game should easily go to the Eagles and they will most likely control the game’s motion from the very first play.