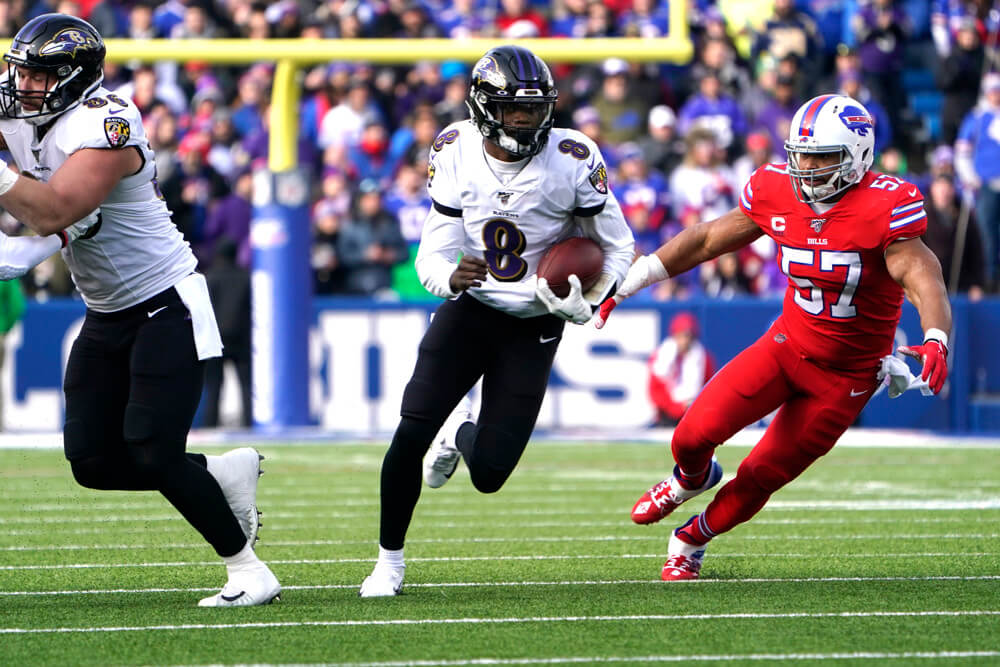 With only a handful of games left in the NFL regular season, gamblers are working to take advantage of every opportunity they have remaining to get in on the online gambling action.  There’s also postseason and the Super Bowl, the biggest sports gambling event of the year, but there are fewer opportunities to see huge paydays after the regular season concludes.  Yesterday was one of the biggest days of the season so far, with fans placing some massive bets in NFL Week 14 – and winning.

What Happened In NFL Week 14

Thanks to Marcus Peters of the Baltimore Ravens, the Buffalo Bills missed out on an opportunity to tie the score at the end of the game.  Peters got a hand on a Josh Allen pass, ending the drive and keeping the Ravens ahead.  It also allowed his team to cover the spread, and Allen wasn’t the only one celebrating his substantial feat.  Sportsbooks all across the country started rumbling as football fans screamed and jumped out of excitement.  Two of the bettors, both in Vegas, made most of the noise.

That high roller must have had a crystal ball.  He also put up a $100,000 straight bet on the San Francisco 49ers to top the New Orleans Saints and cover the 1.5-point spread, and they did.  The final score of 48-46 was just enough to win – both for the Niners and the gambler in NFL Week 14.

The Mirage didn’t expect things to be too busy yesterday.  The director of the casino’s sportsbook, Jeff Stoneback, was ready for a mundane day at the office, but that turned around just before kickoff when the two massive wagers made their way to the cage.  He states, “It got pretty wild a half hour before kickoff when these two different guys were literally betting the Ravens at the same time.”

The NFL performances in Week 14 were damaging to the sportsbooks’ bottom line, but positive for gamblers.  Another bet placed at MGM Resorts saw $300,000 on a straight bet for the Niners to win, and sportsbooks across the country were forced to pull out the checkbook.  Stoneback adds, “Those two games [Niners/Saints, Ravens/Bills] just wiped us out.  They were both gigantic losses for us. At this point, it is close to one of our worst days of the year.”

However, it wasn’t all disappointment for the sportsbooks.  In an example of easy come, easy go, The Mirage saw the bettor who won $270,000 on the Niners game give it all back.  He had placed a straight bet for the Seahawks to win against the LA Rams, which should have been a safe bet.  However, the Rams came out of nowhere and trampled the Seahawks, 28-12.

Most of the NFL games in Week 14 saw the favorite to win.  The San Diego Chargers had no difficulty against the Jacksonville Jaguars, the Atlanta Falcons easily beat the Carolina Panthers and the Tennessee Titans rousted the Oakland Raiders.  There were a couple of underdog wins, as well, as the Denver Broncos survived against the Houston Texans, the Kansas City Chiefs were all over the New England Patriots and the 49ers were not expected to beat the Saints.

Chuck Esposito, the sportsbook director for Sunset Station, expressed it best, at least from the sportsbooks’ point of view.  He stated, “Overall, it’s been a good day for the guests. It could be a small losing day for the books.  We needed the Bills, Texans, Saints, Browns and Panthers, and none of them got there. The biggest afternoon game was the Jaguars, and they lost as well.”