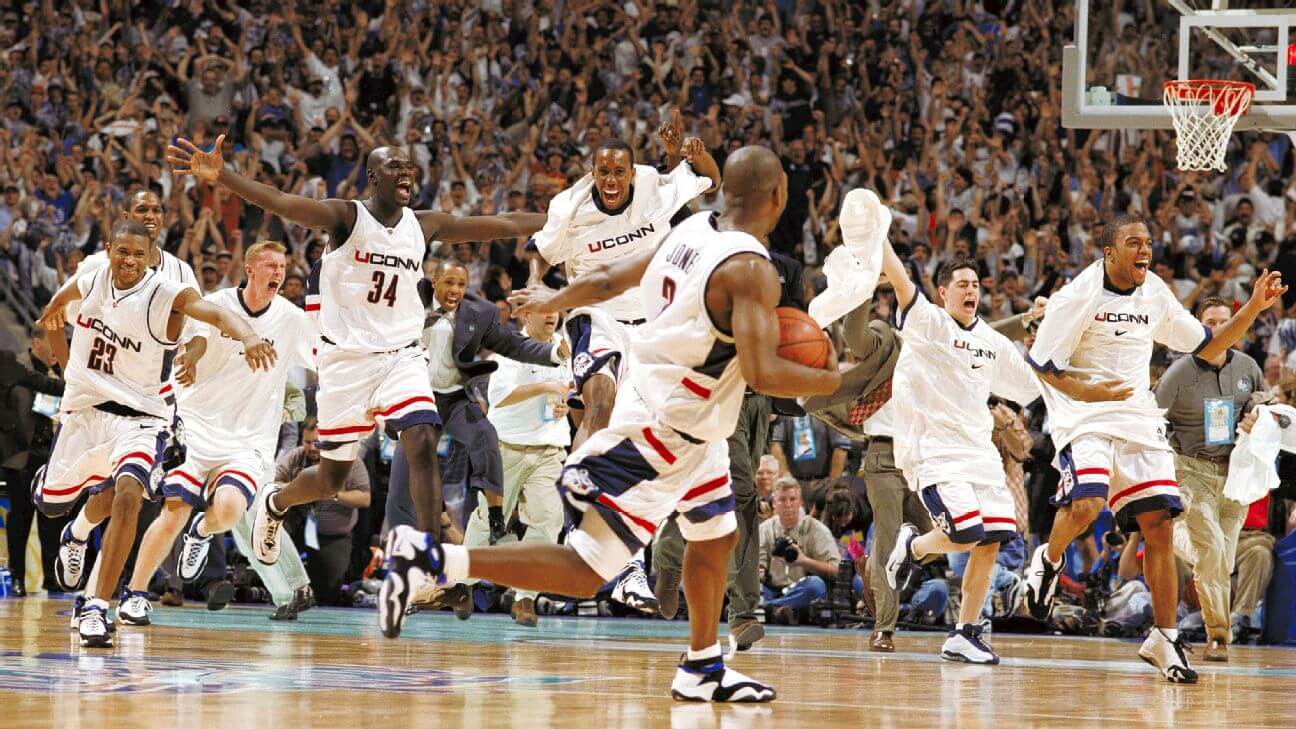 Monday night was supposed to be the night of the 2020 NCAA basketball championship game. It would have been for one lucky school and its fanbase the shining moment for another college hoops season.

The coronavirus robbed us of this special night, but it cannot touch or memories of championship games and moments from the past. The writing staff of SportsIntel.com got together to present our top NCAAB title games and championship moments — good and bad — the games and nights we’ll never forget:

Over a 23-year career with the Hartford Courant, the final eight as a full-time writer in the sports department, there were three times my personal rooting interests intersected with my professional duties. No day would ever be more special than writing the paper’s A1 story chronicling the ring ceremony for the curse-busting 2004 Red Sox at Fenway Park in April, 2005. Then, two years later, I covered my own World Championship season as Red Sox beat writer in 2007.

The third jewel in this triple crown came in 1999, when I was tasked with supporting our coverage of the UConn men’s basketball team’s run at the program’s first national championship. The Huskies were an institution in Connecticut, where I was born and raised. But it had only been in 1990 – Jim Calhoun’s fourth season in Storrs – that UConn had become a national power. From 1990-98, UConn reached six Sweet 16s and three regional finals, but lost all three.

Finally, in 1999, the Huskies, led by Richard Hamilton, Khalid El-Amin and Ricky Moore, made it all the way the Tropicana Dome in St. Petersburg, Fla., and a date with hated Duke in the title game. This time, there was no Christian Laettner to crush Husky dreams at the buzzer. Instead, it was the Huskies who shocked the world, pulling the upset, 77-74, as I watched from press row. UConn went on to win three more titles in Calhoun’s career, and I covered four UConn women’s titles over the next five seasons before moving on to the Red Sox. But that night at the Trop in 1999 will always be on the Mt. Rushmore of my favorite in-person moments in sports.

To recall one of the top NCAAB title games for the Carolina Tar Heels, there’s no need to travel too far back in time.  It was 2017, when the Tar Heels would come back to achieve a last-minute victory over the Gonzaga Bulldogs in a nail-biter that had every Heels fan on the edge of their seats.

Long after the NCAA reign of head coach Dean Smith had ended, Carolina would mount a performance against Gonzaga that showed to the players, and all the fans, what it really meant to be number one.

The game was hard-fought by both teams.  Gonzaga, who was a top contender for a deep run in this year’s March Madness before it was canceled, kept Carolina on its toes for almost the entire game.  However, the Bulldogs started to show a lack of energy, and ended the night with 14 turnovers.  This helped the Tar Heels, but it was the desire to win that really drove the team to victory.

With just 1:40 left on the clock, Carolina would take a one-point lead off a layup by Justin Jackson following an assist from Theo Pinson.  The clock had to be stopped shortly after, leading to a jump ball that was tipped by Kennedy Meeks, allowing Isiah Hicks to come in and hook up the Tar Heels with a backboard shot to give the team a three-point lead as the clock wound down to 25 seconds.

Meeks wasn’t done yet, though, and blocked a Gonzaga shot attempt that led to a Carolina recovery and a slam dunk by Joel Berry to put the exclamation point on the win.  It was a victory that had the stands roaring in appreciation, with Carolina capturing the championship, 71-65.

My favorite NCAA Championship game definitely has to be Villanova-North Carolina in 2016. Maybe it is recency bias, but all I can say is what a game! I’ll never forget the ending. The game was everything we expected, as it went back and forth from the tip. And, just when you thought ‘Nova was about to pull away up six with about 100 seconds to go, NC stormed back. Marcus Paige scored literally 8 points in 90 seconds on what seemed like back-to-back insane shots.

Of course, all of that was all capped off by Kris Jenkins’ 27-foot game-winner. Sometimes this gets lost in the shuffle, but let’s not forget about the amazing play draw-up by Jay Wright. Anyways, this is also a great memory for me, as I definitely won some money on this game. What, this is a gambling website, right?

The other three title games that were right up there for me were North Carolina-Illinois in 2005, Kansas-Memphis in 2008 and Virginia-Texas Tech in 2019.

The bad: I am a huge Derrick Rose fan and an Illinois fan, so both of those losses were soul-crushing for me. Those games were the closest I’ve come to winning from a fan’s perspective, considering my alma mater Marquette has never been to a Finals in my lifetime.

The good: Not a “real fan” of Virginia’s, but I will say I’ve enjoyed their run over the past few years. I like their coach, teamwork and defense, so I was definitely rooting for them last year. Especially since they had gotten bounced in the first round the year prior by UMBC and never stopped hearing about it.

I put this in the good category, because let’s just say I won more money on Virginia winning the title due to various futures bets and pools than on anything else I’ve ever wagered on.

When I was young I was a very lucky kid.  I had a good home life with great parents and a brother who was only an occasional jerk.  As with many young men, my dad was my hero and my hero was a huge University of Michigan fan.

My father at that time to me was a rather stoic man who kept a level head at all times.  Growing up in the 50s in Brooklyn hardened him and I did not see much strong emotion in my younger years.  At least during the week, that was true.  On Saturday’s when we sat and watched the Wolverines on the gridiron or on the court is when my dad really came alive.  I not only enjoyed watching the games themselves but also really liked to see my father so excited for Michigan’s success.

But the Wolverines didn’t always win, and that is what this story is about.

See, back in the 1980s and 90s, Michigan was a much bigger force in the NCAA than they are now.  While this mostly applies to football, their basketball team had a lot of success over those two decades as well.  Following two Big Ten titles and a National Championship in 1989, Michigan was able to recruit one of the most talented classes in history back in 1991.

I had never felt such a buzz around a Michigan team like this one.  Granted I was 7 years old, but I was working with what I had.

The Wolverines were prepared to start five freshmen, four of whom were McDonald’s All-Americans and all four ended up playing in the NBA.  Hell, one of those guys is the head coach of this team right now.  That is how much talent and success this team found.

It was a dream scenario, to say the least.  Michigan went 25-9 during the regular season and was ranked for each and every week the AP Poll was active.

Once the regular season ended, the Wolverines hit the NCAA Tournament with a full head of steam and all the talent to make the most of it.

I watched week by week, the nerves of my father loosening as he became more and more confident that his team would win their second title in three years. It was the first time in my life that I remember actually looking forward to something each week.

The Wolverines won and won and made it all the way to the National Title game against the Duke Blue Devils.  Duke was coming off what is considered one of the top NCAAB title games in basketball history.  Trailing by one with under two seconds to play, Grant Hill went deep and hit Christian Latterner with a ¾ court inbound assist for a fadeaway jumper from the free-throw line.  As amazing as that games and finish were, we were still filled with confidence in our team.  They were the first team to make it to the National Title game with 5 starting freshman and we had no doubt they would get the job done.

Things started off great, with the halftime score 31-30 in favor of our boys in maize and blue.  We sat and watched the halftime show with little patience, ready for the team we loved to finish the job.

I remember spending almost as much time watching my father as I did the game. He was literally on the edge of his seat, leaning painfully close to the television like a kid who accidentally discovered the Playboy channel for the first time.  Hands clenched in front of him, almost as if in prayer.

Just when I felt like nothing could derail the moment we were about to share, something did.  That something was the complete meltdown of the team I loved and adored to much.  They scored just 20 points in the second half while allowing Duke to rattle off 41.  For those not versed in complex math, that led to a 71-51 loss for our team.

I watched as my father’s dreams were crushed in a matter of 15 minutes.  And I learned a lot of those 15 minutes.  While much of my education came in the form of these new words which he kept shouting at the TV.  Many of which had just four letters, I also took some deeper lessons from that day.

I learned what it looks like for a grown man to go through such a roller coaster of emotions.  It taught me that no matter how far ahead you think you are, you can’t count your win until the game is over.  It taught me the power of passion.  For a man who rarely reacted in a big way to anything, he just spent the better part of two hours being ruled by those elusive strong emotions.

But perhaps the most important thing I learned that day was that heroes were people too.  People that laugh and cry, scream, shout and maybe even throw a few mini hot dogs at the television screen.  The people we look up to are just like us.  Full of complexities, hidden passions and the vocabulary of a sailor with Tourettes.

Truth is, we can all be heroes to the right person.  So ask yourself, who do you want to inspire?