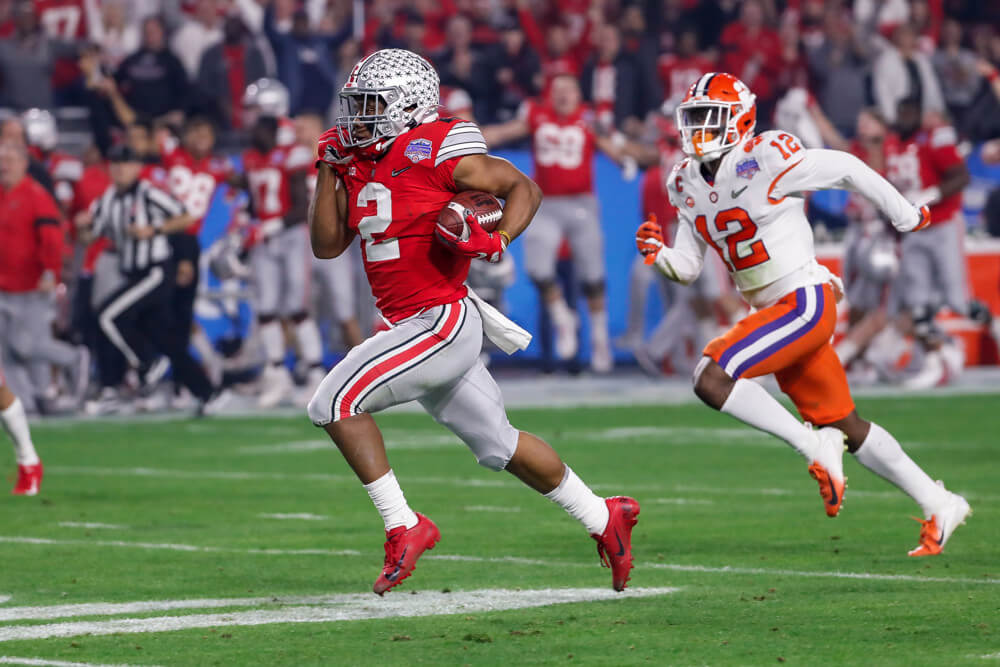 There’s no doubt that a lot of attention in the upcoming NFL Draft will be placed on the quarterback offerings.  With many talented QBs in the lineup, and a great number of teams without strong support under center, the first round of the draft will almost certainly be dedicated to finding homes for Joe Burrow, Tua Tagovailoa and others, followed with a look at wide receivers and, if there’s any room left, cornerbacks.

This isn’t to say that other positions don’t need to be filled – there is still a lot of work to be done if certain teams expect to bounce back from their abysmal performances this past season.  Looking at the field of running backs that are coming up to the big leagues, there is a lot of skill headed toward the NFL, but the players don’t need to get discouraged when teams relegate them to the second and third rounds of the draft.

Christian McCaffrey just became the highest-paid running back in the NFL when the Carolina Panthers gave him a $64 million, four-year extension.  However, he’s the exception, not the rule and the NFL-bound players don’t need to start seeing those types of dollar signs in their eyes.

Having said that, though, J’Kaylin “JK” Dobbins could be well on his way to quickly rising in the ranks.  As a starter for the Ohio State Buckeyes, he showed incredible skills up and down the field, especially as a short-yardage runner.  In the 2019 season, he recorded 21 rushing touchdowns to hold the season record for the Big Ten.  He could end up with the defending Super Bowl champs, the Kansas City Chiefs, or a team, such as the LA Chargers, looking to rebuild its offense.

Right up there with Dobbins is D’Andre Swift.  The Georgia Bulldog picked up 1,218 yards last season, and is already considered to be a pro-level player.  If any back could be selected in the first round of the draft, it could be Swift, but that still isn’t likely.

The Miami Dolphins are said to be highly interested in trying to bring him to Florida, and they can certainly use the offensive help.  With several first- and second-round draft picks at the team’s disposal, there’s a good chance the Fins will make a move on him.

Jonathan Taylor knew what he wanted to be from an early age, but didn’t know why.  His first attraction to football came because he wanted to be able to spend time with his cousin and soon realized that he had real talent for the game.  Taylor has incredible speed – he’s a two-time New Jersey State champ in the 100-meters and the 4×100-meter relay – and knows how to get things done on the field.

Having been accepted to attend Harvard University, he opted for the Wisconsin Badgers because he saw it as a definite path to the NFL.  He was right, and any time looking for explosive strength is going to be interested in his talent.  Taylor weighs over 220 pounds, but still scored as one of the fastest running backs in the recent combine at 4.39 seconds.

Clyde Edwards-Helaire out of LSU is ready for primetime football.  He is coming off a stellar performance that allowed him, along with Burrow, to secure the National Championship victory this past season, as well as secure his name as a powerful force for the NFL.  Across his career with the Tigers, he racked up 2,103 yards and 23 touchdowns, with much of his success being shown as a senior.  Also versatile as a receiver, having caught 69 balls for 595 yards, Edwards-Helaire is going to find a home quickly, possibly in the second round.

One Week Until First Fully Remote Draft In NFL History

Of course, all of the action is still contingent on there not being any major issues when the draft is held April 23-25.  With all team representatives calling in from home to participate, this is a monumental technical challenge for the NFL.  Any issues could result in teams throwing out a coach’s challenge and asking for a booth review.  Hopefully, it won’t come to that.