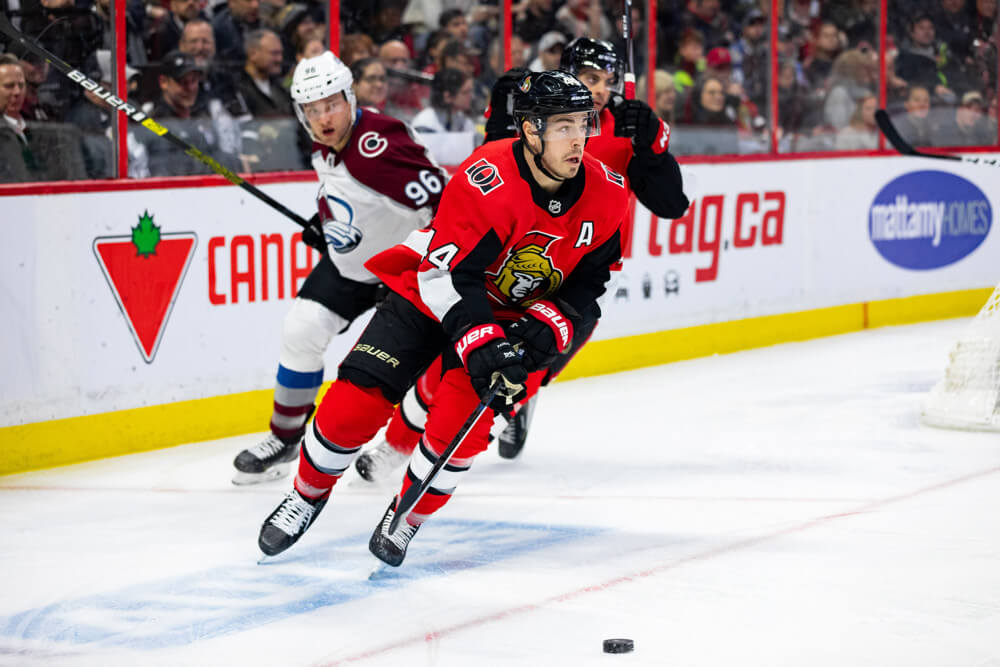 The NHL trade deadline is now just around the corner, less than two weeks away and there are plenty of rumors about potential deals.  Fans can expect to see a lot of movement and last-minute deals, and there are quite a few shuffles expected.  Some, like Toronto Maple Leafs picking up Jack Campbell and Kyle Clifford, and Alex Galchenyuk and Jason Zucker switching places on the Pittsburgh Penguins and Minnesota Wild, have already been completed, but this is just the beginning.  Much more is still to come.

Jean-Gabriel Pageau of the Ottawa Senators could soon be packing up for a new home.  He started the year off on the right skate, but has slowed down since last November and, according to analysts, there has not been any talk about extending his contract with his current team.  With that being the case, he could soon be up for adoption.

Chris Kreider of the New York Rangers is also short on time.  A possible contract extension is currently being discussed, but, if the two sides can’t come to an agreement, he might be packing his bags and heading elsewhere.

Pierre Engvall just got saved by the bell when the Maple Leafs decided to extend his contract for another two years.  The deal was just set on paper today, and Engvall will pick up $2.5 million for the period.  He will also be eligible to be drafted by the still unnamed Seattle expansion team.  The rookie is still breaking in his new skates, racking up seven goals and 14 points in the current, and his first, NHL season.

The Boston Bruins are having a great year, but perhaps not great enough.  They have beat a number of strong teams; however, might run into difficulty should they face the Washington Capitals in the playoffs.  With that in mind, the Bruins could look to make some changes ahead of the NHL trade deadline, but there are no real solid rumors and nothing conclusive has yet been released.

The Minnesota Wild have a chance to make it to the playoffs, and looked to further secure a spot by releasing Jason Zucker to the Penguins in exchange for Alex Galchencyuk, prospect Calen Addison and a conditional first-round draft pick.  That certainly should give the Wild an edge, but more trades could be coming.  If any player demonstrates anything less than a commitment of 100%, GM Bill Guerin is ready to drop him.  He told reporters yesterday, “I wholeheartedly expect this team to compete for a playoff spot. We’re right there. And if there’s any signs of anybody taking their foot off the gas, that will be an indication.”

The St. Louis Blues got a scare last night when Jay Bouwmeester suddenly suffered a “cardiac episode” and collapsed halfway through the first period of a game against the Anaheim Ducks.  Medical personnel from both the team and the stadium reacted quickly, possibly saving his life.  Blues GM Doug Armstrong released a statement after the game, stating, “With 7:50 remaining in the first period of our game tonight, Jay Bouwmeester suffered a cardiac episode and collapsed on our bench after completing his shift. Thankfully, with the quick response of our medical trainers, Anaheim medical trainers and their team physicians, they were able to stabilize Jay. He was alert and moving all of his extremities as he was transported to UC Irvine Medical Center. Currently, Jay is conscious and alert as he undergoes further testing by Anaheim’s physicians. We will update Jay’s condition on Wednesday morning.”  Those tests are now underway, and the game was postponed.

Brendan Perlini of the Detroit Red Wings zigged when he should have zagged during a game against the Buffalo Sabres.  It’s actually a little surprising there isn’t more of this, but the forward caught Henri Jokiharju’s skate to the face, leaving him with a nasty gash.  Fortunately, he was able to skate away and was stitched up at the rink.

Milan Lucic is a tough player, and he’s not afraid to admit it.  The Calgary Flames left winger collects penalty minutes like some people collect stamps, racking up 91 minutes in the box across 79 games.  Some of his assaults have been more gruesome than others, but players might be getting tired of his antics.  Stefan Noesen of the San Jose Sharks doesn’t appreciate his blindsided attacks on players, which has become his modus operandi, and thinks it’s time for the league to take more action.

He asserted after his team lost to the Flames Monday, after a particularly brutal hit against teammate Mario Ferraro, “That’s back-to-back games [Lucic] has had the exact same hit.  Same player, same everything. Something’s gotta change. You can’t … you can’t let that guy do that every single time. Luckily, Mario didn’t get hurt this time. Last time, he had a bloody eye. If he goes down and he’s laying on the ice, it’s probably going to be a suspension. But the fact that he got up right away, they’re not going to call anything like that. To me, it’s bulls–t.”