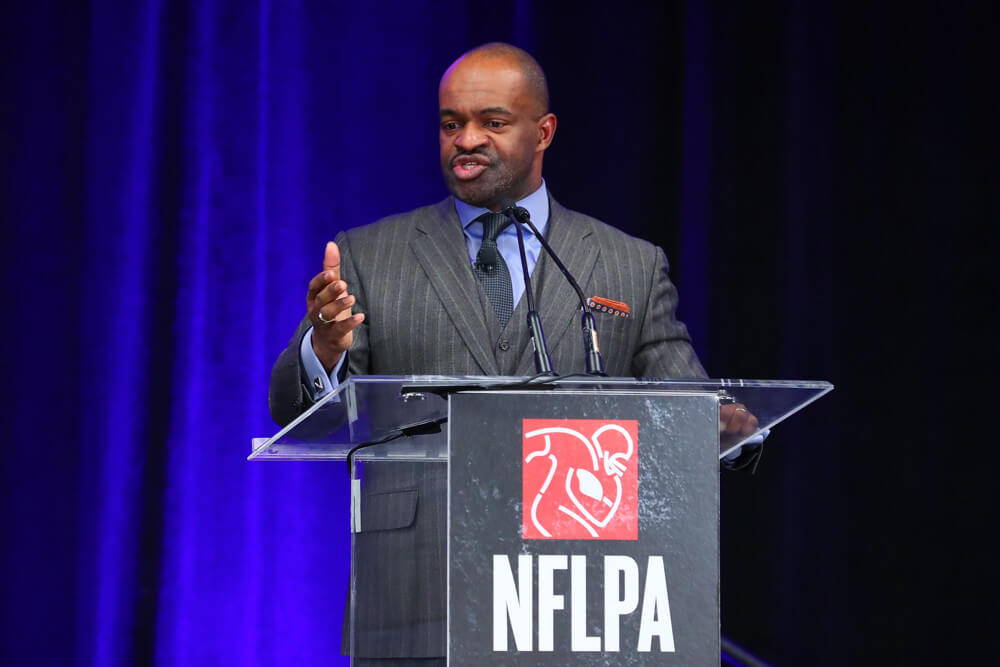 NFL players are feeling overworked and underappreciated, so big changes could be on the horizon with the new NFL CBA.  Sure, there are those that earn multimillion-dollar salaries every year, but, as a group, the athletes are beginning to realize that they have more on the line than the league recognizes.  As this epiphany sets in, things could be set to change – and change in a big way.

What Changes In New NFL CBA?

Players want to be seen as business partners to league owners, and the league itself, and are going to try to force a huge transition in the way the NFL operates in the new collective bargaining agreement (CBA).

The new CBA negotiations are going to come up in NFL season 2021.  It is then that the players could seek a complete alteration of the league’s structure.  From a bigger piece of the revenue to better long-term health care, the NFL Players Association (NFLPA) is ready to try again what it attempted in 2011 – see more benefits and better status in the league.

Of course, in 2011, the plan didn’t go too well.  The 18-week lockout finally broke in favor of league owners, but this time could be different.  Players have learned from the errors they made the last time around and are more heavily involved already in campaigning for their next big move.  DeMaurice Smith, the NFLPA’s executive director, is on a six-week trip around the country, making stops at all 32 teams to tell players that something big is coming.  He’s telling them to start saving money now because, according to a presentation he gives, a “work stoppage is coming.”

Based on the average NFL salary, players shouldn’t have any trouble making ends meet and saving for a rainy day.  Around $900,000 a season should be plenty of money to be able to squirrel some of it away.  However, most players, throughout the history of the NFL, have not been savvy when it comes to financial planning and don’t look deep into the future.  Many often have to resort to loans and other means for securing short-term cash, even if it means being stuck with outrageously high interest rates from loan sharks.

Ryan Harris, a former offensive lineman for the Denver Broncos, saw firsthand how players threw money around, not caring about the future.  He explains, “Guys were almost flaunting that they were out of money, where they were like, ‘I’m out of money!’  There were some big-time guys. It was not like guys were asking for 500 bucks. Teammates were asking me for $75,000. I’m like, ‘Dude, what are you doing this month that you have a $75,000 need?'”

That lax position was what cost the players their shot at better negotiations in 2011.  However, as financial awareness has risen, things will be different this time around.  Player royalty checks and union dues are being stored by the NFLPA in the event players need to be bailed out during a standoff during the new NFL CBA negotiations, and this is going to make a difference.

Also, according to an informal poll by ESPN, the majority of players in the league are now saving about half of what they earn.  Owners are going to have a much more difficult time not bending more when they sit down with the NFLPA in less than two years.

Akeem Spence, a defensive lineman currently with the Jacksonville Jaguars, explains it best.

“If we want the things that we claim we want, guys have got to prepare themselves not to play football in 2021.  Guys have to be willing to hold out and fight for what we want so younger guys coming into this league, they can get health care for life, higher guarantees, higher base salaries — all the stuff that other sports have that we don’t and that we’re striving for. Save, don’t have any crazy investments and just try to live a normal life.

“That’s what I try to strive for myself and just live real basic so when push comes to shove, hey, I can do this [work stoppage] for three, four, five years, no matter how long.  Bring it on, man.  Bring it on!”