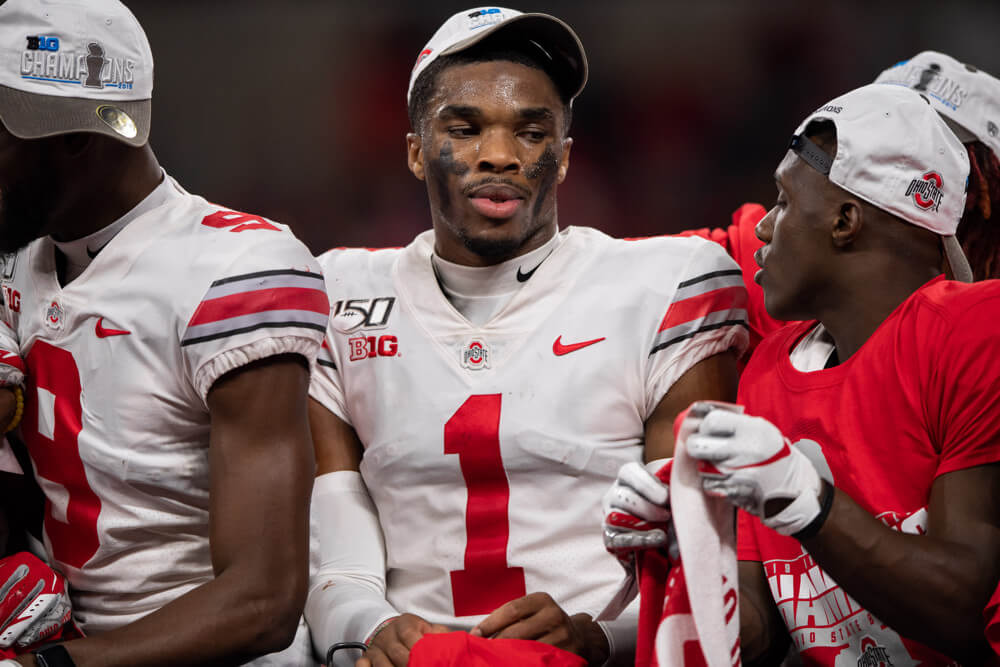 With only two days standing between sports fans and the NFL Draft, the picture that’s emerging of the upcoming virtual event is not the prettiest.  Hundreds of connections will need to be made to get everyone online at the same time, and trials currently being run – tests that only have a few people connecting – aren’t going over so well.

A lack of bandwidth, a lack of technical knowledge and more are setting the draft up to be interesting, to say the least.  Provided the kinks and bugs (and technological ineptitude) can be overcome, several defensive backs are ready to score top placement on NFL teams.

All Eyes Are On Buckeyes

The Ohio State Buckeyes possess one of the best cornerbacks in the NCAAF, but not for much longer.  Jeff Okudah has been billed as the top defensive back in the draft, and some expect him to go in the first five picks.  On his way to picking up unanimous All-American honors this past season, he picked up three interceptions, nine pass breakups, kept opponents to under 50 yards in all games and allowed just one touchdown.

He has a 41” vertical, helped with his 32 5/8” arms, which is going to come in handy in the big leagues.  When scouts have been asked what they didn’t like about him, the standard response is “not much.”

Trevon Diggs has made a name for himself as a productive cornerback, and his inspiration comes from a high place.  His older brother is Stefon Diggs, who just jumped from the Minnesota Vikings to the Buffalo Bills.  With the Vikings, the wide receiver logged 365 catches for 4,623 yards, adding 30 touchdowns to his list of accomplishments.  The younger Diggs built his talent on the family competitive spirit, and it served him well.  He is a top SEC pass defender and has a unique ability to read the offense.  Diggs is most likely a top-ten draft pick, hoping for a spot on an AFC East team so he can show his big brother who’s the boss.

Utah’s Jaylon Johnson believes in excelling at everything he does.  He is highly athletic and could have gone either the football or the basketball route (at least one Ivy League team tried to recruit him for basketball).  He has, so far, chosen football and it is paying off.  He made second-team All-American in 2019, which probably would have been higher if it hadn’t been for three dropped interceptions.

However, he still has enough skills to make it as a top contender, with a number of interceptions and breakups across his college career.  If the NFL doesn’t work out for him, though, he will always have a Plan B.  He completed his degree in Economics while at Utah, and could probably help the government balance its budget.

As a freshman in college, C.J. Henderson was already setting his sights on the NFL.  He jumped from running back to cornerback after high school, envisioning a better chance of making it on the other side of the ball.  He was right, and his ability on defense has skyrocketed.  He was first-team all-SEC as part of the University of Florida, picking up some All-American nods along the way.  His junior year showed most of his talents (an ankle injury sidelined him in his senior year), and he didn’t allow any touchdowns through his coverage, leading to an opponent passer rating of just 24.1.  Provided the ankle injury isn’t seen as a hindrance, he should be a first-round pick.

Kristian Fulton could have been at the top of the list of defensive backs looking to get a start in the NFL.  However, the LSU cornerback fell against the NCAA’s sword in 2017 for tampering with a drug test and ended up missing an entire season that year.  It could have been worse – the NCAA wanted him out for two years, but he successfully appealed the suspension.  After getting back onto the field, he was more determined than ever to turn himself around and show the football community that he learned his lesson.

In this last season, he recorded one interception, 14 pass blocks, 20 forced incompletions and allowed just a 39% completion rate.  If it hadn’t been for the lost year, there’s no telling how much better he would have been.  Despite the misstep, he is still among the top five defensive backs ready for the draft, and teams are undoubtedly going to forgive his previous transgression due to his skills.