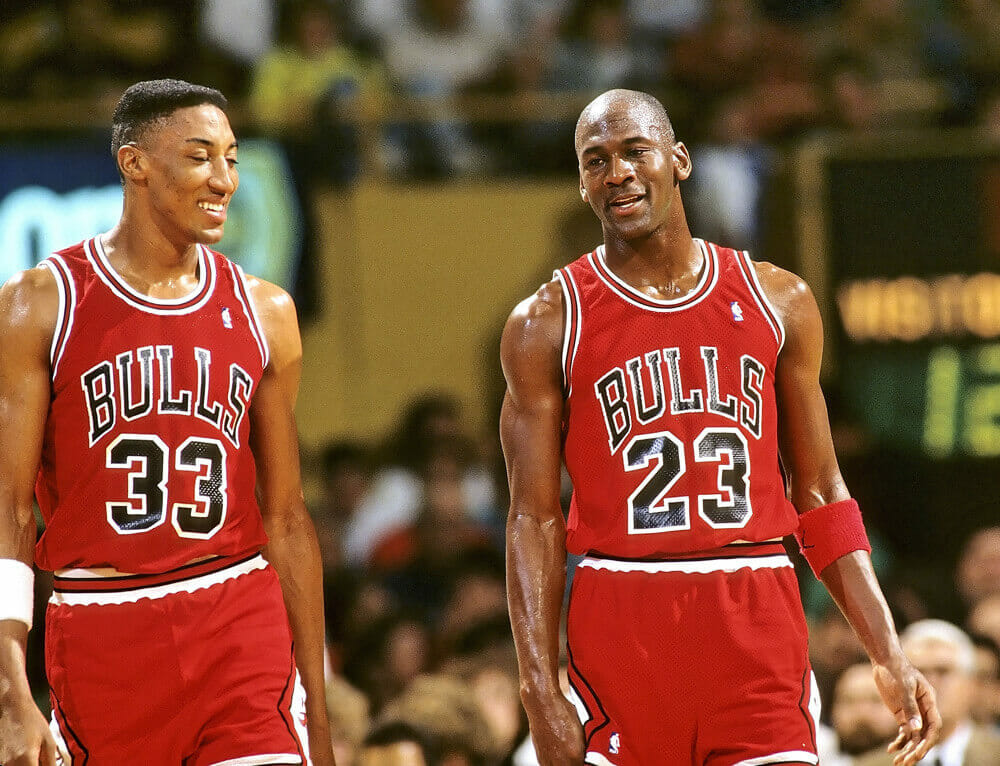 The most-eagerly awaited sports docu-series in recent history finally hit the screens last night, as the first two episodes of The Last Dance premiered on ESPN.

Last night we got to see the first two episodes in the 10-part docu-series chronicling Jordan’s final championship season with the Chicago Bulls. It did not disappoint. Much of the first two hours were dedicated to laying down the origin story for Michael Jordan, Scottie Pippen, and the Bulls as a franchise. We also were privy to never been seen before exclusive footage and brand new interviews.

Even though we know the outcome of The Last Dance, it didn’t make the behind-the-scenes, tell-all documentary any less gripping. For instance, even though most of us already know what happens with Pippen, at the end of episode two, you are kind of left asking yourself what’s next?! That is how well it was done. Again, just my opinion. Maybe it’s the absence of sports and norm in the world making me overthink like that, who knows?
Either way, every week I will be recapping the episode with some of my favorite moments. Here are a few that stuck out:

The Former Presidents
It was hilarious to me that two former Presidents were interviewed and yet neither were labeled as former Presidents in the documentary. If you remember, Barack Obama was labeled “former Chicago resident”, while Bill Clinton had “former Arkansas Governor” next to his name. Brilliant.

The Pre-Jordan Bulls’ “Traveling Cocaine Circus”
Since I grew up in Chicago and have been a Bulls fan my whole life, I knew most of the stories in the documentary. Pretty much all of them, except this one. The name made me love this even more. The Bulls were awful before they drafted Jordan. The G.O.A.T. is asked on camera about the Bulls reportedly being called a “traveling cocaine circus”. After the question elicits a huge laugh from Jordan, he talks about the story where he witnesses his teammates’ illicit drug use at a hotel party:
“So they open up the door. I walk in, and practically the whole team is in there,” he said chuckling at the recollection of the incident. It was things I had never seen in my life as a young kid. You got your lines over here, you got your weed smokers over here, you got your women over here.

“The first thing I said is, I’m out. Because all I can think about is if they come raid this place right now, I am just as guilty as everyone else in this room. From that point on, I was more or less on my own.”

The Origins Of The Title: ‘The Last Dance’
Before the doc began, my wife and daughter asked me why it was called The Last Dance? Of course I knew the answer, but I had to break it down for them that it was decided before the Bulls even began the 1997-98 season, which would in fact, prove to be the team’s last dance.
Phil Jackson knew that year would be his final year in Chicago and decided to use it as a great motivational tool for his players.

“I talked to the players about particularly how important it was for us to really be together in this last run that we were going to have, so I called it the last dance.”

Golden State Warriors head coach Steve Kerr added: “Phil [Jackson] always looked for a theme for every season, and given that it was the last year we were gonna be together — management had already made that decision — in typical Phil fashion, he had a name for it.”

It still blows my mind to this day that you can have that much success as a coach and still have your GM tell you that. Insane.

Jerry Krause: The Villain
Before The Last Dance, there was Sam Smith’s Jordan Rules. I loved that book when I was younger. It talked about the Pistons years (which we will see next weekend), but more importantly, all the drama surrounding the team. Especially pointing out Jerry Krause.

As we knew from back then and now by re-living it in the episodes, the former Bulls general manager was not a popular man among the players going into the 1997-98 season. By the time Jordan’s final season with the Bulls got underway, Krause had a frosty relationship with Jackson, Jordan, and Pippen. And that is putting it lightly.

All three felt disrespected in their own ways. I don’t think it helped when Krause claimed that organizations mattered more than players and coaches.

It is important to point out that in the doc, Krause says he was misquoted and that he said, “players and coaches alone don’t win championships, organizations win championships”. Why try to make that point either way?
Also, we did not see it in the documentary but some of the stories from back in the day are even wilder when it comes to Krause vs. the Bulls. Like how they used to call Krause “crumbs” to his face, because he was always eating and had crumbs on his clothes when they saw him.

Before episode two ends, we also get a deeper look into Krause’s bitter feud with Pippen. Scottie describes Krause as a “compulsive liar”. At the end, you see Pip’s demand for a trade for the second time in three years. Money being the biggest issue, as even though he was the second-best player on the team and one of the best players in the entire league, Scottie was the sixth-highest paid player on the Bulls.

“He deserves a lot of credit [for building the team],” Kerr said. “But he couldn’t get out of his own way.”
Krause passed in 2017, so we only have old footage of him. I wonder how much more will come out in regards to him, but the general theme of Krause as the villain will definitely remain throughout this series.

So there you have it, those were some of my favorite highlights from the first couple episodes. Next week we are going to get a look at the Jordan Rules and Detroit Pistons years. Also, supposedly a Rodman episode. And, from everything I’ve heard, these first two episodes were “tame” compared to what we are going to see next.

From a ratings point of view, last night boomed. With no live sports and a captive audience of viewers in quarantine due to the coronavirus pandemic, it felt like The Last Dance had the entire country’s attention. So much so, that according to the Sports Business Journal’s John Ourand, it did big-time viewing numbers:

If the first two parts are any indication, the docuseries is going to live up to its immense hype. Sunday can’t get here fast enough!