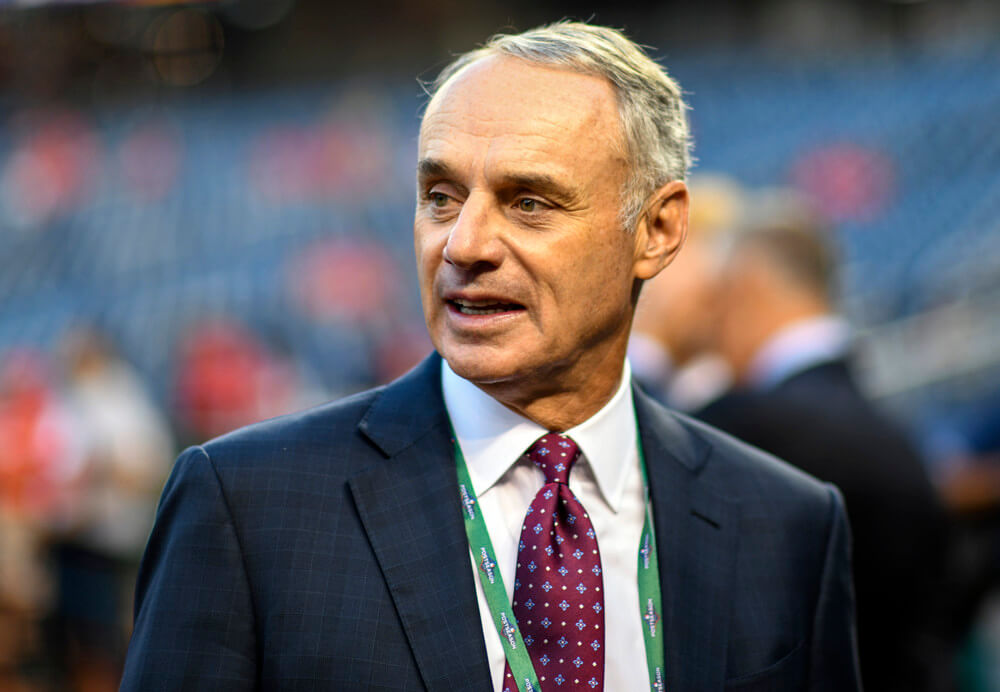 With the MLB still mulling plans over to put together a viable solution that would allow players to get back on the field and fans to get their baseball fix.  There have been several ideas floating around about how this might happen, including corralling all players into Phoenix, AZ to play games at the handful of fields the city has available.

While this idea hasn’t met with overwhelming support, it would be better than nothing.  However, the league is now working on some other alternatives to get the games going and show the coronavirus who’s really the boss.

Instead of just one state where baseball action could take place, perhaps three would be a more palatable number.  This is one of the latest proposals said to be circulating around MLB offices, with perhaps Arizona, Florida and Texas being the ideal targets.  Any field suitable to hold a major league game would be an option, and each area would be assigned ten teams for their contests (or, perhaps, 12 teams in one and eight in the other two).

The games would most likely need to be held in front of fan-less stands, but this is not yet an ultimatum.  Even Dr. Anthony Fauci, who’s leading the government’s efforts to combat the coronavirus, feels that there is an outside possibility of inviting fans to the games, as long as they wear facemasks.

He was interviewed by Jack Curry of the YES Network Monday when Curry made the suggestion, and Fauci added, “That is possible.  But as you said, and I affirm what I have been saying, it’s going to be the virus that determines what the timetable is. Because if we get the virus under really good control and certain regions of the country can get gradually from the gateway to the phase one to the phase two to the phase three, it is conceivable that you may be able to have some baseball with people practicing physical separation.

“Namely, you don’t pack a stadium.  I think quite likely, although it’s always dangerous to predict, I think it’s more likely that you’re going to have more of a television baseball than a spectator baseball.”

However, it’s not that easy.  Virtually any shift in operations, including the tri-state initiative, has to be approved by the MLB Players Association (MLBPA).  While they might not be opposed to the idea, they have to agree to pay cuts, which would almost certainly be expected from team owners.  No fans in the stands means less revenue, and the teams will want the players to help offset the losses.

The Show Will Go On, One Way Or Another

MLB Commissioner Rob Manfred is not letting go of his dream to see the 2020 baseball season be played out.  It was just as Opening Day was set to begin that COVID-19 came in and disrupted everything, but Manfred doesn’t want to leave fans disappointed and without their favorite game (although that’s probably not the primary reason).  He isn’t exactly sure how quickly the league can get on its feet, but, according to Jeff Passan of ESPN, the commissioner asserts, “I fully anticipate baseball will return this season.”

So far 18 MLB teams have agreed to pay their operations employees through the end of May, which is a very substantial move.  That still leaves another 12 to step up to the plate, but it’s up to them to make the decision.   The teams to have agreed to the compensation packages are the Arizona Diamondbacks, Atlanta Braves, Boston Red Sox, Chicago Cubs, Chicago White Sox, Cincinnati Reds, Colorado Rockies, Detroit Tigers, Houston Astros, Kansas City Royals, Miami Marlins, Milwaukee Brewers, Minnesota Twins, Philadelphia Phillies, San Francisco Giants, Seattle Mariners, St. Louis Cardinals and Toronto Blue Jays.

The Legal Fallout Of COVID-19

As if dealing with a major global pandemic and almost no revenue, MLB is going to have to deal with another headache.  A couple of fans out of New York have decided to sue the league, arguing for the lost money they provided for season tickets for the New York Mets.  Included in the lawsuit are Manfred and all 30 teams, and the duo hopes to have their lawsuit certified as a class-action case.

The lawsuit asserts, “Baseball fans are stuck with expensive and unusable tickets for unplayable games in the midst of this economic crisis.  Under the pretext of `postponing’ games, at the directive of MLB, teams and ticket merchants are refusing to issue refunds for games which are not going to be played as scheduled — if ever.”  Ticketmaster, Stubhub, Live Nation and Last Minute Transactions are also named as defendants.