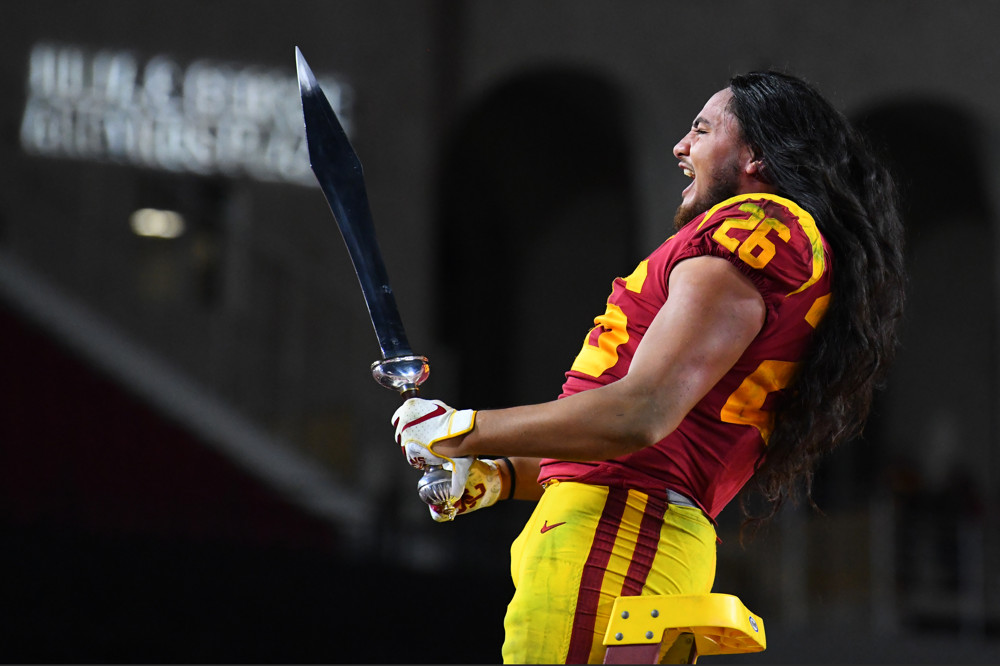 We continue on our quest for College Football betting profits in week 9 with a trio of best bets for your wagering pleasure.

USC Trojans (-440) at Colorado Buffaloes (+350)
Friday, Folsom Field | 9:00 PM ET
Pac-12 rivals USC and Colorado square off Friday night with the Buffaloes sizable underdogs with a spread set at 12.5.  The Trojans look to carry the momentum over from a big-boy win over Arizona last week by a score of 41-14.  Not only would this game keep USC’s winning streak going but it will also further their quest to finish atop the Pac-12 South.

With such a high-powered offense who is firing on all cylinders, the Buffaloes will have a tough time keeping this one close.  Despite losing their starting quarterback early in the season, USC lucked out with backup Kedon Slovis who has 1,219 yards and 9 touchdowns so far in relief.  He has kept the USC offense rolling to an average of 30.7 PPG off 431.6 average all-purpose yards.

On the flip side, the defense which Colorado has been trotting out each week is woefully undermanned to handle such an offensive attack. So, what other options do they have?  Well, the only other option is to try and keep up with the Trojan’s passing attack.  Sadly, Colorado doesn’t have what it takes on that side of the ball to compete with USC either. Their last time out, the Buffaloes managed a scant 129 yards in the air and a pair of interceptions against Washington State.

Taking all of this into account I don’t see Colorado having enough in the tank to keep things close against such a talented USC offense.  I like USC to win this game by a pair of touchdowns and cover this double-digit spread.
Best Bet: USC Trojans -12.5

Wisconsin Badgers (+445) at Ohio State Buckeyes (-625)
Saturday, Ohio Stadium | 12:00 PM ET
Wisconsin, coming off the worst upset so far this season, heads to meet up against Big Ten Rivals, Ohio State.  This game really can’t come at a worse time for Wisconsin after such a shocking loss to Illinois, which about ruined the Badgers chance at a National Championship run.  Will they fold under the pressure of playing at Ohio State or be able to channel their frustrations into an upset win of their own?

Illinois was supposed to be a minor speedbump during the season for Wisconsin but turned into much more of a treacherous obstacle.  Perhaps Wisconsin was so focused on this Big Ten showdown that they overlooked the capabilities of Illinois.

It’s hard to say that kind of lasting effect such a devastating loss will have on these young men, but I see this more of a fluke loss than anything else.  The fact is, this loss was a clear-cut case of the Badgers being so laser-focused on Ohio State that they let one slip by.  With this in mind, I think it’s important to consider Wisconsin’s entire season of positive results and not dwell too much on this one game.

I think they lean heavily on Jonathan Taylor who is a real bruiser and will easily surpass 1,000 yards rushing on the year.  If they can get him going early it will open things up for the passing attack and give Wisconsin a real shot at an outright win this weekend.

Ohio State, on the other hand, strolled into Illinois and dismantled the Northwestern Wildcats 52-3 and continue to keep their record unblemished. Sophomore Justin Fields shined with four touchdown passes while J.K. Dobbins continued his campaign for a Heisman Award with 121 yards on the ground and a receiving TD.

I like the Badgers to manage the clock well in this game and limit Ohio’s offensive snaps and the damage which Fields and Dobbins can do.  While I believe an outright win is more of a pipe dream, I really like Wisconsin’s chances to keep this game within two touchdowns and cover this spread.  Even taking into account last week’s failure, the Buckeyes are that much better than Wisconsin is and the Badgers are going to prove that come Saturday afternoon.
Best Bet: Wisconsin Badgers +14.5

Notre Dame Fighting’ Irish (-115) at Michigan Wolverines (+103)
Saturday, Michigan Stadium | 7:30 PM ET
Much like Wisconsin, Michigan is coming off a tough conference loss last weekend to the Penn State Nittany Lions 28-21.  The look-ahead lines had Michigan as -2.5 favorites but after the events of last week the Irish have taken over as slight favorites at -1.0 on the spread.

The main key to success for Notre Dame will be to establish their run game early on and keep the Wolverines defense off balance.  Tony Jones Jr. is a dangerous running back who will command a lot of attention whenever he lines up on offense.  This will allow Ian Book some more time and room to work as he looks to cut up the Wolverines defense.  The Irish rank in the Top-25 of points per game (39.2), yards per carry (5.3) and yards per pass attempt (8.7).  Their defense has also been playing at a very high level this season, ranking in the Top-15 in points allowed per game (16.8) and opposing yards per carry (3.9).  They will look to force Michigan into a lot of 2nd and 3rd and ten situations and force them to rely on the passing game more than the Wolverines would like.

While the Wolverines dropped last week’s game to Penn State, there is a lot to like about their performance.  They outscored the Lions 21-4 in the second half and finished with 417 total yards on offense compared to Penn State’s 283.  Perhaps most importantly, Shea Patterson finally looked relaxed and settled in the pocket like the player he was back in his days at Ole Miss. Will this be the spark that Jim Harbaugh’s team has been lacking all this season?  It sure could be.  Patterson has the skills to be a world-class quarterback in the league but just hasn’t looked altogether comfortable since joining the Wolverines.  His job will be made that much harder this weekend with an offensive line that is playing poorly, both run and pass blocking.  But, if Patterson has a game similar to the one at Penn State, the Wolverines could very easily win this game.

I am willing to bet on Patterson this weekend, something I have been hesitant to do since the start of last season.  But I really liked what I saw last weekend and the Wolverines are in a great spot to bounce back against Notre Dame on Saturday night.
Best Bet: Michigan Wolverines to Win (+103)

Daily Picks, Oct. 23: Trust The Process
NFL Props: Cousins Over 234.5 Yards? WE LIKE THAT!
Get Free Picks & Exclusive Offers