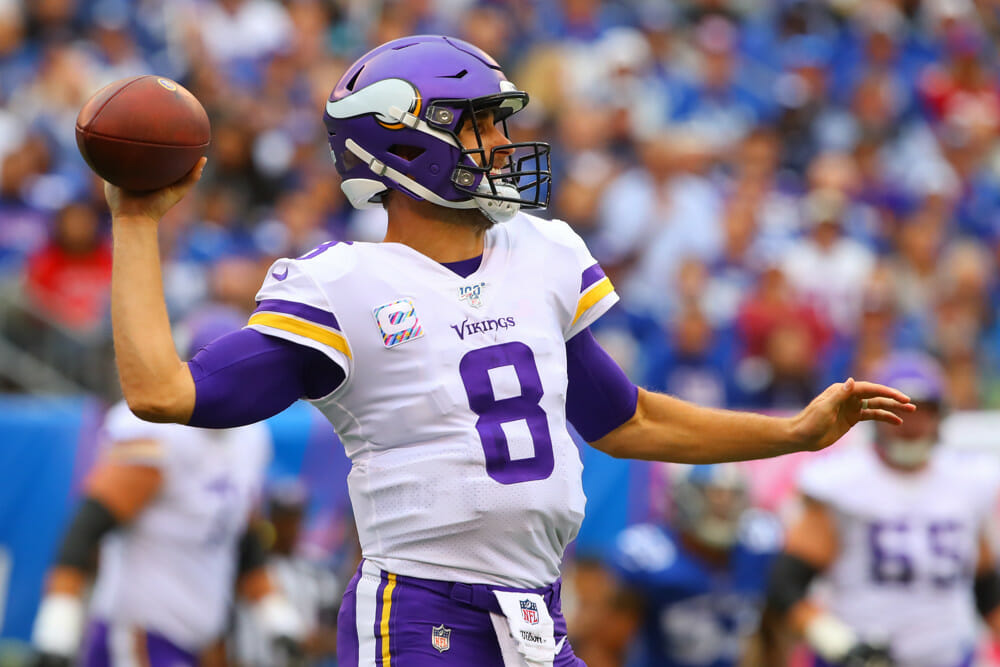 As many teams cross the halfway point of their season we take some time to break down our best prop bets for Week 8 of NFL action.

Washington Redskins vs Minnesota Vikings
Thursday, 8:20 PM ET
It’s no secret that the Vikings and Kirk Cousins have been playing hot in recent weeks.  With the Redskins coming to town there is no reason to doubt this winning trend to continue.  Cousins has thrown for 10 total touchdowns over his last three games and has eclipsed 300 yards passing in each of those contests.  His opponents have been struggling all over the field this season en route to their awful 1-6 record and continue to be a fantastic team to be against on props or sides.

Sure, Adam Thielen being sidelined hurts Cousins’ chances of eclipsing the 300-yard mark again Thursday night, but 234.5 is certainly an attainable goal for the Vikings QB.  Let’s not forget that Stefon Diggs provides plenty of opportunities for big gains and should also be in line for a big game on Thursday Night.

In fact, Diggs is +100 to go over 87.5 yards receiving tonight which is another bet worth checking out.  This line seems a bit low in fact considering he has gone over 140 yards receiving in both of his last two games and surpassed 100 in three of his last four matchups.  With Theilen out, this just means more need for the Vikings to rely on Diggs.  Sure, this gives the Redskins one less receiver to cover.  But even with the occasional double team, Diggs is far better than anyone in that secondary and will get his yards.

Jacoby Brissett OVER 1.5 Passing Touchdowns
Denver Broncos vs Indianapolis Colts
Sunday, 1:00 PM ET
Jacoby Brissett has been an absolute blessing this season for Indianapolis in the wake of Andrew Luck’s shocking retirement at the ripe age of 30.  The Colts’ offense has not only overcome such a loss but has arguably looked even better with Brisset under center.  Last Sunday at Lucas Oil Stadium, Brissett put on a show as he sliced through the defense of AFC South leaders, the Houston Texans.

The Colts took control of the division off that 30-23 win and Brissett was absolutely electric.  He completed 26 of 39 passes for 326 yards and four touchdowns with not an interception to be seen.  These were all career highs for a single game, as well as his passer rating.  He has failed to throw for less than two touchdowns just once this season, in a weird game against the Chiefs where he attempted just 29 passes.  I don’t expect him to come off a career game and throw a clunker against the Broncos.  I understand that the Broncos are an above-average defense, especially in the passing game.  But I don’t think two touchdowns is a lot to ask for real and have high hopes for Brissett to continue making a name for himself in Indy.

Saquon Barkley OVER 75.5 Rushing Yards
New York Giants vs Detroit Lions
Sunday, 1:00 PM ET
Saquon Barkley amassed 80 yards from scrimmage and a rushing touchdown in his return to action week 7 after missing three games due to a high-ankle sprain.  In what should prove to be a great matchup this weekend, the Giants head to Detroit to face off against the Lions.  Detroit has allowed the 28th most rushing yards per game at 139.2 per game and 153.3 per game over their last three weeks.  Those games came against talent which was nowhere near as good as Barkeley and yet they still had no answers on the ground.

Saquon erased any concern I have about his health last week and putting in a full workout on Thursday.  He will return to fill his normal three-down role on the New York Giants against one of the worst run defenses in the league.  In his two full games of action this year he surpassed the century mark in each, with both the Buffalo and Dallas defenses on a higher level than the Lions.  I wouldn’t be surprised to see him do it again this weekend and I think he hits 76 quite easily.