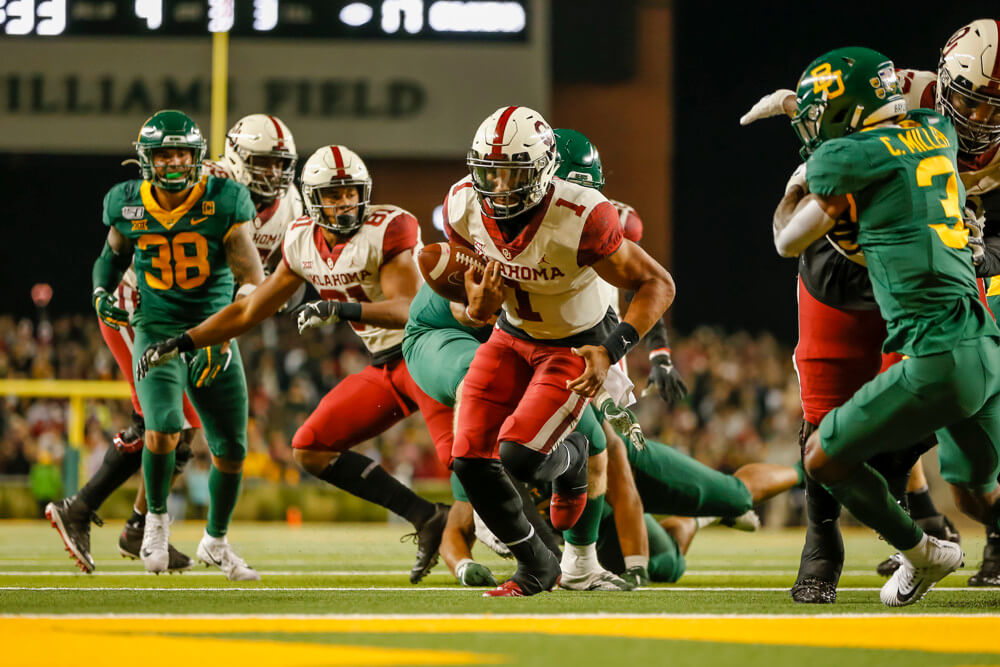 We have finally reached the NCAAF Conference Finals, a make or break moment for a number of teams in the playoff hunt.  Ten conferences will crown champions this weekend and we have a pair of best bets for you to cash in on with the Sooners and Buckeyes taking the field for NCAAF Championship Saturday.

The Sooners and Bears clash for the second time this year and if this game is anything like the last one, we’re in for quite a treat.  Just a few short weeks ago Baylor had a shot to end Oklahoma’s hopes of a berth in this game and a shot at the playoffs, sadly for the Bears – the Sooners put together one of the most impressive comebacks in recent memory.

Baylor came out of the gate red hot, going up 28-3 over Oklahoma early and went into halftime with a seemingly insurmountable 21-point lead.  Oklahoma had other plans however and not only put up 24 points in the second half, but they also shut out Baylor completely over the final two quarters.   This marked the largest comeback win in the history of the program and the biggest blown lead by the Bears.  Oklahoma will not only need a convincing win for a shot at a playoff berth, but they also need Georgia and Utah to lose this weekend.

Baylor will be out for revenge after that game left them outside the bubble of the top-4 teams heading into this week.  The Bears are in the same relative situation, needing a big win and losses from the Bulldogs and Utes.

So, which of these two teams will see their playoff hopes kept alive?

Well, Oklahoma is a near double-digit favorite for a reason and it’s hard to argue with.  For starters, they have one of the most talented quarterbacks in the nation with Jaylen Hurts under center.  The Senior, and former Crimson Tide starter, currently ranks third in the FBS with 380.3 yards of total offense per game and second in the country for rushing yards by a quarterback with 1217.  Fun fact, last week vs. Oklahoma State Hurts became the first player in 67 years to sore a passing, rushing and receiving touchdown in the same game.

Helping to keep defenses off Hurts is RB Kennedy Brooks, who also had a historic week vs Oklahoma State.  Brooks scampered for a season-high 160 yards and has averaged over 130 yards in the four weeks since Trey Sermon went down with a knee injury.

While the Bears offense is no slouch, I just don’t think they have what it takes to keep up with the Sooners twice in one season. I think the Sooners beat the Bears for the second time in 2019 and for the sixth time in a row to win their fifth Big 12 Championship on the trot. I don’t expect such a dramatic ending or the need for a historic comeback this time around, however.  I predict the Sooners make a strong case for a CFP berth and beats Baylor by double digits in Arlington on this NCAAF Championship Saturday.

I believe that Ohio State is easily in the best position of any team featured this weekend. This is due to the fact that myself and many others believe that win or lose, the Buckeyes will find themselves with a spot on the College Football Playoff.  There just aren’t 4 teams better than the Buckeyes in 2019.  Now, this doesn’t mean I believe they will be looking past the Badgers to their CFP matchup, but it does mean that they don’t have the same pressure to win.  It might not matter much really as the Buckeyes are coming off one of their best games of the year with a win over Michigan, and have already smoked the Badgers once this season 38-7.  To be fair, Oklahoma has looked better as the year progressed and rolled over Minnesota 38-17 last weekend with Jack Coan throwing for 280 yards and a pair of touchdowns.  But, I just can’t look past that last game between these two.

October wasn’t that long ago and a 31-point loss is rarely just a fluke, especially with teams of this caliber.  I have seen nothing to suggest that things have changed all that much between the two teams, in fact, one could argue the Buckeyes look even better than they did earlier in the season.  They have beaten 11 of 12 teams this year by at least 24 points with the only exception being the Penn State Nittany Lions who escaped with a mere 11-point loss.

Both teams have defenses that rank in the Top-10 of points allowed with the Badgers ninth with 14.6 PPH and the Buckeyes fourth at 11.2 PPG.  But, I just don’t see Oklahoma being able to keep up on offense this Saturday in the NCAAF championship, even if they manage to put up some big stops on D.  They were already trounced ones by the Buckeyes and it was one of Justin Field’s least impressive games to date.  He looked phenomenal last weekend against another strong Big 10 defense and there is no reason to expect anything different this weekend.  As much as I would love to see this game go down to the wire, I just don’t think anyone in the Big 10 can hang with Ohio State right now, maybe even the nation. With the odds for the NCAAF being as they are, lay the points.