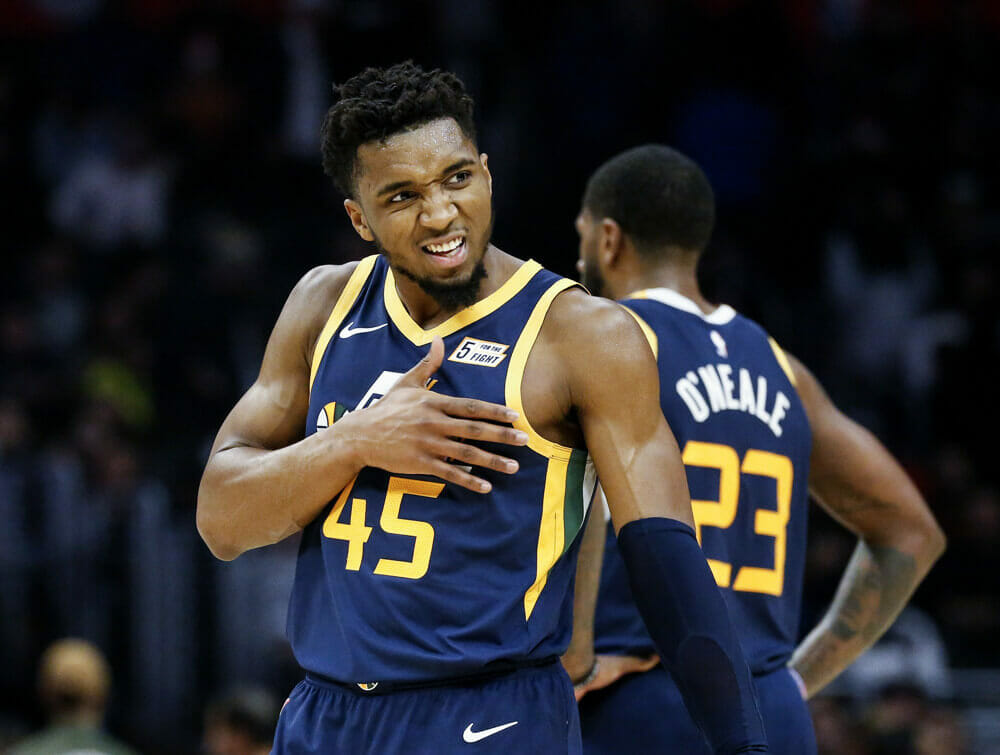 There are seven big games on the NBA slate this evening, featuring some very close spreads and some very good teams.  After the weekend basketball fans had, tonight’s games are going to provide some welcome relief.

Jazz March To A Different Beat

Two of the strongest teams in professional basketball take to the floor to battle it out in Salt Lake City at the Vivint Smart Home Arena.  The Utah Jazz, now leading the NBA with 22 wins and only 5 losses, will welcome in the 18-9 Philadelphia 76ers as 7.5-point home court favorites.

Obviously, Doc Rivers has developed a problem with the depth available off his once-potent bench.  But, the only really significant injury is sixth man Shake Milton who is out with a sprained left ankle.  Oddsmakers have set the Over/Under for the game at 226.5 and the moneylines are currently at Jazz -345 & 76ers +270.  Utah has now pulled out in front of the Lakers by 1.5 games.

Bulls Not Marching At All

The 14-13 Indiana Pacers will be -5.5 home court favorites when the 10-15 Chicago Bulls roll into the Bankers Life Fieldhouse in Indianapolis.  Oddsmakers have the moneylines set at Indiana -210 & Chicago +175. The Over/Under is at 226.

The Bulls are in a tailspin at this point of the season, having lost seven of their last ten games.  Wendell Carter Jr. is still out with a bruised right quad and Otto Porter Jr. is sidelined with back spasms for his sixth game in a row.   For the Pacers, it is Caris LeVert who has been benched for an undisclosed medical condition and T.J. Warren out indefinitely with a left foot stress fracture.

Wall Back In For The Rockets

The 7-17 Washington Wizards are back in action tonight, having boosted their win record all the way up to seven games.  They take on the 11-15 Houston Rockets, who are -1 road dog favorites at the Capitol One Arena in Washington, with an Over/Under is at 227.5.  The moneylines are tight, with Houston -117 & Washington -103.

Former Wizard John Wall will be in the game for Houston to pay his respects to his old teammates. Houston has been on the skids lately, losing 5 games in a row during the prolonged absence of Wall and Christian Wood.

The 13-15 New York Knicks have lost their starting center Mitchell Robinson due to a broken hand. The Knicks will be at home tonight at Madison Square Garden hosting the 11-15 Atlanta Hawks as 1.5 road favorites with the Over/Under at 218.  Oddsmakers show the moneylines to be very tight at New York +102 and Atlanta -121.

Cavs Out To California

The 10-18 Cleveland Cavaliers travel out west to take on the 14-13 Golden State Warriors featuring Stephen Curry.  The Warriors are holding as 9-point home court favorites, and oddsmakers have the money line wagers set at -385 for Golden State and +300 for Cleveland.  The Over/Under is set for the game at 226.5.  Curry has been averaging over 27 points per game, but still must find a way to win without the services of Klay Thompson, who is out for the season.

The 11-5 Miami Heat will visit the Staples Center to take on the hometown  20-8 LA Clippers at 3.5-point road dogs and the Over/Under set for the game at 217.  The moneylines are reading so far as Clippers -159 & the Heat +133.  Miami will have Jimmy Butler back on the floor after he missed 12 games and they will also regain the services of Duncan Robinson for tonight’s action.

What the rest the NBA has been in fear of this season is for the multi-talented Brooklyn Nets to finally realize what they have and start playing like a team.  Now, the Nets are up to 16-12 as they roll into Sacramento to take on the 12-14 Kings at the Golden 1 Center in Sacramento.  They come in as 4-point favorites, with the Over/Under set at a high 242.5.  Oddsmakers have the moneylines set as Brooklyn -177 and Sacramento +145.  The Nets’ Kevin Durant strained a hamstring in the game on Saturday evening against the Clippers and is expected to miss at least two games.