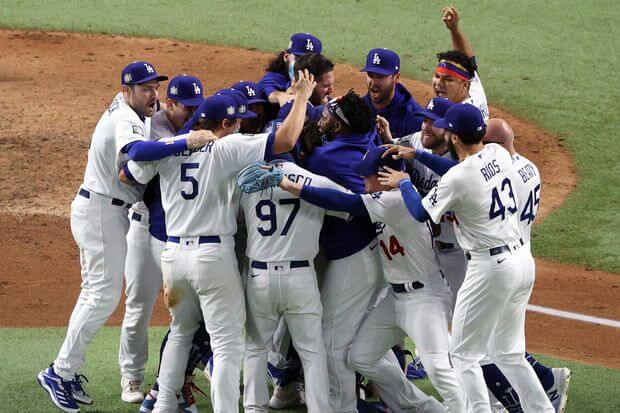 Dodgers Get Top Props From Oddsmakers

Dodgers Get Top Props From Oddsmakers

Not since the short-lived dynasty of the New York Yankees back in the late 1990s have bettors seen the kind of numbers that oddsmakers are putting up for the defending World Champion LA Dodgers.  The initial win totals are up for the new MLB season, and oddsmakers have weighed in on who they think will lead the pack as the games get underway.

It have been a long time coming for Dave Roberts and the long-suffering Dodgers fans waving their banners of Dodger Blue.  But, the victory over the Tampa Bay Rays last season was surely a sweet one and now the storied LA baseball club from Chavez Ravine looks to be set to do it all over again this year.

Oddsmakers are backing the Dodgers so far with their recently published Over/Under win totals for 2021.  They have placed the team at the pole position with a surprisingly high season-win total of 104.5.  That just happens to tie the record set by the New York Yankees back in the 1990s and it hasn’t been topped in the past 32 MLB seasons, according to odds archive SportsOddsHistory.com.

The 104.5 was just posted by Caesars Sportsbook by William Hill this past Thursday.  Only four other MLB teams opened with win totals at 90 or above.  They are the Yankees at 97, the Atlanta Braves and the San Diego Padres at 92 and Tony La Russa’s Chicago White Sox at 90.5

The rest of the Over/Unders for the 2021 season MLB wins are the Minnesota Twins at 89.5, the New York Mets at 89, the Rays and the Oakland Athletics at 88.5, the Houston Astros and the St. Louis Cardinals both at 88 and the Toronto Blue Jays at 86 wins on the season.

Then follow the Milwaukee Brewers and the Washington Nationals at 84.5, the LA Angels at 83, the Philadelphia Phillies and the Cincinnati Reds at 81.5 and the Cleveland Indians at 80 wins on the season.

Teams falling below the predicted 80 win mark on the season start with the Chicago Cubs at 79.5, the Boston Red Sox at 77, the Arizona Diamondbacks at 75.5, the Miami Marlins at 73.5, the San Francisco Giants at 73 and the Kansas City Royals and the Seattle Mariners both at 71.  After that, the Texas Rangers are at 69.5, the Detroit Tigers get 66, the Baltimore Orioles might pick up 64 and the Colorado Rockies are expected to win 62.5.  Bringing up the rear, we find the Pittsburgh Pirates at just 58 wins on the season.

That predicted 58 win total for the season ties the record low set by the 1993 expansion team, the Florida Marlins, now the Miami Marlins.

The 2021 MLB season is just now getting underway with the pitchers and catchers beginning to report for spring training.  The Dodgers are once again the clear-cut, consensus favorites to repeat as World Series Champions for 2021 with most sportsbooks posting odds of around +350 so far.

In Nevada, at the William Hill sportsbook, bettors can still find the Dodgers at even shorter odds of around +200 to win the World Series.  That +200 number also matches the 1999 New York Yankees, who also began the season at +200 to win the World Series that year.  Nick Bogdanovich, the director of trading for William Hill US, recently said in a company press release, “It’s very rare for a baseball team to be that low before the season.”

After posting a .717 winning percentage for the shortened 60-game regular season last year, the Dodgers managed to re-sign most of their star players, including Cody Bellinger, Corey Seager and pitching ace Walker Buehler.  They then topped that off by acquiring pitcher Trevor Bauer, who just happened to be the National League Cy Young Award winner for 2020.  Their .717 winning percentage regular season would translate to 116 wins in a regular 162-game full MLB season, which has only happened twice in the history of the league.