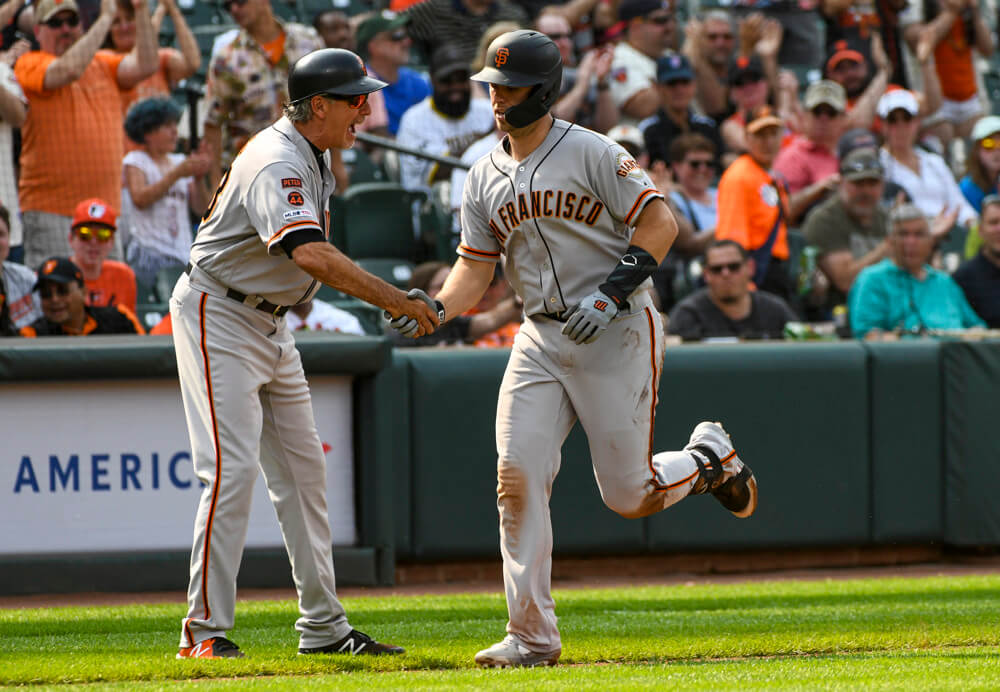 Baseball is back! We think. Each day, SportsIntel’s Matt DeSaro will take a look at two of the 30 teams in Major League Baseball as we head toward MLB Opening Day in late July and we continue today in the NL West with the San Francisco Giants.

The San Francisco Giants are coming into 2020 on the heels of their thirst straight losing season.  A season that saw them finish third in the National League West with an overall record of 77-85.  The optimism this franchise enjoyed following a trio of World Series titles has just about evaporated in recent years and they face a very tough road back to relevance in the MLB.

One of the more glaring issues of this team, and a reason for concern this year, is that the Giants played 54 total one-run games and won 70.37% of them.  This is a very strong indicator that despite their 77 wins, the Giants vastly overperformed.  This makes the San Francisco Giants my pick for the biggest negative regression in the Majors.

Why might you ask does this one metric has me so convinced that this team could be much worse?

Well, let’s look at the other teams who won more than 30 one-run games last year.  Those teams were the Milwaukee Brewers and the Oakland Athletics who were.  Why is this significant? Well, these teams had a .550 and .599 winning percentage respectively.  While the Giants finished at just .475.  This tells us that the Giants were lucky to have won so many of those close games and could have easily finished with one of the worst records in baseball.

So where do they go from here?

Well after three straight seasons under .500 the Giants made a big move by getting rid of Bruce Bochy, their manager of 12 years.  This tells me that the Giants are serious about breaking this team down and committing to a large scare rebuild.  Especially after Farhan Zaidi, the Giants’ new president of baseball operations, the endo facto GM and is a huge fan of analytics.  This might serve San Fran well in the long run, but where does that leave them this year?  Are their priorities on winning now or competing in the long run?

Let’s take a look at where the Giants stand after a busy offseason and whether it will be enough to keep them out of the NL West basement.

What Do The Giants Do Well?

The Giants sadly, don’t do a whole lot well right now.  Perhaps the biggest compliment I could pay them is they really appear to have the groundwork of a rebuild in place.

Much like other needy teams who had a light offseason, the Giants focused a lot on their coaching and front office personnel. Those new analytical minds did not grab any high-value talent but did make some notable additions between free agency and the trade markets.  The kinds of acquisitions that could really pay off if things go well.

The biggest pull for San Francisco was that of shortstop prospect Will Wilson, who the Giants stole away from the Angels in early December. The 21-year-old was drafted 15th last year by the Angels and hit .275 with a .768 OPS in his 46 minor league appearances as a rookie.  He currently ranks as the Giants’ 7th best prospect, which is a real testament to the kind of talent they have coming down the pipeline. For reference, he was considered the Angels’ No. 3 prospect.  He joins a talented group of young ballers including Heliot Ramos, Joey Bart and Marco Luciano.

The Giants also did a good job bringing in veteran talent who might be past their prime but could still have some magic left in the tank.  Billy Hamilton and Pablo Sandoval highlight this group, who are signed to minor league deals and invited to spring training.

The Combination of the young bucks and old heads will make for a great spring training and some interesting position battles.  Hopefully, for the Giants’ sake, some of these unknows will pay off in a big way.

First and foremost, before they get to the MLB opening day, the Giants need to upgrade their pitching both when it comes to their starting rotation and bullpen.  With the losses of both Madison Bumgarner and Will Smith, San Fransisco has essentially lost their two best arms.  It wouldn’t be easy for any team to fill either their No. 1 starter or closer role, let alone both.

The Giants did decent work picking up RHP Kevin Gausman and LHP Drew Smyly, some of the only acquisitions to be guaranteed a contract in 2020.  They join veteran talent Johnny Cueto and Jeff Samardzija as the first four pitchers in this rotation.  Tyler Beede, Logan Webb, Shaun Anderson, Tyler Anderson, Andrew Suarez, and Conner Menez will compete over the next few weeks for that precious fifth starter role.

They won’t be the worst staff in the league but things could be a lot better heading into a rebuild.  Their insistence on signing their new talent to one-year deals means they are making no long term plans with their roster this year.  Not a great sign for things to come in MLB for the Giants as we head into the opening day later this month.

Their bullpen is also a cause for concern after San Francisco pretty much overhauled their entire crew.  This means they will need to bring in a lot of innings to fill those gaps.  The biggest loss here was that of All-Star lefty Will Smith, who signed with the Braves to close games in Atlanta.

They enter camp with precious few options who could contribute this year, including Trevor Godd, Sam Coonrod, Jandel Gustave, and Tyler Rodgers.

But this squad is still a long way off from being trustworthy.  All the more reason for one to expect regression after so many one-run wins last year.

Despite some interesting pieces, this puzzle is still far from complete. As we head into the opening day we think there is a strong chance the Giants end up second worse in the MLB NL with the only thing keeping them from being dead last is how much worse the Marlins are.  But the Giants, Pirates, and Rockies should all be in the mix for the NL’s worst franchise.