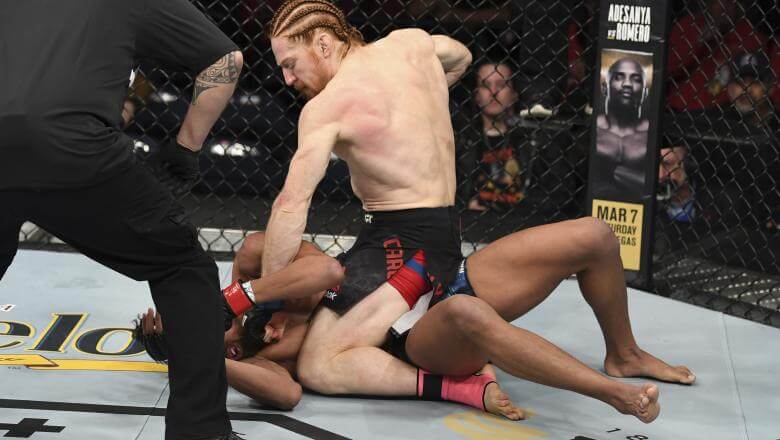 The UFC will continue to hold events this weekend on ESPN 9, and Matt has the best picks, parlays and predictions of UFC Fight Night for your wagering pleasure. Dana White continues to find ways to keep UFC events on our TV screens week to week. This time, the venue will be the UFC Apex facility in Las Vegas.

The odds have been posted for UFC Fight Night, so let’s jump right into our betting picks and parlays for the weekend’s action.

A streak of six straight wins has seen Billy Quarantillo continue to climb the ladder of the featherweight division in recent years. Now ranked 55th, the Ransomville, New York native will face off against Spike Carlyle, the 50th ranked fighter in the weight class. Despite a higher ranking, Carlyle is the underdog here at +135.

Carlyle is a real all-around talent in the Octagon and has shown growth in every one of his MMA bouts. Despite this, and a single career loss, he will close as an underdog in yet another fight. Carlyle’s last match, his UFC debut, saw him win as a +175 underdog against Aalon Cruz, his fifth TKO win in 10 contests. He also has three submission finishes, showing his ability to end fights on his feet or the mat.

On the other side of the Octagon will be Bill Quarantillo, who is also looking to follow up his UFC debut with another win. That win, back in December of 2019 over Jacob Kilburn, came via triangle and was Quarantillo’s fifth submission win in 15 fights. He is now 13-2, has won six in a row.

Quarantine is a BJJ black belt, so its no surprise a number of his more robust wins have come via submission. He is a good matchup for Carlyle, and I expect this to be one of the more exciting fights of the card.

I have to say; this line for UFC Fight Night confuses me. These two fighters have very similar skills, size, and experience in the Octagon. I believe this should be much closer to a pick-em and therefore love Carlyle at +125. He has never lost a fight due to a stoppage, has shown nothing but growth in recent matches, and is the more physically imposing fighter.

Woodley is currently the number one ranked welterweight behind the current champion, Kamara Usma, and a win here would almost guarantee him a shot at the belt. It has been a long wait for fans of T-Wood, who last fought in March of 2019, where he lost his title to Usma.

Woodly has always been praised for his world-class wrestling ability, and even at 38 years old, can end any fighter’s night early. The two-time D1 All-American has spent his career in the spotlight and will have no problem stepping back into the Octagon after such a long absence.

Many have wondered about his ability to get back into shape after the time off. I am not one of those people. MMA fighters with championship-level wrestling backgrounds tend to be some of the most in-shape fighters out there. Growing up as a wrestler teaches you conditioning and discipline on a whole different level, and I have no doubt he is physically ready to go.

Woodley is the top-ranked welterweight for a good reason, and I think it should be a more significant favorite heading into this UFC fight night.

Gilbert Burns is not a pushover by any stretch of the imagination and dispute my faith in Woodley. He has to be careful here. Burns is on a five-fight win streak and has KO’d or submitted each of those five victims. He now has his first shot at a title fight if he can upset the former champ.

A Brazilian native, he was raised training BJJ and is a three-time World Champion in the discipline.

Since moving over to MMA, he has been a force to come up against for any fighter. He is 11-3 in the UFC since 2014, and many of those wins were practical workshops on how to grapple. Burns also has a number of TKOs under his belt as he’s proven a surprisingly good striker in his years in MMA. The wins keep piling up, but I think this is the night where Burns’ win streak comes to an end.

I see very few small areas where Woodley does not hold a significant advantage over Burns.

Woodly will hold the strength advantage in both striking and grappling along with insane takedown defense. Burns is usually considered the more gifted striker in his bouts, but that will not be the case on Saturday.

Woodley’s combination of power and speed will likely keep Burns on his back foot to start the match for UFC Fight Night. He will be hesitant to test Woodley’s ability and range out of the gate. Burns is exceptionally talented and might be a champion someday. But it won’t happen in 2020, and I am fully on board the T-Wood train this weekend.