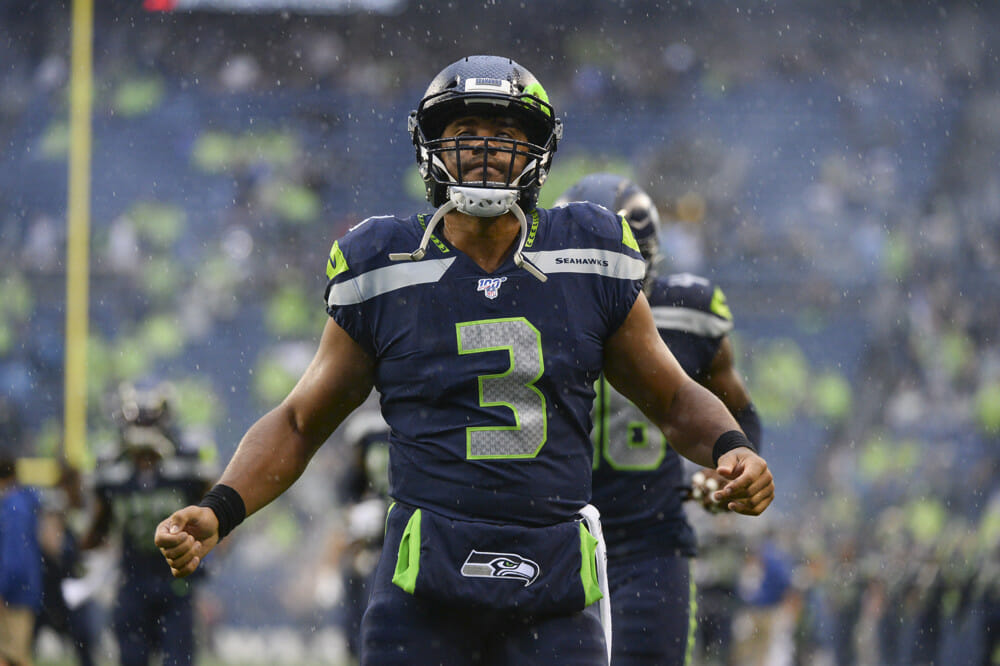 With the 2020 NFL season finally here that means we have to get back to work with our weekly player props. Week 1 was a bit of a struggle with Tom Brady and the Bucs faltering in New Orleans, but we’re right back at it for Week 2.

Week 1 saw the Seahawks and Wilson tear apart the Falcons awful secondary to the tune of 322 yards and four touchdowns.

This week will be a different story for Seattle with New England net on the schedule.

The Patriots have one of the best pass defenses in the NFL and won’t allow Russell Wilson to air it out as much as Atlanta did.

This will require the usually pass-heavy Seahawks to flip the script and try to ground and pound the Pats.

It would be a big shakeup by Pete Carroll after starting RBs Chris Carson and Carlos Hyde combined for a paltry 13 carries to open the year.

Carroll has been quoted multiple times this past week suggesting the need to rely more on the ground game and I love that to start against the Patriots.

Wilson will be well involved in that rushing attack and I think 23 yards is well in his wheelhouse for this matchup.

The Cowboys got their rookie receiver involved in 82% of snaps in week 1, primarily out of the slot.  This is a huge positive for those who took a chance drafting Lamb and could pay dividends this weekend against the Falcons.

As mentioned above, this secondary was torched by Russel Wilson last week who went 31 for 35 on the day.

Enter the Dallas Cowboys who have one of the most talented receiving cores in the NFL right now.

While Lamb is not the star of this team by any stretch of the imagination, he does provide a fair bit of value here.

He caught five of six targets last week for 59 yards against a better defense than this.  It’s a  good sign for his future use and I think it’s fair to take a chance on him take a step up in his second professional game.

The Ravens have long been a team that knows how to get their tight ends involved in the passing game.  This season, Mark Andrews has already reaped the benefits of being a TE on this electric offense.

His opening week, Andrews hauled in five of six passes for 58 yards and a pair of touchdowns in the Ravens’ win over Cleveland.

Andrews saw the most action of any other player on the field and led the NFL in red-zone targets with four.

This week the Texans will become the next victim of this offense and Andrews could once again shine. Houston’s defense was in the bottom five of the league last season in TE yards given up and struggled to defend Travis Kelce in Week 1.

If things stay as they are in Baltimore, Andrews could easily surpass both of these marks again in week 2 and cash a nice Sunday parlay.