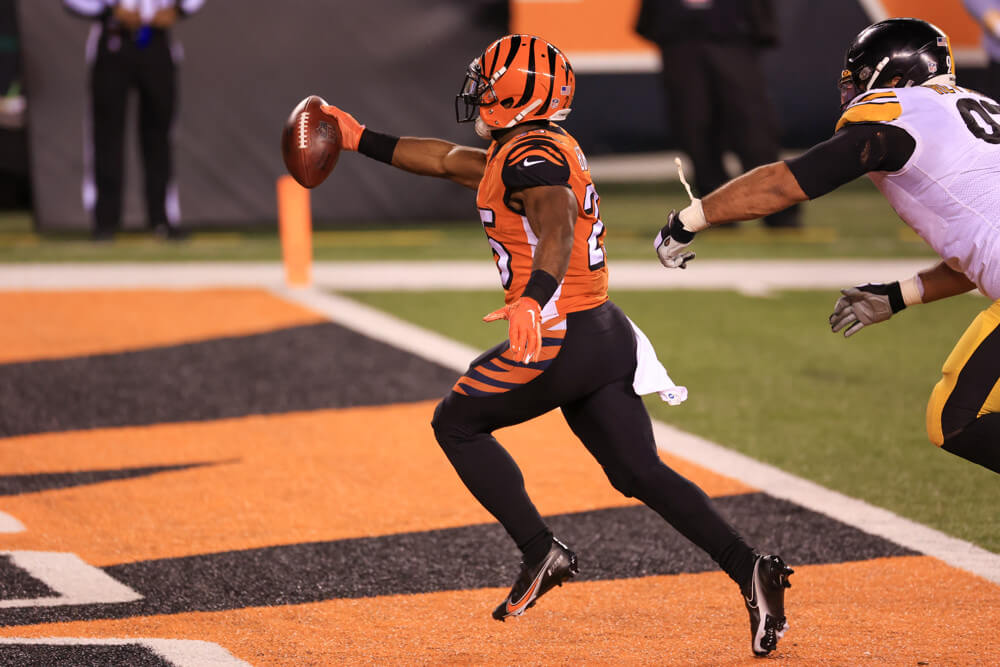 The Only Real Winners For MNF Were Sportsbooks

The Only Real Winners For MNF Were Sportsbooks

Very few would have picked the Cincinnati Bengals to beat the Pittsburgh Steelers, and even fewer would risk their hard earned money betting on Cincinnati, especially with their new number one pick in last years’ draft, quarterback Joe Burrow, was not even on the sidelines.  This NFL game, however, proved to be the biggest surprise of the whole season.

Las Vegas sportsbooks and bookmakers everywhere probably made out like bandits last night. No one anywhere figured that the Steelers, who started out winning 11 in a row, would now be on a 3-game losing streak.

So, the race for the AFC North remains open with two more games to go, although the Steelers were supposed to clinch the division title on Monday Night Football.

There was lots of talk after the game. Mostly “cuda, shuda, wuda” from guys who didn’t know what to say.  Pittsburgh head coach Mike Tomlin put it simply, “Just not good enough.  The performance speaks for itself.  We’re not a good football group right now.”

Monday night marked four games in a row where the mighty Steelers have failed to score 20 points.  To add insult to injury, the Steelers lost fullback Derek Watt to concussion protocol and tight end Eric Ebron who was hurt his back so badly he had to ride off the field on the cart.

Steelers quarterback Ben Roethlisberger passed a couple of milestones in the record books, but in this game he was 20-38 for 170 yards with one touchdown and one interception. He did reach 60,000 career passing yards and 5,000 career completions in the game, so at least it had that going for him.

After the game, Roethlisberger told the press, “The disconnect was probably me just not making it happen. I just wasn’t good enough.”  Then he added, “I’m not consistent enough.”

The here-to-fore unstoppable Steelers offense was held scoreless in the first half, with the halftime score being 17-0.  Pittsburgh actually out-gained the Bengals 2,414-230 yards but then they turned the ball over three times.  Cincinnati held the ball for 32:03 to the Steelers 27:57 but the Bengals did not turn the ball over all night long.

Pittsburg was a 14-point favorite, and the LA Rams were favored by 17 before losing to the previously winless New York Jets on Sunday.  It was the first time since the 1970’s that two teams favored by 14 points or more lost on the same weekend.

Three weeks ago, the Steelers were on track for the top overall seed in the AFC, but now they could well end up as a Wild Card.  Pittsburgh still has to face Phillip Rivers with the (10-4) Indianapolis Colts and the take on Baker Mayfield and the (10-4) Cleveland Browns to finish out the regular season.

That won’t be easy, especially considering that the Bengals were down to their third string quarterback Ryan Finley, who only passed for 89 yards on 7 completed passes and no Cincinnati back had more than 83 yards all night long.  Looking at the stats, it is difficult to understand how the Bengals won the game.

In for the injured Joe Mixon, backup running back Giovani Bernard, who rushed for 83 yards and one touchdown, said after the game, “Obviously it feels good to win, but it amplifies everything because of what’s happened this season.  To be able to beat a team like that.  We know they’re a good team, they know they’re a good team, but when you play those divisional games, the records don’t matter.  It’s about who wants it more.”

Cincinnati moves to 3-10-1 and is off to Houston next Sunday to take on the Texans to see if they can make it two in a row.