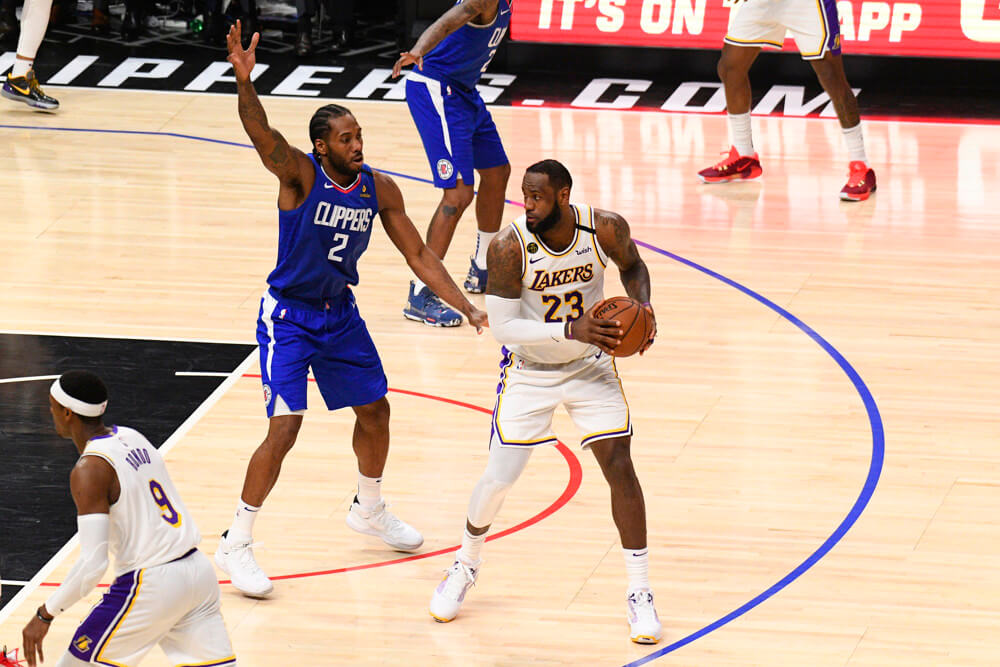 Deja Vu In The NBA As Lakers And Clippers Meet Tonight

Deja Vu In The NBA As Lakers And Clippers Meet Tonight

At times, it seemed as if the NBA would never get done everything they had to do.  It was only 71 days ago when the 2020 NBA Finals finished up, and the league’s teams have had a frantic month with free agency, the NBA Draft, COVID-19 and all those spectacular multi-million dollar contracts.  But, the new season is now officially here as of today.

After the shortest off season in NBA history, we are all set to tip off tonight and get 2021 kick-started just a little early.  Hats off to NBA Commissioner Adam Silver and his staff, who must have put in some pretty long hours to make all this work out.

The season will tip off tonight with only two games, but they should be two good ones.  The NBA Champions LA Lakers with LeBron James and Anthony Davis will take on their crosstown rivals, the LA Clippers led by Paul George, Kawhi Leonard and Patrick Beverly in the early game tonight.  That’s just like how last season started when the Clippers handed the Lakers a surprise loss.

The early game will feature the long-awaited return to the basketball court of superstar Kevin Durant, who is finally game ready to go after spending the last 18 months rehabbing a ruptured Achilles tendon.  That happened in the 2019 NBA Finals while he was playing for the Golden State Warriors, and he’s now in a Brooklyn Nets uniform, ready to charge.

Durant will change partners playing, at last, with Kyrie Irving under new head coach Steve Nash.  Expectations are high in Brooklyn this year.  Tonight, the Nets will take on Durant’s old team where the big news is the return to the court of Stephen Curry after he missed most of last season with a broken hand.

Unfortunately, the Warriors’ other outstanding player, Klay Thompson, will be out for the season once again due to injury.  They will have the services of rookie center James Wiseman, whom the Warriors selected #2 in last year’s NBA Draft and who is a promising prospect to keep an eye on.

The Clippers are still trying to recuperate from their rollercoaster ride through the NBA Finals 70 some days ago.  After racking up a 3-1 game lead over the Denver Nuggets in the Western Conference semifinals, they imploded and were eliminated by Denver, thus avoiding the much-anticipated showdown with the Lakers.

The pandemonium there at the Finals cost Doc Rivers his job and he has been replaced by former assistant Tyronn Lue.  Rivers was then named the new head coach of the Philadelphia 76ers in a matter of hours after his firing.

After winning all four of their pre-season games, some are saying that the Lakers have gotten even better during the offseason.  So, they might be quite a challenge for any other team who wants to take that championship away from them.  Tonight’s game could set the stage for the rest of their season.

The season will start out with no fans, or very few, in the stands, but, with the introduction of the newly released COVID-19 vaccines, now being distributed, there is hope that by the end of the season the NBA arenas will be full once more. Fans, coaches and players are all keeping their fingers crossed that nothing more is going to slow down, or shut down the NBA 2021 season starting tonight.  The new vaccine gives hope to all.