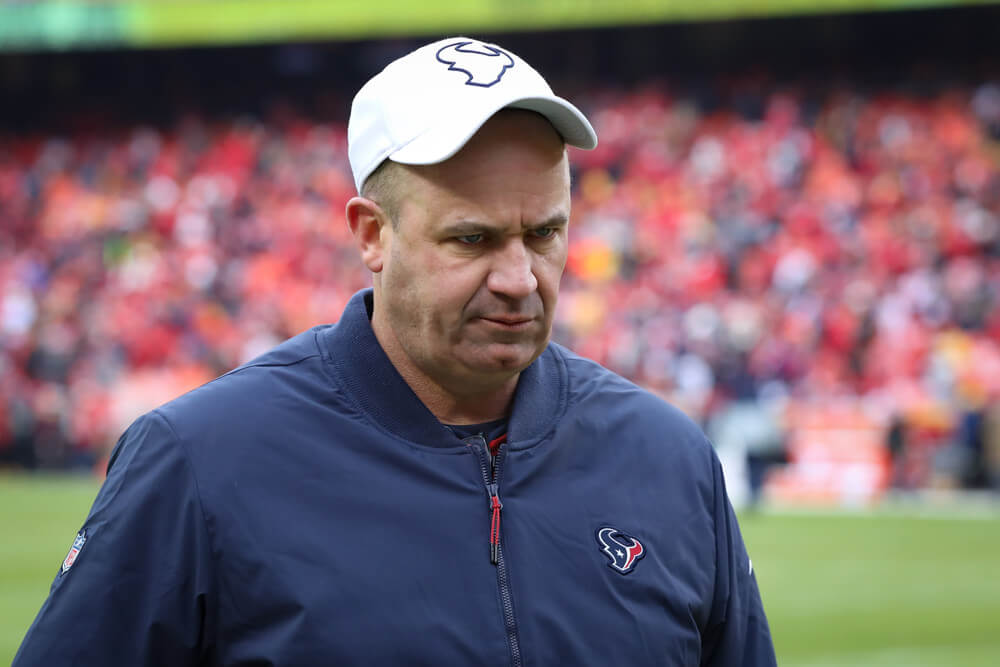 NFL Week 5: A Look Ahead

NFL Week 5: A Look Ahead

Monday Night Football gave fans two games to choose from, and neither resulted in anything other than what was expected.  The Green Bay Packers didn’t have any trouble with the Atlanta Falcons and the Kansas City Chiefs made easy work of the New England Patriots.

Both winners from last night are now 4-0 on the season, and the weeks are quickly passing by.  Heading into Week 5, now that the Tennessee Titans seem have to have their COVID-19 outbreak under control, there are bound to be some lineup changes on teams looking to stay in the hunt for the postseason.

The Texans Need A New Leader

The Houston Texans have gotten off to a bad start this year, putting up nothing but losses across the team’s first four games.  That has already cost head coach Bill O’Brien his job, having been handed his walking papers yesterday.  Coming off three winning seasons, it shouldn’t have been too difficult to keep the momentum going, especially with J.J. Watt and Deshaun Watson on the team, but O’Brien couldn’t find his grove.

The Texans finished first in the South in the past five years under O’Brien, but could never make it further.  Their only losing record was in 2017, when they went 4-12.  Romeo Crennel will now try to pick up the pieces of the current season as interim head coach; however, no one should expect any miracles.  It’s going to take a lot for the Texans to turn their season around.

The Browns Wake Up

The Cleveland Browns have gotten off to a good start this season.  They’re 3-1 and the offense is showing signs of becoming a dominating force in the league.  Against the Dallas Cowboys, quarterback Baker Mayfield only threw for 165 yards; however, the running game has proven to be unstoppable and, as long as Odell Beckham, Jr. keep doing what he’s been doing, the Browns are going to have a very successful season.

The Browns play the Indianapolis Colts this weekend and are ready for the challenge.  Cleveland averaged 7.7 yards on the ground against Dallas, while Indianapolis averages only 2.7 yards.  Expect another ground game out of the Browns.

The Eagles Look For Some Assistance

The Philadelphia Eagles will take on the Pittsburgh Steelers this weekend and are in need of some help.  Starting the season 1-2-1, they take on a 3-0 team that had to miss Week 4 because of the Titans’ COVID-19 issues.  The Steelers will come in well-rested, while the Eagles are possibly going to be down five players due to injury.  Three wide receivers are questionable for the game, which means the Eagles offense is in a bad spot.  It’s possible that the players will be able to make the game, but it shouldn’t be expected.

The Panthers Show Signs Of Life

The Carolina Panthers got off to a rocky start this season, dropping their first two games to the Las Vegas Raiders and the Tampa Bay Buccaneers.  However, in both games, they showed a lot of excellent plays and, with Teddy Bridgewater in at quarterback, the Panthers have a shot of developing strength.  They are now on a winning streak and meet the 0-4 Falcons this weekend.  A third straight win could set them up to produce great things for the rest of the season.

Game Forfeitures On The Table

Because of the COVID-19 outbreak with the Titans, the league has laid down the law.  It expects strict adherence to health policies and no excuses will be accepted.  The coronavirus has already forced schedules to be altered in order to try to maintain order, but NFL Commissioner Roger Goodell wants teams to step up and act more responsibility.

He issued an ultimatum yesterday that affects all teams, asserting, “Protocol violations that result in virus spread requiring adjustments to the schedule or otherwise impacting other teams will result in additional financial and competitive discipline, including the adjustment or loss of draft choices or even the forfeit of a game.  Simply put, compliance is mandatory.  Now is the time to recommit ourselves to our protocols and best practices for the duration of the season.”