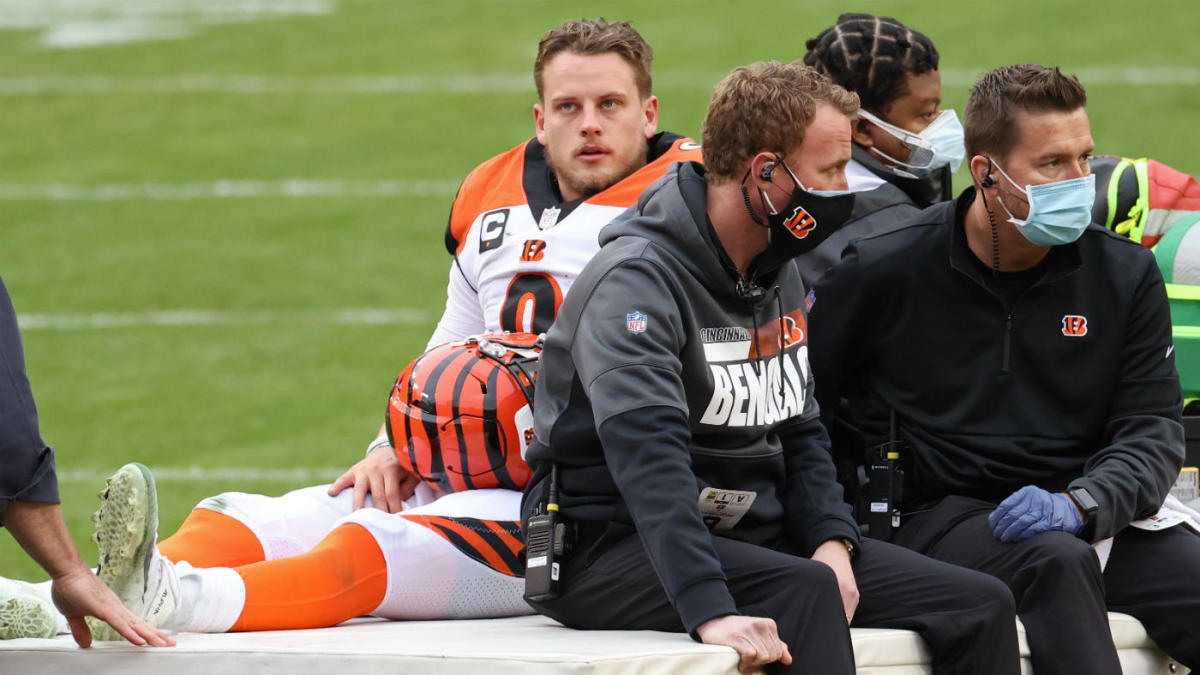 This unusual season for the NFL continues to produce too many injuries to too many players.  As if the on-going COVID-19 pandemic crisis were not enough, players, especially quarterbacks are having too many issues.  Going into Week 12 of the NFL season, here is a roundup of some of the major injuries.  Some injured players will be back on the field again in short order, while others are out for the season.

The most painful injury of the year so far, to endure and to watch, was to Cincinnati Bengals’ number-one draft pick and Heisman Trophy winner quarterback, Joe Burrow.  He had the misfortune of having a large defensive pass rusher land on his leg in an awkward position which caused damage to both his ACL and MCL effectively blowing out the rookie quarterback’s knee and sending him into surgery to try and repair the damage.

Bengals fans were sorry to see that cart come out and carry off their quarterback, as Burrow has already done much to endear himself to the community.  The Bengals are also going through contact tracing protocols as defensive line coach Nick Eason has tested positive for COVID-19.

The Cleveland Browns have announced that star cornerback Denzel Ward will probably miss a few weeks with a calf strain, which means that the team will be without their two top defenders when they meet up with the Jaguars, as Myles Garret is still not ready to play football.  Last week, Ward recorded four defended passes, three tackles and an interception in the rain against the Philadelphia Eagles.  He was having an excellent season before the injury and was leading the league in passes defended with 15.

Cleveland has not been able to utilize cornerback Greedy Williams who played on last year’s national championship team at LSU, but developed a nerve injury in his shoulder that has kept him out of NFL action so far.  The Browns also announced that defensive lineman Joe Jackson has been placed on the reserve/COVID-19 list.

Its bad news for the Arizona Cardinals as starting quarterback Kyler Murray was on the sidelines during practice this week trying to work through an injury.  Meanwhile, Cardinals hero wide receiver DeAndre Hopkins was nowhere to be seen at the practice session, giving rise to speculation that he is less than 100% going into Week 12.

The COVID-19 situation at the Baltimore Ravens facility is so bad that they are conducting all team activities virtually this week while placing running back Mark Ingram, running back J.K. Dobbins and nose tackle Brandon Williams on the reserve/COVID-19 list.  The Ravens did not even practice on Wednesday.

Rookie running back La’Mical Perine of the New York Jets is on the IR with one of those elusive high-ankle sprains.  The Jets have also placed kicker Sam Ficken on injured reserve.

The Saints Plug Away Without Brees

The New Orleans Saints have probably lost Pro Bowl quarterback Drew Brees for the season with several cracked ribs and a punctured lung.  Cornerback Marshon Lattimore is still out of action for Week 12 as is offensive guard Andrus Peat who is still suffering from a concussion.

The LA Chargers are going to reactivate running back Austin Ekeler, who has been out of action with a hamstring injury, however Ekeler will be a game time decision depending on how his pregame work out goes.  On the other side of the country, the New England Patriots have lost running back Rex Burkhead for the season with a knee injury he suffered in last Sunday’s loss to the Houston Texans.

The Atlanta Falcons’ great wide receiver Julio Jones is likely to miss Week 12 with a nagging hamstring injury.  Wrapping things up, in addition to the Carolina Panthers having quarterback Teddy Bridgewater out with a knee injury, running back Christian McCaffrey is not expected to play in Week 12 against the Vikings, as his shoulder has still not mended well enough to play football.