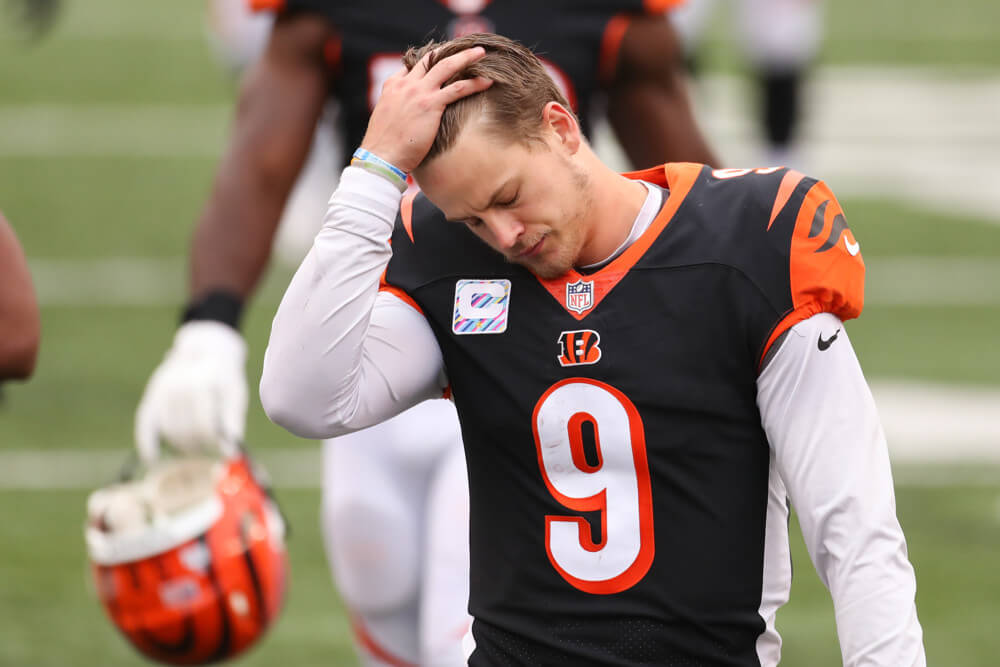 It hasn’t been a good week for quarterbacks in the NFL in general.  Week 11 Sunday is now wrapped up and teams are going to have to dig deeper in Week 12 if they want to stay alive until the postseason.  Yesterday’s lineup of games left some players bruised and battered, and some teams turning out surprising finishes.

The doctors keep finding more and more cracked ribs as they check out New Orleans Saints quarterback Drew Brees, who was injured in Week 10 action.  Brees is already counting the days until he can get back on the field, however, it is quite possible that he may be done for the season, the regular season anyway.  It will be close to impossible to keep him on the sidelines if the Saints get further long in the playoffs.

The bright side for the Saints was Taysom Hill, hand-picked by head coach Sean Payton to someday step in and replace Brees.  He did just that in Week 11 and showed the world that he was right exactly where he belonged, thank you.  Hill completed 18 of 23 passes for 233 yards and rushed for an additional 51 yards scoring two touchdowns on the ground.  He led the Saints in rushing yardage ahead of running backs Latavius Murray and Alvin Kamara rushing for 49 and 45 yards, respectively.  The Saints easily defeated the Atlanta Falcons by a final score of 24-9.

The very last thing that Cincinnati Bengals fans wanted to see on Sunday was their young first year franchise quarterback Joe Burrow being carted off the field with an apparent knee injury, but that is exactly what happened in the 3rd quarter of the game with Washington.  Burrow had already thrown for over 200 yards and one touchdown, but, after he left the game, Washington quarterback Alex Smith took over and the final score was Washington, 20-9.

Tua Tagovailoa couldn’t get the Dolphins offense going against the Denver Broncos, perhaps it was the mile-high altitude, perhaps it was the injury he apparently sustained in Week 10 when he was sacked 6 times.  Miami fell quickly to 10 points down and the coaches pulled Tua from the game and put in veteran Ryan Fitzpatrick, but even that did not help, as the Dolphins went on to lose the contest in Denver by a final score of 20-13.

In the biggest upset of the week, Dallas Cowboys backup quarterback Andy Dalton threw for three touchdowns and 203 yards in the air, while Ezekiel Elliot rushed for 103 yards in defeating Kirk Cousins, who threw for 314 yards and 3 touchdowns in a losing effort for the Minnesota Vikings, who were 7-point favorites at home in their dome.

The Chiefs Stay In The Lead

The Kansas City Chiefs have only lost one game all year long, to the Las Vegas Raiders.  The two teams met again in Week 11 at the new Allegiant Stadium in Paradise, Nevada, and the Chiefs were looking for a bit of revenge for the loss.  Kansas City went into the game as 7.5-point favorites, but the Raiders came to play, as well, and we had one of the best football games of the day.

The score went back and forth with the Raiders leading the Chiefs with only 28 seconds to go when Mahomes let go of a 22-yard pass to Travis Kelce in the end zone to take the lead and win the contest by a final score of 35-31.

The other ‘barn-burner’ featured two of the other great quarterbacks playing in the NFL today when Aaron Rodgers brought his Green Bay Packers team into Lucas Oil Stadium to take on Phillip Rivers and the Indianapolis Colts.  Both teams came out of the contest at 7-3 and the Colts showed as slight favorites at -1.5.  Green Bay kicked a field goal with no time left in regulation to tie the game and send it into overtime, but ultimately it was the Colts who kicked a 3-pointer to win the game in OT, 34-31.

The Pittsburgh Steelers remain as the only undefeated team in the NFL this season as they made easy work of the Jacksonville Jaguars.  The final 27-3 scores shows the domination Pittsburgh had throughout the game, and why the team is in great shape to possibly make a Super Bowl appearance.

The New England Patriots couldn’t keep it together yesterday.  Of all teams they could lose to, they fell to the 2-7 Houston Texans with a final score of 27-20.  It’s the first time the Pats have had a losing record since 2008.

No one really expected the Detroit Lions to beat the Carolina Panthers, but it’s doubtful that anyone anticipated the outcome.  Having to play without QB Teddy Bridgewater and running back Chris McCaffrey, the Panthers ruled the day, blanking the Lions 20-0.  It might be a little too later for the Panthers to consider a deep postseason run, but at least they’re putting together a strong team for next year.