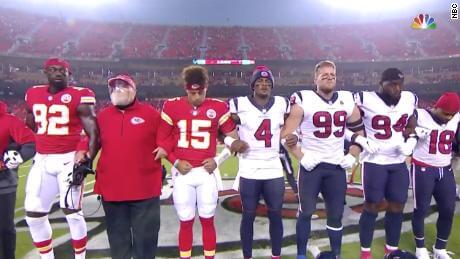 NFL Returns And For A Moment, So Does Normalcy

NFL Returns And For A Moment, So Does Normalcy

The worst pandemic affecting the country in a century and the developing social movement against racism and police brutality among players have been challenging for the NFL and its clubs. This has been a unique year, unlike any other before.

For some time, people thought that the regular season wouldn’t be a reality because offseason drills and preseason games were called off.  Everybody wondered how the NFL, with all the players and coaches who were at risk due to the virus, could be free from COVID-19 and play in stadiums with fans. However, last night’s NFL opener between the Kansas City Chiefs and the Houston Texans put all the concerns to bed.

The Chiefs and Texans Set The Stage

The game was broadcast nationwide, and the country enjoyed its first glimpse of pro football in 2020. Moments before the start of the game at Arrowhead Stadium, the Chiefs and the Texans joined at midfield and locked arms in what was considered a “moment of unity.”

On TV, this seemed to be welcomed with a series of boos among the crowd of nearly 16,000 attendees. However, some fans in the stadium have already denied this occurred and posted on Twitter they didn’t hear any booing.  Others commented that some fans were bellowing “CHIIIIIEFS,” which is a known tradition in Kansas City.

In fact, an important group of players and coaches were asked about this after the game, including Chiefs’ head coach Andy Reid, Patrick Mahomes and Tyrann Mathieu and the Texans’ Bill O’Brien. All of them said that they didn’t notice any booing at that moment. Mahomes explains, “Being down there, I honestly didn’t hear a lot of booing; I’ve seen a little bit of the videos after.”  He added, “We wanted to show unity and show we were going to come together and fight the good fight, and we hope our fans will support us like they do in the game every single day.”

Rookie Edwards-Helaire Was On Fire

Clyde Edwards-Helaire made his debut with the Chiefs and became a historic part of the team. The first-round draft pick out of LSU showed off his amazing quickness and elusiveness, using both to accumulate 138 yards and a touchdown on 25 carries.  From this moment on, the running back will be an obstacle for opposing teams all season long.

Edwards-Helaire was on target only two times, and he didn’t catch any passes on Thursday, which means the Chiefs didn’t entirely expose everything the 5-foot-7, 207-pounds guy can do. This athlete is impossible to cover on angle positions and option routes. He has solid and reliable hands, and it will be very interesting to observe all the ways the Chiefs and Reid will release him during the time of the season.

Mahomes Picks Up Where He Left Off

Mahomes and coach Reid made adjustments on the fly as the Texans began targeting the long throw, and Mahomes saved his arm by concentrating more on short passes. His longest pass was for 19 yards, which is much shorter than what he’s used to, but he accumulated a total of 211 and three touchdown passes. Mahomes ended the night with awesome numbers, becoming the first NFL player to log three touchdown passes with zero interceptions in three consecutive openers.

However, the Chiefs didn’t even concentrate on a passing game to take down the Texans. They ran the ball more than they threw it, with 34 on the ground and 33 in the air.  On average, they threw 37.56 last year and only ran 23.43 times.

The Texans Put Up A Fight

The game wasn’t completely lopsided – the Texans scored first and put up a good fight in the first quarter. However, once Mahomes and Reid changed things up, they were in command and the Texans didn’t stand a chance.  As a result, the Chiefs took their first victory of the season with a 34-20 win, setting the stage for a lot more action to come.