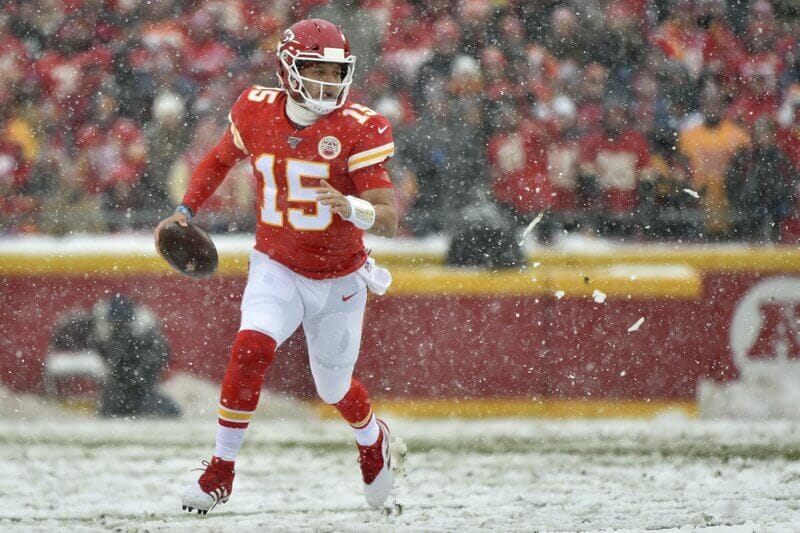 For some football fans, the game takes on another dimension when weather plays a larger part.  But more than that, some might say that, “OK, now we are talking!  Let’s play some real man football.”  This weekend’s Conference Championship Games could be facing some pretty interesting weather.

Four hours before the game starts and the stands are totally white.  No use in sweeping them off again, they’d be white again in 10 minutes.  Beautiful flakey snow.  The whole field is covered in white, the temperature has dropped to single digits.  The wind chill factor is below zero. It’s almost time.

If current predictions hold true, that’s the scene that we will all be watching this Sunday when both the AFC and NFC championships will be on the line and played out in true pro football style in the ice and snow, and perhaps wind and sleet as well; or the sun could come out blazing and the games will be played in beautiful, if cold weather.

Tom Brady has been hanging around Tampa Bay, FL, for long enough that he has lost his cold weather coat.  He brags that he will never go back to the terrible weather in New England.  Brady’s about to head to Green Bay, WI, to play championship football against the Green Bay Packers, led by his old buddy, Aaron Rodgers.

Rodgers is probably out in the back yard in a T-shirt tossing a football around with a buddy. He just got word that it was going to get a colder, “bring it on,” was all he said.

The Packers are the strongest of the four teams left in competition for Super Bowl LIV, which, for better or worse, will be played down in the warm weather. But this NFC Championship game will be played in what the weathermen are predicting to be a 29° temperature at kickoff time.

After all that trouble that Tom Brady and company went through to recruit and sign Antonio Brown, the All Star wide receiver is going to be out with a knee injury, along with center A.Q. Shipley.

Presently, oddsmakers are giving the Packers only the -3 points usually afforded to home field advantage.  However, if the temperature drops much more and the snow starts falling, that number will likely go right on down.  Let’s hope that head coach Bruce Arians is wise enough to bring his warm weather squad up to the frozen tundra in time to acclimate them a bit to a totally different climate.

As luck would have it, the weather gods are going to be spreading it around this weekend.  Arrowhead Stadium, which is also open to the elements, is expecting a 50% chance of snow with an accumulation of one to two inches.

So, if super star young quarterback Patrick Mahomes clears protocols and is allowed to play for the Kansas City Chiefs, and you know he wants to, he may have some rather slippery conditions to contend with.

Josh Allen, on the other hand, has been living in Buffalo where they have a phenomenon called the “lake effect.”  Cold, icy winds coming off the lake that chills to the bone. So, Kansas should be a walk in the park for Josh and the rest of the Bills squad when these two teams meet this weekend.

Unfortunately, Allen will be without the services of running back Zack Moss, who is out with an ankle injury as well as wide receiver Isaiah Hodgins with a shoulder injury.  But it’s the Chiefs who are the team that is really banged up for the championship game.  Mahomes is questionable, but probably will play.  But star rookie running back Clyde Edwards-Helaire is still nursing a bad ankle and wide receiver Sammy Watkins has a calf injury.

The Chiefs O line is down a couple of guys, as Willie Gay Jr is out with an ankle injury and Kelechi Osemele is down with a bad knee.