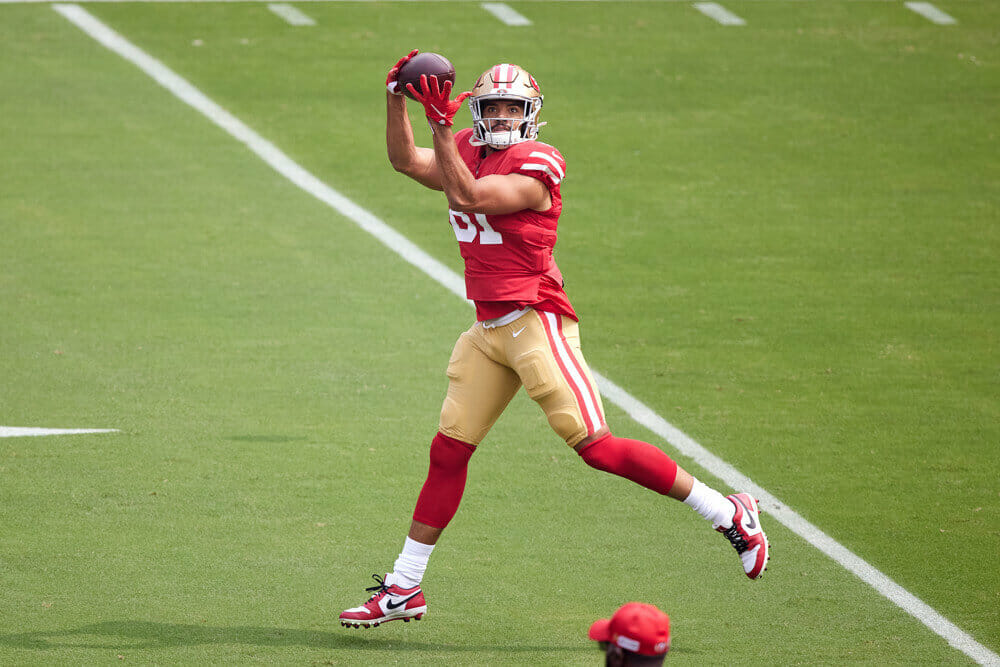 MetLife Stadium has to go.  Maybe not the whole stadium, but at least the artificial turf.  The San Francisco 49ers are limping after they suffered a lot of injuries on the field there a couple of weeks ago against the New York Jets in Week 2, and then lost tight end Jordan Reed a week later on the same turf against the New York Giants.

Despite a review of the turf by the NFL that determined there were no issues, there is apparently something going on and the NFLPA is starting to get more vocal.  J.C. Tretter, the president of the NFLPA and center for the Cleveland Browns, is looking for even bigger changes than just some at MetLife.

MetLife may be home to the Jets, but it didn’t show favoritism last night.  Jets wide receiver Lawrence Cager went down with a hamstring injury as the team lost to the Denver Broncos, and players are once again calling out the turf at the stadium as the culprit.  Raheem Mostert isn’t happy with the situation, and with good reason.  The Niners running back who sprained his MCL a couple of weeks ago, leading him to tweet after the announcement of Cager’s injury, “ANOTHER injury at MetLife.  Shocker.  The turf is horrible!! Shut that field down.”

The NFL, along with the NFLPA, investigated the MetLife turf after the Niners lost five players in one game in Week 2, including star quarterback Jimmy Garoppolo.  That investigation included an inspection by the two entities and the Jets and the Giants, both of which play their home games at MetLife, and no one found any issues.  Of course, neither the Jets nor the Giants had an incentive to step up and complain – maybe losing Cager will make a difference.

Get Rid Of Turf

The NFL likes statistics when it comes to player safety, so it’s a little unusual that it would be willing to ignore this one.  Statistically speaking, artificial turf is not as safe as real grass, an assertion that has been supported by numerous studies.  Turf was brought in because it was cheaper to maintain, but, if it’s costing teams money due to injury – temporary or permanent – those savings aren’t as great as some expect.

Tretter, despite being part of the NFLPA, which had signed off on MetLife’s turf, wants to see changes.  He’s a fan of grass fields, as are the majority of NFL players.  While it isn’t possible to simply wave a magic wand and have things go back to the way they were before, the turf vs. grass debate could make its way into discussions taken up during negotiations for the next collective bargaining agreement.

Field May Become Non-issue Because of COVID-19

Before anyone jumps the gun and starts talking about switching to grass fields, the NFL has to get through this season first.  That has been made more difficult with the sudden and unexpected appearance of COVID-19 on the Tennessee Titans squad, and the league is now juggling things around to try to keep the season from coming to a premature demise.  So far, at least seven Titans players, and six staff members, have tested positive for the virus.

Tennessee was to play the Pittsburgh Steelers this weekend, but the game was suspended because of the outbreak.  The most likely outcome will be moving the game to Week 7, when the Titans have a bye week.  The Steelers are supposed to play the Baltimore Ravens that week, but both teams have a bye the following week, allowing a little flexibility in the schedule.

The NFL Tightens The Screws

In response to the outbreak, and rumors that some teams weren’t taking COVID-19 protocols seriously, the NFL issued an updated policy to league franchises today, explaining that everyone needs to act as though “every person you come in contact with has a COVID infection and take appropriate precautions.”

Going forward, for any teams that might have a potential outbreak, or even think there’s an issue, these will have to provide daily testing for everyone prior to allowing entry into team facilities.  All meetings of any kind will have to be held virtually, personal protective equipment or masks on practice fields and teams are forbidden from gathering outside their facilities – such as at restaurants, bars, etc.  In addition, no player is allowed to leave his respective city during the team’s bye week.

The restrictions may not be pleasant for many, but the alternatives are worse.  If a widespread outbreak were to happen, the NFL could potentially be forced to call off the season completely, and this would not be good for anyone.