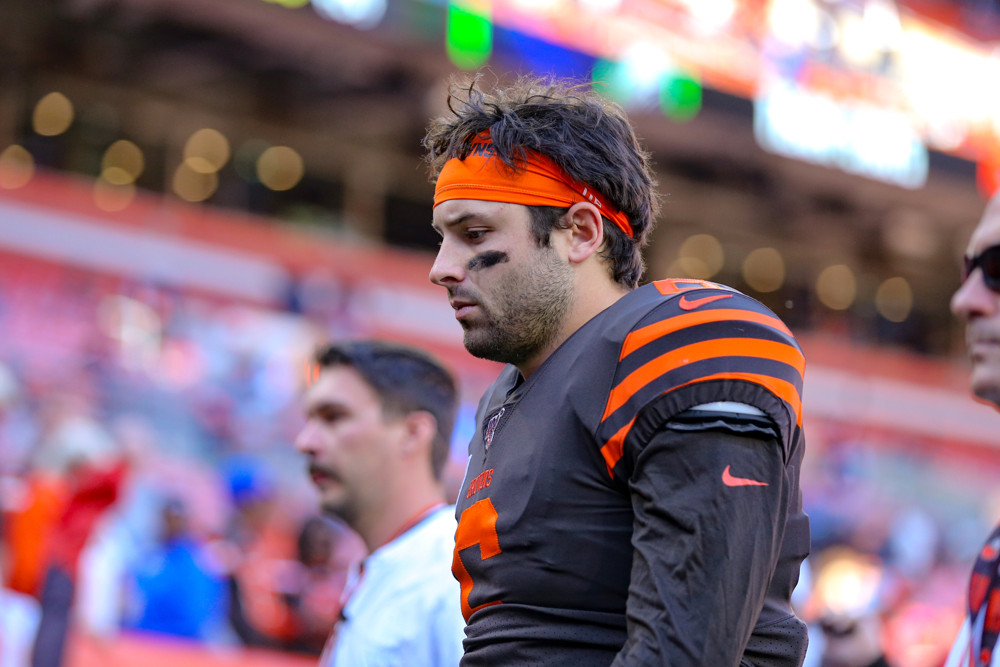 Mayfield Struggles With Media Blitz, Too

Mayfield Struggles With Media Blitz, Too

The Cleveland Browns aren’t having a good season.  Before teams took to the field this year, many expected the Browns to be contenders for the AFC North, but they have now slumped to 2-5.  In certain ways, the damage can be attributed to quarterback Baker Mayfield, who has had trouble getting settled in this year.  He may realize it, as well, based on his reaction to a reporter’s “dumbest” question in a press event Wednesday.

Mayfield was the bullseye for reporters at the media event, receiving more questions than receptions he’s made this season.  One reporter in particular seemed ready to rile up the quarterback, or just didn’t have the common sense to know when to let things go, and hit Mayfield with a barrage of questions.  It soon became apparent that the QB’s temper was beginning to rise and that his blood was close to boiling.

The interrogation centered on the team’s failure against the New England Patriots this past Sunday, the latest in a string of losses for the Browns.  Mayfield received a lobbed question about whether or not the team had lacked urgency on a particular possession close to the end of the first half, to which he responded that an offensive penalty had caused the drive to break down.  Forced to try a longshot throw on third, time expired and the Browns weren’t able to capitalize on the drive.

The reporter, Tony Grossi with ESPN affiliate 850 WKNR radio in Cleveland, kept pushing the subject, trying to put a swing on Mayfield’s responses.  Finally, overtly frustrated, the quarterback responded, “Stop saying ‘but.’ I just told you the clock was running and we had a penalty.  You want to give them the ball back? No. You don’t play, you don’t know it. That’s just plain and simple.”

At this point, Grossi would have been wise to drop the subject.  However, possibly wishing to stay in the limelight, he wasn’t quite done and took one last shot, right at Mayfield’s gut.  He asked the two-time All-American and Heisman winner if he was happy with the way that first-half final drive ended.

The answer would be the same if it had been a Pop Warner quarterback or an NFL pro.  Mayfield looked at him with a certain amount of astonishment and incredulity and said, “Was I happy with the drive? No, we didn’t score points.  [It’s] the dumbest question you could ask. What? Jesus, Tony.”

He’s not exactly wrong.  Not many athletes would say that they are happy with the way any play fell apart and caused the team to miss out on a scoring opportunity.  With that, Mayfield left the gathering, but his frustrations followed him.

He would speak his mind on Twitter only a few minutes later, stating, “Everybody wants to hear the truth until they actually get it…. I am who I am and always have been. Don’t call it emotional when it’s convenient and then passion when it fits. I care about winning, so yeah, I’m frustrated. If I was to act like it’s okay to lose, then y’all would say that I’ve gotten complacent. My sense of urgency is at an all-time [sic] high. And if I offend anybody along the way… that’s too bad.”

Mayfield’s frustration is justified and the question was just the icing on the cake.  He has thrown an interception in every game of the season so far and is in a tie with Jameis Winston of the Tampa Bay Buccaneers for the most this year.

If there’s any solace for Mayfield and the team, it can be found in the Browns’ upcoming game.  They’ll take on the Denver Broncos on Sunday and it’s time for the quarterback to redeem himself.