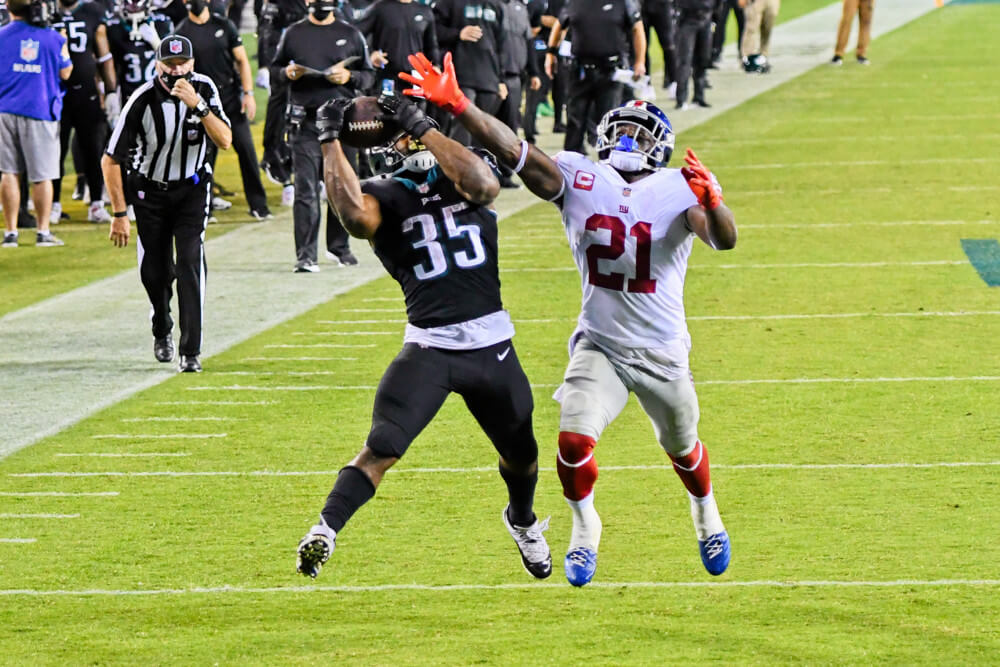 Long-suffering New York Giants fans thought that their team would finally beat the Philadelphia Eagles on Thursday Night Football.  It sure looked like they were going to win the game – until the fourth quarter.

Hats off to Carson Wentz, who proved that he is a legitimate starting quarterback in the NFL by moving the Eagles down the field twice in less than four minutes to ultimately give Philadelphia 22 points to the Giants’ 21.  Foiled again, the Eagles have now defeated the hapless Giants eight times in a row.

For a game between two teams with only one win each on the season, this contest had plenty of action and turned out to be a pretty entertaining football game.  The NFC East is already a write-off as far as making the playoffs, except for one thing.  Somebody has got to win the NFC East, and they will go to the playoffs, even with only two or three wins on the season.

A clue to the eventual outcome of the game came in the first quarter when, with some good blocking, Giants quarterback Daniel Jones ran unimpeded through the line and off toward the end zone virtually alone – no one was even very close.  Jones ran well for about 80 yards, then, about 20 yards from the end zone, he fell down in mid stride.  He simply lost his momentum or stamina and went to the ground on his own before being touched by an Eagles player.

Jones does appear to have tremendous potential; however, he has yet to demonstrate his prowess at quarterback with any degree of consistency so far.  He did show some signs of competency on Thursday evening.  He passed for two touchdowns but only managed to pass for 187 yards all evening while Carson Wentz threw for two touchdowns as well, but he managed to accumulate 359 yards in the air before it was all over.  Both quarterback threw an interception during the game.

The guy that really stepped up on Thursday night for Philly was 5’6” running back Boston Scott, who was in for the injured Miles Sanders.  He rushed for 46 yards on 12 attempts and caught five passes for 46 yards and one touchdown.  Wentz said after the game about Scott’s touchdown catch, “I was a pretty surprised we pulled it off.  When I threw, I thought it was a little high, but he plays bigger than he is.”  Scott caught that crucial TD with just 40 seconds left in the game to give the Eagles their slight advantage, which they wouldn’t give up.

Even with 10 picks through 7 games, Carson Wentz continues to make strides towards being a first-rate quarterback in the NFL, which is no easy task.  He has a tendency to stumble around a bit early in the game, but he has a reputation now as a strong closer, especially in tight games.  Head Coach Doug Pederson said about his quarterback, “It just shows that he is taking that step in the right direction to be one of the top quarterbacks in the league.”

The Eagles are now 2-4-1 on the season and sit atop the NFC East.  That’s not much to brag about, given that all four times in the division have losing records this season – the only division that be on the negative side.  After blowing a 12-point lead, the Giants drop to 1-6 and finding the playoffs just became more difficult.

Sunday Night Football in Week 8 will feature the Eagles taking on the visiting Dallas Cowboys, who are struggling without the services of their starting quarterback Dak Prescott.  Currently Philadelphia is listed as the home favorite at -3.5 and, if Miles Sanders is not ready for action, look for little Boston Scott to be in the backfield.  The New York Giants will be featured on Monday Night Football, when they host Tom Brady and the Tampa Bay Buccaneers as 9.5 point underdogs.