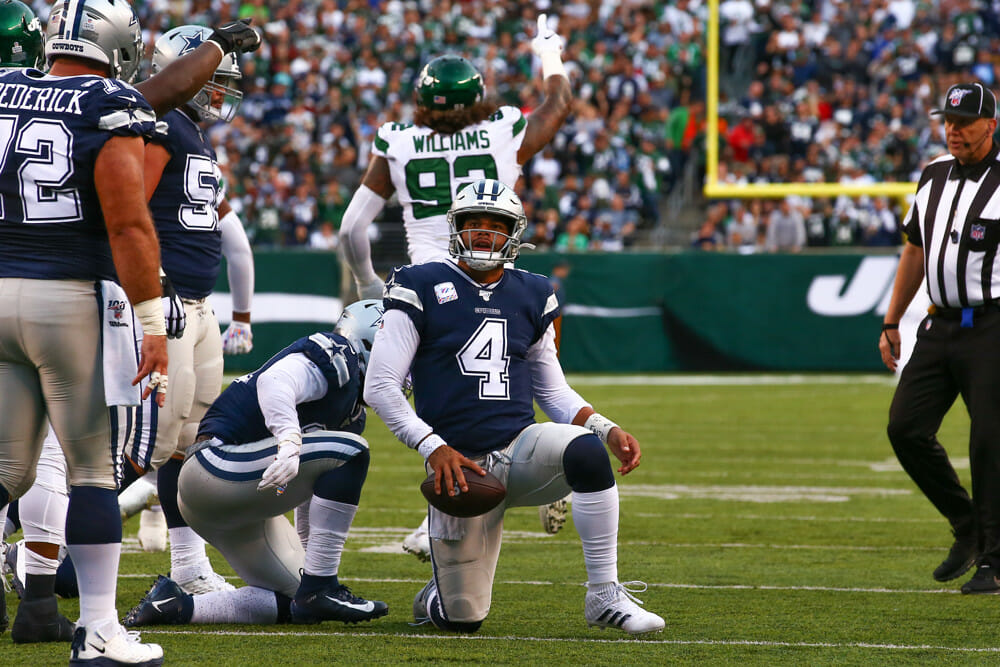 The 2021 NFL season still may be several months away, but there’s never a dull moment in the league.  Trades and deals are always being worked out as teams try to create a winning roster, and there has been a lot of activity this week.  One of the most notable deals centers on the Dallas Cowboys, looking to bounce back from a disastrous showing last season.  Jerry Jones has pulled out the wallet as he hopes his Boys can do better than their most recent 6-10 record.

Dak Prescott was forced to take an early exit from the 2020-21 season due to a scary injury, but he’s going to be back and better than ever.  As with Lee Majors in the Six Million Dollar Man, he’s been put back together and is ready for action, but the price has gone up considerably.  The quarterback just signed a four-year extension worth $160 million, with $126 million of that guaranteed.  It also comes with a no-trade and no tag clause and includes a $66-million signing bonus.

The deal sets several records, with the first being the guarantee.  It’s the largest ever for any deal in the NFL.  The signing bonus and the first-year salary of $75 million are also NFL records.  It’s a major agreement by all standards, with Prescott now under pressure to show he’s worth it as he tries to take the Cowboys at least to the postseason this year.

The Tennessee Titans have decided to let their former first-round choices go.  Offensive tackle Isaiah Wilson will now be wearing a Miami Dolphins uniform this coming season, having been traded for a seventh-round draft pick.  Wilson has to re-prove himself in the NFL after a rookie season that saw him on the field for just three snaps after violating team rules and being arrested for a DUI.  He had wanted out of Tennessee since before the season ended and it’s now time for him to grow up.

The New York Jets have decided that safety Marcus Maye needs to stay with the team.  They have placed a franchise tag on him just ahead of the tag deadline in hopes of seeing the four-year Jets standout help the team overcome their disastrous 2020-21 showing.  The Jets finished with the worst record in the league, only winning two games the entire season.  Negotiations will now take place between the team and Maye, with a final decision needed by July 15.

The San Francisco 49ers are likely to part ways with backup quarterback Nick Mullens.  He has been in the wings for the past three seasons and the Niners aren’t expected to keep him around, choosing to forego his RFA tender.  If this happens, Mullens will become a free agent and could find a new home.  On the other hand, San Fran could still decide to keep him around, but not at the tender price of around $2.1 million.

The Las Vegas Raiders are going to hang onto Dallin Leavitt for another year.  The free safety has yet to be a major force for the team, spending the past three years jumping between the Raiders’ practice squad and active roster.  He only made onto the field in nine games last year in special teams roles, but performed well enough to be able to secure a return to the team.

The Detroit Lions have made a number of changes as they look to recover from an embarrassing 5-11 season.  They have released center Russell Bodine and linebacker Christian Jones, but will keep corner Mike Ford around a little longer.  Ford came onto the squad as an undrafted signee in 2018 and has made 31 appearances and seven starts since then.  He could have been a restricted free agent if the Lions had let him go, but will now stay at home for at least another year.  The terms of the contract haven’t been revealed but, based on the $750,000 he earned last year, it’s likely he’ll pick up a similar amount this year.

The Dolphins are going the tender route with three players.  An ERFA (Exclusive Rights Free Agent) tender has been placed on linebacker Calvin Munson and cornerbacks Nik Needham and Jamal Perry, which will simply allow the Dolphins to fill out their roster without making a major investment.  The ERFA tender doesn’t provide for any guarantees and pays a minimum salary established by the collective bargaining agreement.

Eagles To Build Around Hurts

Jalen Hurts is going to be the new face of the Philadelphia Eagles.  The quarterback is the only one currently signed with the team and Eagles owner Jeffrey Lurie is okay with that.  He has ordered the team to make Hurts’ success its top goal in the coming year as he looks to build a winning strategy around the QB.  That could mean bad news for any backup QB brought in, as it would indicate that taking the field wouldn’t be likely unless something happened to Hurts.

Elsewhere in the league, although there hasn’t been any definitive information, a number of players could be traded or released due to salary cap issues.  Among these are Cincinnati Bengals defensive tackle Geno Atkins, New England Patriots cornerback Stephon Gilmore, New Orleans Saints receiver Emmanuel Sanders and Philadelphia Eagles tight end Zach Ertz, as well as a few others.