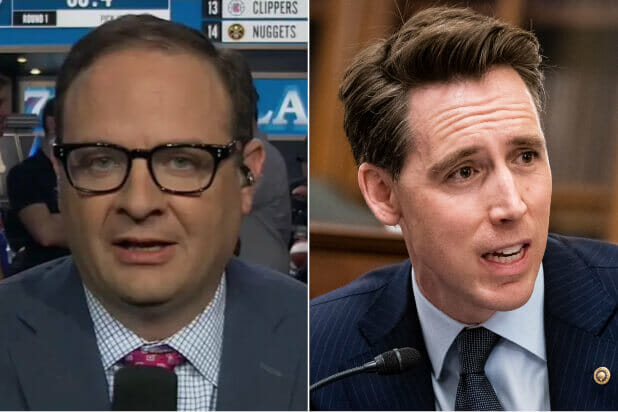 Senator Josh Hawley feels disappointed with the NBA because, according to him, it supports the Chinese Communist Party (CCP).  He feels that this is not good for the nation’s interests.  The US and China still have an ongoing trade war and it won’t stop, even after the end of COVID-19 pandemic. He let his opinion be known through a letter written to NBA Commissioner Adam Silver, and one of the most prolific sports reporters in the US got a copy of it, as well.  ESPN’s Adrian Wojnarowski decided to colorfully respond to the senator, and his response – which consisted of just two words – caused him to be suspended from the sports media giant.

Senator Wants NBA To Break Up With China

Hawley wrote a letter to NBA Commissioner Adam Silver, criticizing the league for allegedly backing the CCP, instead of protecting US social and political interests.  He accuses the league of not using messages on their jerseys like “God bless America” “Support our troops” or “Back the Blue,” ideas that protect the US political ideals.  Hawley also questions why there are not messages that support the victims of the CCP regime like the Uyghurs and the Hong Kong protestors.

The letter by the Senator says, “I encouraged you to reverse course.  Instead, you have spent the intervening months deepening the NBA’s ties to the CCP.  Just last week, you described the October incident as ‘a bump in the road’ in the NBA’s relationship with the Chinese government.  You went on to say that you understand that the CCP has ‘a different view of … how things should be done,’ and that you hope the NBA and the CCP will be able to “find mutual respect for each other.”

The thing is that Hawley is overreacting – he has no big or real arguments for accusing the NBA of having close ties with the CCP.  He is also affecting the sports industry with a political standpoint.   For some NBA fans and supporters, the senator’s request might sound absurd, and they’d be right.

The NBA does not have the political power to stop China doing all the atrocities committed on the past few years.  It is true that the Chinese government has been repressive with the Hong Kong protests, and that it has persecuted the Uyghur population to the point of showing brutality.  However, the NBA is a sports league and there is no way this league can do something to stop how China treats its citizens.

In another part of the letter, Senator Hawley says that the NBA should give players the choice of wearing messages that establish American values like the ones mentioned above.  But the NBA also pointed out players want to put messages that had to do with racial equality, social justice after the killing of George Floyd by a police officer.  It seems that players in general don’t have the intention of using phrases like the ones the senator suggested.

Wojnarowski replied to Hawley via email and His opinion of the senator’s position was made very clear, summed up in two short words – no additional comments necessary.  He simply tweeted, “F**k you!”  Hawley posted the response on Twitter, a juvenile move on the politician’s part, and the walls came crumbling down.

The Woj was suspended without pay, with the ESPN distancing itself from what it called “completely unacceptable behavior.”   Wojnarowski has since tried to make amends, apologizing for his remarks and trying to make amends.  It isn’t clear if the basketball insider will be welcomed back to cover the upcoming NBA games in Orlando.

Anyone linked to basketball personally knows, or at least knows of, Wojnarowski, and there has been no shortage of support for the reporter.  LeBron James and other NBA stars have spoken up, even creating a “#freewoj” hashtag on Twitter in an attempt to get ESPN to back down.  Many assert that that the sports giant has overreacted and want ESPN to leave him alone.  He was simply living by the same mantra that Hawley was pitching – the ability to freely express oneself.

NBA players play a game, they have social and community outreach with people, they do voluntary work, offer financial assistance to low-income families, they’re ambassadors for the US.  Let’s leave the NBA in peace, away from any government dispute, and let’s enjoy the games – especially now when they’re more valuable than ever.