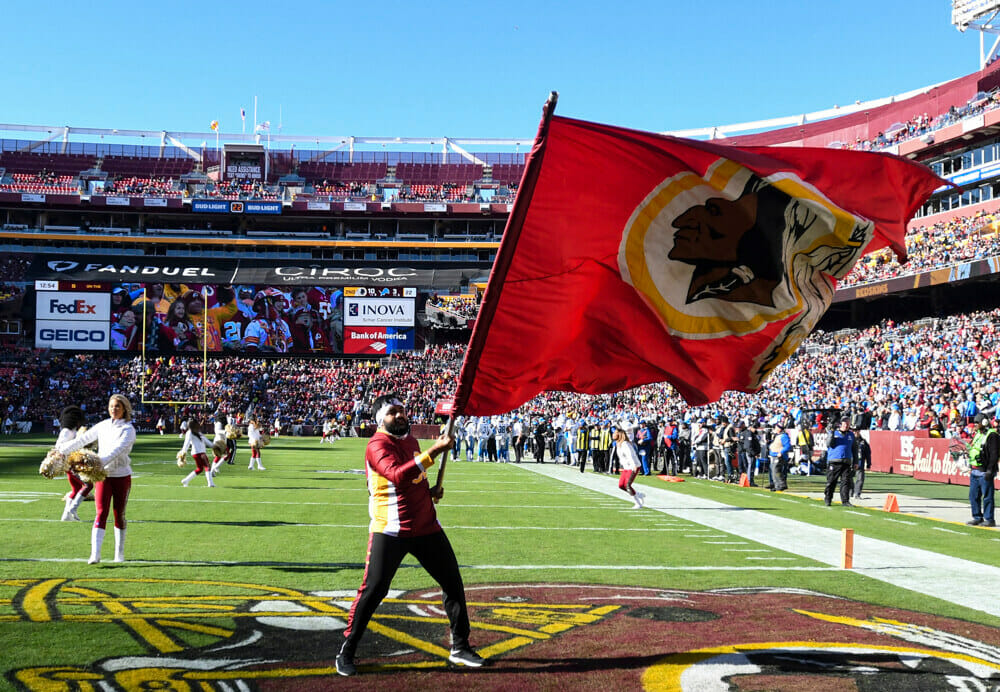 Lately, there has been a controversy about the Washington Redskins needing to have a new name.  Dan Snyder, who is the main owner of the NFL team, has always been adamant about keeping things the way they are, but may be ready to relent and find a more suitable name for the team. Dropping the Redskins for something else isn’t an easy endeavor, and the team has apparently found a way to appease – it hopes – the masses until something more permanent is found (or until the fervor dies down), in the shape of removing Indian imagery.

The Skins are keen to discard any association with the Native Indians at some point, especially since this is where the conflict started, some native Indian leaders and other human rights organizations stated the name “Redskins” violates the integrity of the Indian nation tribes and the term used for the team is offensive to the them.

So, to try to make everyone happy in the meantime, according to a report from ESPN, the NFC East franchise agreed to scrap any relation with native Indians imagery on the Redskins logo, that means having no weapons, headdresses or feathers that symbolize or represent the Indian nation tribes. The Redskins have some new names on mind like: ‘Redtails’ and ‘Warriors’ as a replacement for the current one.  The team will, eventually, change the team’s name but it will keep the burgundy and gold color scheme.

Snyder has been unwilling to have a new name for the team despite the constant criticism by many people.  But he finally accepted that there was no way out of this situation.  A few days ago, he made an announcement that stated, “This process allows the team to take into account not only the proud tradition and history of the franchise but also input from our alumni, the organization, sponsors, the National Football League and the local community it is proud to represent on and off the field.” Now Snyder seems to be more understandable and flexible about this conflict.

The current Redskins logo, with its Indian imagery, was not devised by Snyder; it was actually proposed by Walter Wetzel, who is, coincidentally, a former Blackfeet tribal chairman.  The logo was modelled based on the representation of the Buffalo nickel.

Owner Snyder Receives Call To Give Up Control

On the other hand, despite the removal of the Indian imagery, The Redskins is still at risk of losing three minority shareholders: Fred Smith, Robert Rothman and Dwight Schar.  It seems the conflict has escalated because these guys are trying to convince Snyder to sell his majority portion of stakes to them, according to a report by Thom Loverro of the Washington Times.  This would turn into an aggravation for Snyder; if he accepts or budges to do such a thing, he will no longer be the main owner of the team.  Chances are that these business people mentioned above, and other investors want him out because of all the scandal that has been going on.

However, Snyder will be against this media pressure, and he is not going to budge.  He has been the majority team owner since 1999 and it is not so easy to kick him out.  It is understandable that he behaved in an obstinate way about the team’s name change, but he also has people who support him as the leader of the Redskins.

More Public Fallout Will Force The End Of The Redskins

The media pressure is still there for Snyder.  FedEx is one of the major corporate sponsors of the team and it has openly declared its desire to have a new name for the Redskins.  Other business partners, including Nike along with Bank of America, Walmart and Target, removed all Redskins’ products from their websites as a way to protest against the stubbornness of not having a name change for the NFL team.

It is very unlikely that the Redskins play another game with its current name, according to NBC Sports Washington and numerous outlets.  Definitely, aside from the changing of the Indian imagery, the Redskins team needs a new name if it wants to keep on having a business relation with its corporate partners.