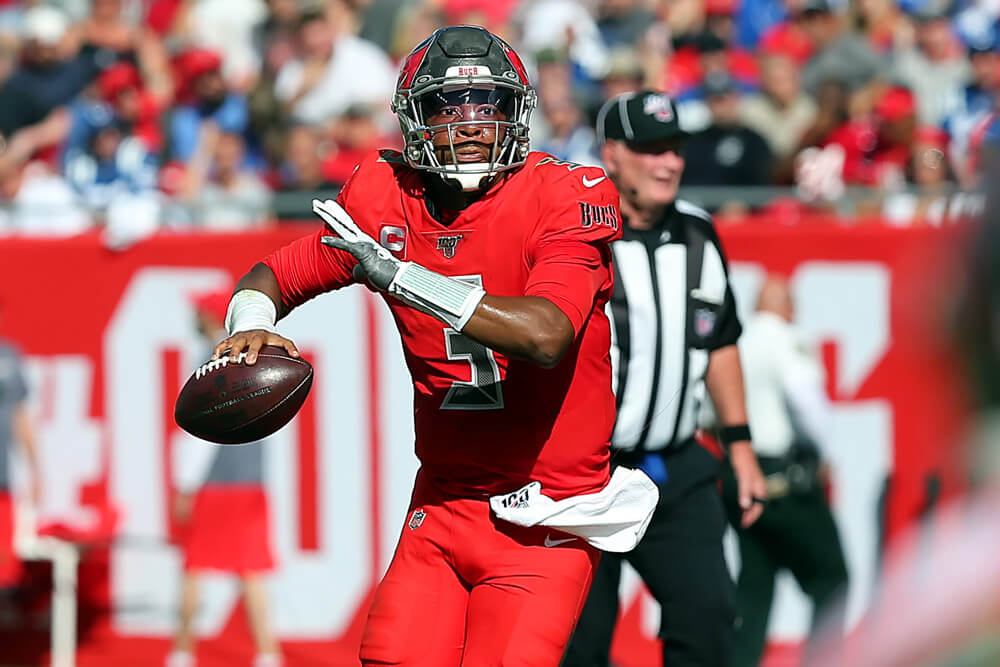 This week spells the end of Thursday Night Football but brings us a trio of games to enjoy Saturday.  Let’s dive right into this week’s best bets for player props in NFL Week 16 and keep our winning ways on track.

Jameis Winston OVER 351 Passing Yards (+168) vs Houston Texans
Another week has gone and another prop bet cashed on our favorite volatile quarterback, Jameis Winston.  In a time when quarterbacks are putting up big numbers weekly, the stat line that Winston generates crosses over into the absurd.  First off, he has thrown for 4,583 total yards on the year which is an average of 326.6 yards per game, both lead the NFL.

He also leads the league in passing attempts which is both good and bad, depending on where your money is.  See, Winston has a bit of an accuracy problem, his 61.7% completion percentage ranks ninth among the 11 players with more than 450 passes on the year.  He also leads the league in interceptions with 24, which is six more than the next closest failure, Phillip Rivers (18).  The good thing about those shortcomings is they have little impact on his total yards on a week to week basis.

Ergo, those are concerns for Tampa Bay fans and anyone betting on the Bucs to win this game.   For us, all that matters is volume, and Winston’s is turned up to 11.  He has totaled 914 passing yards in just the last two weeks and will enjoy another strong day against a questionable Texans defense.  While it’s tempting to max this bet out after his last game went over 450 yards, which would be for him to go over 381 yards at +322 odds, it’s just not worth the risk for me.  I feel great about him going over 350 for the third time in five weeks and cash yet another NFL props bet for us in week 16.

DeAndre Hopkins OVER 92 Yards (-116) vs Tampa Bay Buccaneers
DeAndre Hopkins is another player whose sheer volume of use makes him a great prop bet on a week to week basis.  His 99 receptions on the season rank second in the league behind the bonkers numbers that Michael Thomas (133) is putting up.  He also ranks sixth in the NFL with 81.6 yards per game and is coming off a pair of games where he went over 119 yards receiving.  He has caught at least five passes in his last 18 games in a row and is averaging seven per contest in 2019.

Now, that might be enough to convince some to bet on a third week in a row for Hopkins to go off, but it gets better.  See, the Buccaneers rank 30th in the NFL in passing yards allowed per game but is 1st in stopping the run.  This works out great for us with Bill O’Brien likely to run his usual pass-heavy game plan and will allow Hopkins to have another big day.  Not a single player on the Bucs has what it takes to match up with Hopkins one on one and he should run wild on Saturday.

Considering his likely usage, I also would lean toward adding a total-receptions bet to this as well.  Eight receptions at +114 is where my money would be at.  Hopkins has a strong chance to go over his 2019 average by at least one catch considering the matchup.

DeVante Parker OVER 79 Receiving Yards (-116) vs Cincinnati Bengals
Sticking with the theme this week of betting on consistency, we now turn our attention to wideout DeVante Parker.  He has been a strong bet-on candidate since week 11 when he went for 135 yards against the Buffalo Bills.  In the last five games, Parker has averaged eight targets which he has made the most of, putting up 5.2 receptions per game and 80.6 yards.

This week the Dolphins offense gets a cupcake matchup against a Bengals defense that ranks 27th in stopping the pass. They also like to give up big yardage plays, great for Parker who has 12 catches of 20 yards or more on the season, good for second-best in the league.  Another small motivation for Parker is to reach the 1,000-yard mark for the first time in his five-year career.  He currently needs just 46 yards to hit the mark and should see it happen this Sunday.

So, that’s all for our player props bets for NFL week 16, good luck everyone!

“Made In China” Has Suspicious Ring To It
Vik’s Picks! Home Dogs Rule In NFL Week 16
Get Free Picks & Exclusive Offers