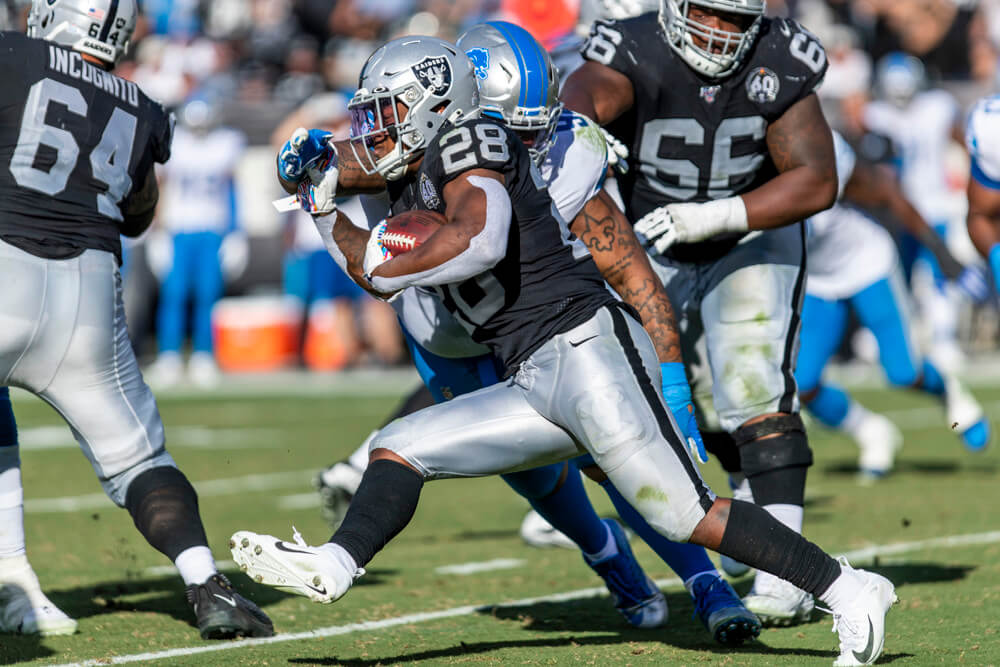 Coming off another successful Sunday with our NFL props betting we look to continue pulling in profits in Week 12.  We’re are laser-focused on at trio of bruising backs with our props here with my faith in the ground game in Week 12.

Jacobs is coming off a 112-yard rushing day his last game out against the Bengals off 22 carries and is averaging a very healthy 4.9 YPC.  The youngster now ranks 4th in the league with 923 rushing yards and Oakland fans might be ready to forgive Gruden for letting Mack go in favor of some fresh legs.

Jacobs is a true workhorse, putting up 21 touches per game, and is looking healthy heading into this game against the Jets.  Sure, the Jets have a very good rushing defense.  They rank first in yards allowed in fact, at just 79.1 YPG.  Thing is, the Jets have played a lot of terrible teams lately, including the Dolphins and Redskins, which has no doubt padded their stats.

Even some of their tougher opponents such as the Patriots are not a run-first team.  So, take that 79.1 YPG with a grain of salt.  Worth noting is the Jets have recently traded away stud defensive end Leonard Williams, further weakening their defensive prowess.

In Jacobs’ last four games, he has averaged 20 carries per matchup and has gone over 70 yards in each of those games.  In fact, Jacobs has failed to go over 70 yards just twice this season, with one of those games being a 68-yard performance against the Texans.

The fact is, this kid is something special and not somebody I would want to be against given the choice, which I am.  So, I’m taking Jacobs to have another week where he flirts with triple-digit rushing yards on 20+ attempts with my first NFL prop bet this week.

This bet has just as much to do with me having faith in Gurley as it does in my lack of belief in Jared Goff. I mean, c’mon, you think the Rams coaching staff is just gonna let Jared Goff air it out on Sunday?

Goff has been one of the most disappointing stories of the NFL this season and his downward spiral seems far from over.  His last game saw just 11 competitions for 173 yards and an interception in Week 11 vs the Bears.  So far in November, Goff has three interceptions and zero touchdowns.

The good news for us is that the Rams will likely hide Goff behind their rushing game in an attempt to minimize his mistakes in NFL week 12, this means another week with a heavy load for Todd Gurley which is why he’s in our props bets.

While his season numbers leave a lot to be desired, last week the Rams really leaned on him with Goff’s struggles and he came through.  I fully expect them to run this same gameplan in Week 12 and look to protect Goff from any further damage, mentally or physically.

Derrick Henry OVER 83.5 rushing yards (-109) vs Jacksonville Jaguars
Derrick Henry is a big game running back who is accustomed to making big plays.  This makes betting his player props a very lucrative venture in my personal history.  Since the beginning of last year, Henry has scored six total touchdowns that have been on plays of 65 yards or more, leading the NFL over that period. In fact, since entering the league, no player with 500+ carries has better yards per carrying after contact average of 2.4.

Now the Jacksonville Jaguars were supposed to have a Top-5 defense this year.  Spoiler alert, they don’t.  In fact, the Jags have allowed a league-worst 175 rushing yards per game since the beginning of October.  They have also given up 11 rushing TDs on the year, which is tied for fifth-worst in the NFL.  Long story short.  The Jaguars defense cannot stop the run right now, not even close.

This makes for a very attractive matchup for Henry, who is coming off a career game, scampering for 188 yards on the ground against the Chiefs.  He has averaged 5.45 yards per carry and looks ready to pick off where he left off against KC.  His workload isn’t in question, averaging 18.7 carries per game, and I expect a Top-5 week from the Titans RB as a home favorite against the Jaguars swiss cheese defense.

That’s it for our picks for NFL props week 12, see you again soon!