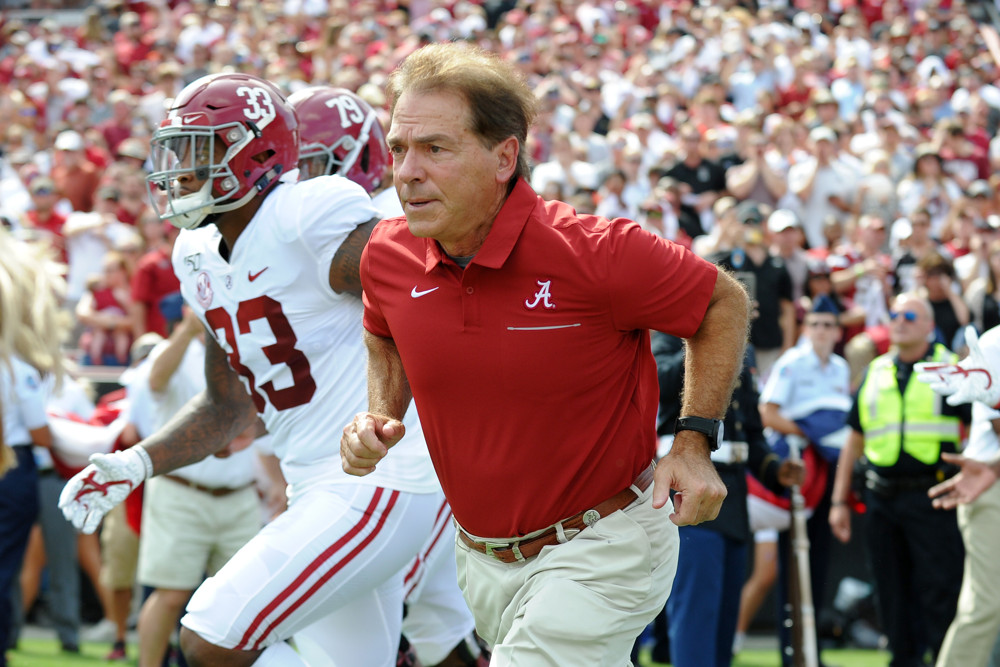 Since it’s the start of the NFL season, there is very little college football to bet on Thursday. Yet, as the preacherman once said: It’s almost Friday. Sunday’s coming. In this case, Saturday is coming. Prepare yourselves. Well, that is unless the bets are on Division II or I-Double A. Rather, as the kids say these days, FCS teams or D-II. For the squares, take Chicago minus the points and let it go. That is an NFL game. Take it as you will.

Because it’s the second week of the college season, the injury reports are limited. Nobody, anywhere, has played enough football to actually be injured. If they are then they’ve already been benched even at a place like Alabama or Clemson. Injuries are not a laughing matter, but they are important to betting. Excuse me while I whip this out.

William and Mary at the University of Virginia. It’s an 8 p.m. ET game Friday. The line is UVa -35.5. No one should touch this game with a 10-foot pole. Another 8 p.m. game on Friday is Wake Forest at Rice University. Wake is -19 currently. Wake has always been a dark horse. That is a comfortable play. Again, as a child of the Southwest Conference, now defunct for about 20 years, Rice is decidedly not what they once were. Wake, however, is a bad moon rising. Wake is the play.

Saturday, pardon the pun, is an altogether different ball game. At Noon, West Virginia is at Missouri. Mizzou is -13.5. Missouri might be the better team according to the oddsmakers but take the number with West Virginia. While Missouri is at home, it’s not all that far to travel. WVa is traditionally the better team.

Another solid game is the University of South Florida at Georgia Tech at 2 p.m. GA Tech is -6.5. Everyone saw the whipping that GA Tech took last weekend. South Florida, much like Wake and Duke, is a slippery slope. Skid one foot on the ice and it’s over. For the money, South Florida plus the number.

At 3:30 p.m., Texas A&M at Clemson. The number is Clemson -17. This is a hard one. In Death Valley, Clemson is difficult to defeat. Yet, Texas A&M was very close to showing up Alabama last season. Texas A&M beat the number. Caveat Emptor.

4 p.m. — New Mexico State at Alabama. The Crimson Tide is -55.5. The rule last season was to take Alabama for the game and bet against them in the fourth quarter. This was a working bet because Nick Saban would put in his second and third string squads in the fourth. It only went the wrong way once. It was safe and easy. If one wins $100 on the game and loses $25 on the fourth quarter, that player is still on top.

Here is a laughable one. At 6 p.m., North Carolina A&T at Duke. There isn’t even a line on this game yet, but Duke will win the day. Take the moneyline until the spread comes out on Saturday afternoon.

Also, the University of Central Florida faces Florida Atlantic University an hour later. UCF has a sharp team, again, akin to Duke, Wake and USF. FAU has Kiffin but he hasn’t had enough time to really develop a team. UCF is a -10.5 favorite, but this game, save a complete upset, is a given. UCF is the play. Their star quarterback was out of action last season but the program there is deep enough to straighten Kiffin and his boys up quick.

Brigham Young University at Tennessee is another tough case. They are at Neyland Stadium but BYU can usually take it to the opposing team. The spread is Tennessee -3.5. Technically, teams travelling west are considered the underdog no matter the number. Be careful with this one but it should be an interesting game. Neyland is loud and angry, much like this writer. Still, tread lightly. The bankroll shouldn’t be blown on this one.

At 7:30 p.m. Arkansas visits Ole Miss. Mississippi is -6.5. Considering that the Razorbacks couldn’t cover the number with Portland State and even though the spread is less than a touchdown, this game could go one way or the other. That means it won’t be close however it turns out. Lastly, 30 minutes later is the University of Miami at the University of North Carolina. Miami is -5 and it seems they will cover the spread, but it’s still a home game for UNC. Miami is the more accomplished team but UNC sometimes surprises, especially at home.

Brandon Dane is a native Arkansan. He is a freelance writer based in Florida. He enjoys Dave Brubeck on a Sunday morning whilst making breakfast for some random woman. He attended Hampden-Sydney College in Virginia and spent four years studying English and Economics.