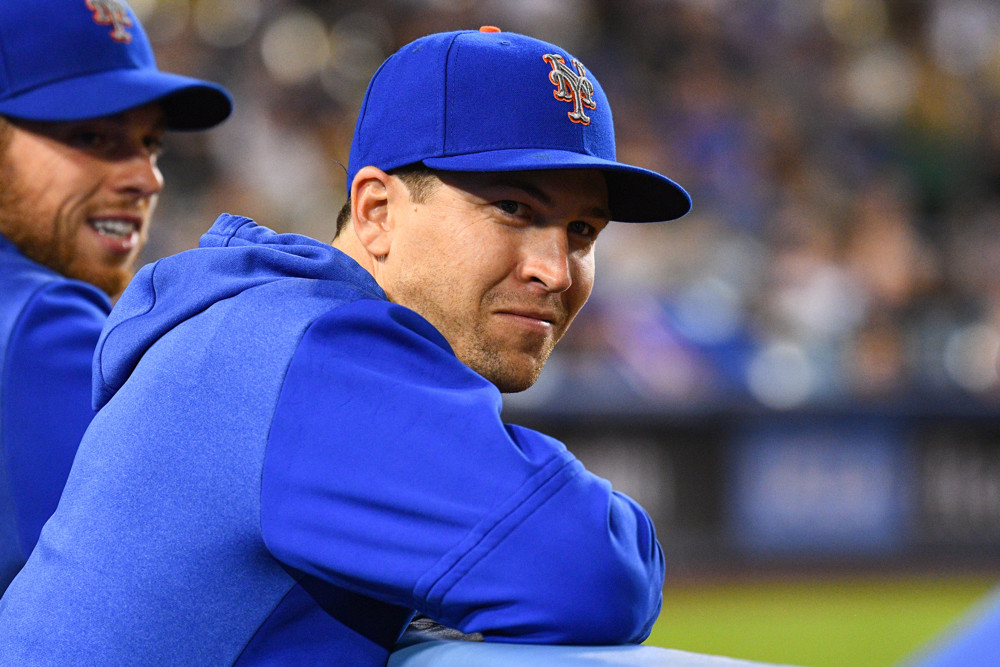 MLB Weekend Preview: Despite DeGrom, Take the Over

MLB Weekend Preview: Despite DeGrom, Take the Over

As is the case with many matchups this deep into the season we have a team that has nothing to play for and a team with everything to lose.  But is the desire and need to win enough to sway our picks for this Saturday night showdown?

The New York Mets are teetering on the edge of making the playoffs and are hoping that deGrom can get them just that little bit closer to a National League Wild-Card berth.  New York is coming off a loss that broke their four-game winning streak on Friday night.  They currently trail the Chicago Cubs, the Philadelphia Phillies who are 2 ½ game out and the Milwaukee Brewers who are 3½ back in the Division. The Mets need to keep winning and hope the team above them drop games along the way. Essentially New York is not in total control of their destiny, but winning will keep them in the hunt.

Upon first glance, no starting pitcher on the Mets roster should give them the best shot to win than deGrom does.  He has inserted himself into the Cy Young conversation after pitching his way to a 2.20 ERA over his past 20 outings, sadly the Mets bats have let him down which explains his 9-8 record.  Over those 20 starts of deGrom’s, the Mets are just 8-12 despite such strong games from Jacob.

Toeing the rubber for the opposing Dodgers is another Cy Young candidate for 2019, Hyun-Jin Ryu.  Ryu is a risky bet however as his struggles of late have been significant for such a high-quality arm.   He has not pitched more than four innings over his last three starts and has not made it to the 7th-Inning since August 11th.

He hasn’t even started since September 4th and the Dodgers we’re planning to skip this start to give him some extra rest but Ryu convinced them it was a matter of mechanics and not fatigue. His last time out he gave up three runs in just 4 ⅓ innings in a Dodgers victory over the Colorado Rockies, he did not factor into the decision.  Ryu is now 0-3 with a gut-wrenching 9.95 ERA since the 17th of August. Somehow Ryu still leads the National League in ERA which goes to show how great he was early on in the season, but deGrom is nipping at his heels.

Jacob deGrom comes into this pitching duel ahead of Ryu in total innings pitched by 21 ⅓ IP, total strikeouts by an impressive 89 punchouts and opponents are batting .215 against him compared to .241 vs Ryu. He will need to be on his game tonight, especially with the Mets coming off a lopsided loss to a Dodger lefty just last night.  Time is running out on their playoff chase but the sportsbooks are favoring the Mets tonight against such a struggling pitcher. It’s worth noting that Ryu has handled the Mets lineup with relative ease over his career with a 4-1 record and 1.38 ERA in seven starts vs The Amazin’s.  The ‘under’ is favored at -115 for this game which should be a tight one, so long as Ryu has those mechanics sorted out.  I have been watching Ryu closely these past few weeks and don’t believe he will be sorted out completely tonight, and will likely be on a pitch count either way.  Based on this, and the Mets bullpen woes, I think we see a game which eclipses 7.5 runs with LA getting to Ryu early and New York’s bullpen coughing up a few in the later innings.

Coming off a horrific outing, Oakland starter Mike Fiers really needs to bounce back if the Athletics have any hope of keeping their current momentum. In yet another story of a team in ‘must-win’ mode, the Athletics are a half-game ahead of Tampa Bay for the top wild-card spot in the American League.  Good news for them is they enter this game with a four-game win streak and having come out on top in six of their last seven matchups. Fiers is coming off the shortest start in his decade long career after surrendering nine runs on as many hits, including five home runs in a single inning of ‘work’.  He was yanked after facing just three batters in the second inning without recording an out and having given up back-to-back home runs to Jose Altuve & Michael Brantley. This was only after giving up longballs to Alex Bregman, Robinson Chirinos & Yordan Alvarez in the first inning.  He had been rolling up until that point, even tying Lefty Grove for the longest unbeaten streak in franchise history at 21 games.  Fiers also rattled off a dozen straight wins during that 21-game stretch.

It seems fatigued might be getting to the 34-year old Fiers as he’s not pitched more than six innings since August 3rd and hasn’t made it out of the 6th inning in his last 4 appearances. This will mark Fiers’ third start of the season against the Rangers having two no-decisions under his belt, coughing up eight runs on 11 hits in 11 total innings.  He has struggled against the Rangers throughout his career posting a 3-3 record with a 6.23 ERA in 11 total appearances and has a rough 8.76 ERA in five games at Globe Life Park.

Countering Fiers tonight will be the southpaw Mike Minor who has put together a surprisingly strong year with a 13-8 record and squeaky-clean 3.08 ERA.  He also has a strong history against the Athletics with a 2-2 record and 3.38 ERA in seven appearances.  He did lose his only start against Oakland so far this season allowing four earned runs on four hits and three walks over six innings, nothing too tragic. Worryingly, Minor has given up four or more runs in each of his last seven games against AL teams batting over .260 with a combined ERA over five.  He has also shown signs of early fatigue with issues dating back to right around the All-Star break.

This breaks down to being a strong bet-on opportunity for the athletics who are 28-13 when playing American League opponents while allowing 4.9 or more runs-per-game on average.  Fiers will mostly likely shake off that last game and fall back into form.  I don’t expect him to go particularly deep into this game, but a quality start is not out of the questions for the veteran.

Betting on this game just about boils down to one thing and one thing only.  That thing is Detroit Tigers starting pitcher Edwin Jackson.  I will, therefore, devote this entire game preview to his and him alone, once I am finished you will understand why I feel he is the only factor work mentioning in this game.

Some of you might not even know that Edwin Jackson is still even in the league, and honestly, I don’t blame you.  I was unaware the 17-year veteran was still dealing for a Major League team until about a month ago when I was scraping the bottom of the waiver wire in my fantasy baseball league.  I mentioned this in the last preview of one of his starts but let me reiterate.  With a 3-9 record and a 9.76 ERA why is he still under contract anywhere at this point? Surely the Tigers, yes even the Tigers, have some AAA talent they want to get a real look at?  They need at least replacement level players and Jackson is nothing close to that.

Jackson is closer to a hip replacement than pitching like a viable replacement player at this point in his career. Let’s consider this statistic, Edwin Jackson has started 12 games and made three relief appearances in 2019 in which he combined to throw 59 total innings.  If we look at just those 12 starts, it makes up for 50 ⅓ innings of work for Jackson.  This works out to an average of 4 ⅓ innings per start from Edwin Jackson, which is over 12 starts!  I can’t think of another pitcher who would still be pitching at this point after such consistent failure. He has given up four or more runs over his last five starts and has gone six innings just once this entire season, which also was his only quality start of the year.  Still not convinced?

Well, what if I told you that Jackson has allowed six runs a staggering eight times this season including a ten-run outing over two innings in Colorado. The more you dig the worse it gets with Jackson’s 2019 campaign.  He currently hast the worst ERA in the league with pitcher throwing a minimum of 50 innings, but that wasn’t enough for Jackson.  Jackson has actually posted the worst season of the century so far since 2000 only Alfredo Simon and Roy Halladay have rivaled such failure over the course of an entire season.

A few more rankings which should terrify any baseball fan.  Edwin Jackson is either in the 3rd percentile or worse in opponent barrel velocity, batting average, slugging and on-base percentage. In fact, Jackson is technically in the 0th percentile which seems impossible and is an integer I never knew existed.

All of this leads to just one conclusion, the Detroit Tigers are tanking and doing nothing to hide it.  The Tigers currently have 43 wins and are the only team to hit 100 losses so far in 2019. They have no reason to try and win at this point, and perhaps are just waving the white flag at this point by trotting Jackson out each week.  At this point, the real game is whether or not Jackson makes it out of the first two innings, which he has failed to do in two of his past 4 starts.

So what does this mean for sports bettors?  Well first off, I feel it goes without saying that you should avoid the Tigers at all costs. I mean how much more information do you even need to know than the Baltimore Orioles are -130 favorites against anyone in the league as they are just a single loss away from the 100 mark themselves.  While opposing pitcher Asher Wojciechowski is no gem with an average ERA of 11.57 in two starts this month, he is still no Edwin Jackson.  All this is to say that we are in for a real pitchers duel, but not quite in the traditional sense.  These guys are still very well matched up together, but it’s for all the wrong reasons.  But this does make for a game which betting the total seems almost obvious, especially with some books offering this game at 10 runs.  Sure both teams suck, and can barely get out of their own way to win games.  But these two pitchers are so incredible sub-par that it’s reasonable to expect this game to go well into double-digits, perhaps even within the first few innings.