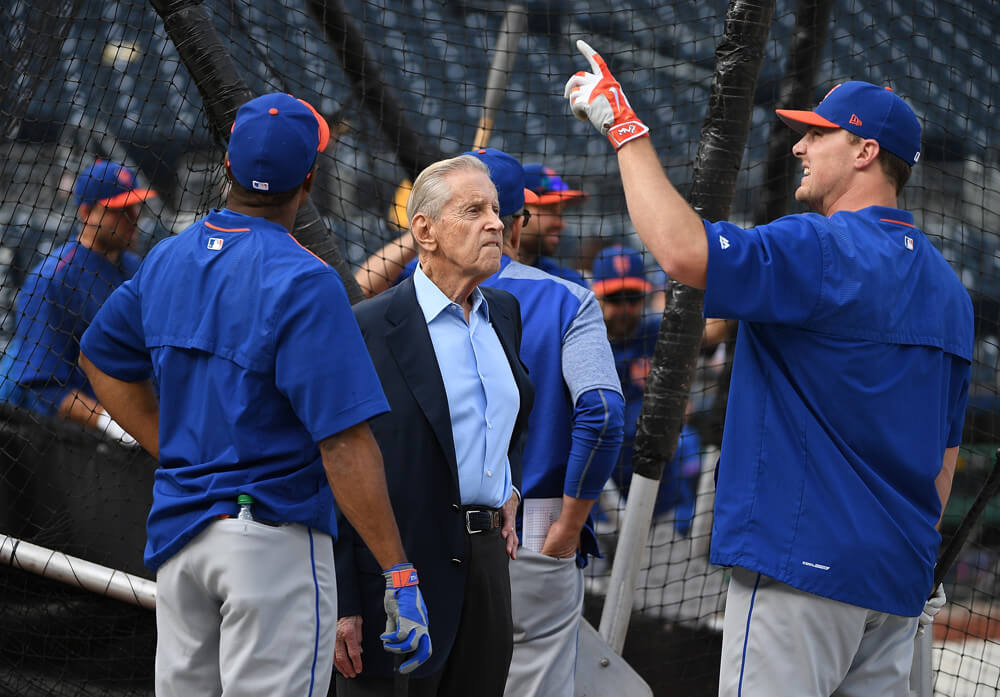 Meet The Mets. Meet The New Owner, Too

Meet The Mets. Meet The New Owner, Too

The New York Mets have a new owner. While the deal isn’t yet cast in stone, it has come far enough for it to be considered a sure thing, unless some major catastrophe strikes in the meantime.  According to MLB chatter, the father and son team of Fred and Jeff Wilpon are willing to give up their majority stake in the company to someone who has had somewhat of a checkered past in financial circles.  They’re in talks to give up as much as 80% of their controlling stake to billionaire Steve Cohen, with the deal ultimately putting a value on the team of $2.6 billion – the largest in the league.

Based on what’s known already, Fred Wilpon, who is the club’s current principal owner, would stay onboard for five years after the purchase is complete, while Cohen would control the team’s activity.  Jeff Wilpon would also stay on for five years, maintaining his position as Mets chief operating officer, even with the new owner in place.  Once the five-year period ends, Cohen will be free to make whatever changes he feels are necessary.

The Wilpons aren’t completely walking away from the team they’ve controlled since 2002.  It isn’t yet known what their stake will be, but they’ll still be backing the club into the future.

Who Is Steve Cohen?

Cohen is already a minority stakeholder in the franchise, and is also a name that invokes mixed emotions on Wall Street.  He knows how to run with the right crowds and apparently has a gift for making money – his current net worth sits at $9.2 billion.  He’s the CEO of Point72 Asset Management, but, in his former life, he was part of SAC Capital Advisors, a hedge fund that ultimately pleaded guilty to securities fraud and insider trading in 2013.

Point72 launched as a hedge fund last year and Cohen has turned it into a money-making machine.  According to records, it has $14.6 billion under management, most of which belongs to Cohen.  He is apparently very savvy when it comes to money management, and the founder and former CEO of the Yankees broadcast network, Leo Hindery, told Bloomberg Television, “Steve Cohen is a brilliant businessperson, he’s a passionate New Yorker, he’s a passionate Mets fan, and he’s wanted to own and control a baseball team for a very long time.  It’s no surprise that he picked the Mets, his hometown team.”

The Mets club perhaps wasn’t his first choice.  He previously wanted to buy the Dodgers, but lost to an investment group that put up $2.15 billion in 2012 to buy the team.

Cohen’s financial prowess is going to be tapped to try to turn the ball club around and put more pennants on its walls.  Since the Walpons took over, the team has only made three playoff appearances, one of which included a run on the World Series in 2015.  However, it was a failed attempt, and the Mets ultimately lost to the Kansas City Royals.

The Mets had a huge payroll this season, spending $160 million to try and secure a winning team.  It didn’t happen and evidence of its inability to spend money where it’s needed most is found in the decision b pitcher Zack Wheeler to leave for the Philadelphia Phillies after signing a five-year deal worth $118 million.

Cohen will have a little easier time to work some deals than what has been seen previously.  MLB just decided to give teams the right to stream games, and this is going to open new revenue channels that could help the Mets have more cash available to bring in serious talent with the new owner.