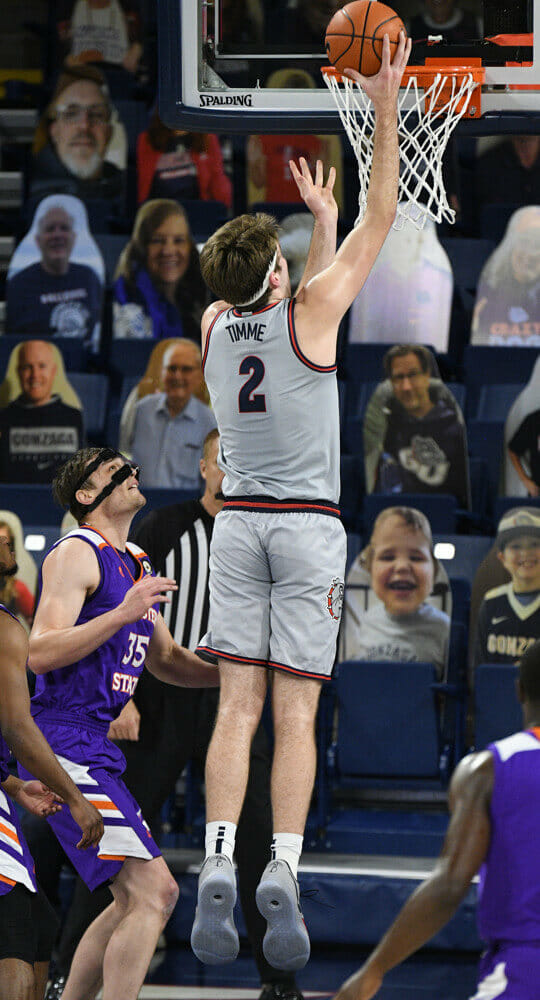 College hoops action is running high, with top-ranked teams getting things off to a great start already.  Everyone remains a little nervous, hoping that COVID-19 won’t create any problems like it did earlier this year, and, for now, teams are taking things one game at a time.  NCAA Men’s Basketball is here to bring 2020 to a close and it’s going to be a very merry season.

The number one-ranked Gonzaga Bulldogs played an extra game with tiny Northwestern State from Ruston, LA, last night.  They had played the Demons the night before, as well, and pretty much dominated them as expected.  But the team from Northwestern were just glad to be there and have the opportunity to go up against number0one team in the nation. They had nothing to lose; no one was expecting very much from them.

During the first half of the game, the Demons only managed to score 17 points and looked half asleep. But something or someone sure woke them up at halftime.  Against all odds, the boys from Northwestern State came out in the second half and scared the hell out of the mighty Bulldogs by hitting on ten 3-point shots and putting up 61 points in the half to come way too close to knocking off the number one team in the country.  Gonzaga held on, though, and won 95-78.

Cougars Have No Trouble With The Owls

The two big guys, Quentin Grimes and Justin Gorham, of the AP Number 6-ranked Houston Cougars had no problem taking down the Temple Owls by a final score of 76-50 in the American Athletic Conference opener for both teams.  The Cougars shot 48% from the floor, including going 10 for 26 on 3-point shots. Quentin Grimes had 22 points, which marked the third game in a row in which he has scored over 20 points.

Reggie Chaney had 13 points and Tramon Mark scored 12 for the undefeated Cougars.  Coach Sampson said, “That has always been our calling card here has been our depth.  We don’t beat you with one or two guys.”

Houston outrebounded Temple 43-26 including a 15-9 advantage on the offensive boards which led to taking a 17-4 edge on second chance points.  The Cougars came out hot for the second half and outscored the Owls 23-8 to start the second half.  They led by 25 points, 55-30, and Gorham had 8 points during that run.

Marcus Sasser, the Cougars’ second-leading scorer, had been out since November 29 with a minor injury and then COVID-19 protocol.  The talented sophomore finished with five points but played 27 minutes.  Caleb Mills, who was picked at the preseason ACC player of the year, was dressed out but never got into the game.  He had missed the previous two games with injury and COVID-19 protocols as well.

Over in Lawrence, KS, the West Virginia Mountaineers came to town with expectations of knocking off the AP number 3-ranked Kansas Jayhawks.  Kansas star shooter Christian Braun expected that the Mountaineers would work to deny his team any open shots out on the perimeter because that was what they did, or used to do.

So, when the Mountaineers came out in a different defense with the intention of denying the Jayhawks lanes to the basket instead of blocking the perimeter, Braun thought that Santa had arrived early, just for him.  The sophomore sharpshooter proceeded to knock down six 3-pointers and score 22 points.  Jalen Wilson stepped up to hit his four 3-pointers and finish with 17 points as the number-3 Jayhawks finished with an easy, 79-65 victory over the number 7-ranked Mountaineers.

Braun said after the game, “To be honest, we didn’t think they’d let us catch.  That’s how they normally guard.  They’re real tough on the perimeter.  We didn’t think we’d get shots up.  But they came out with a different game plan and we let them fly.”