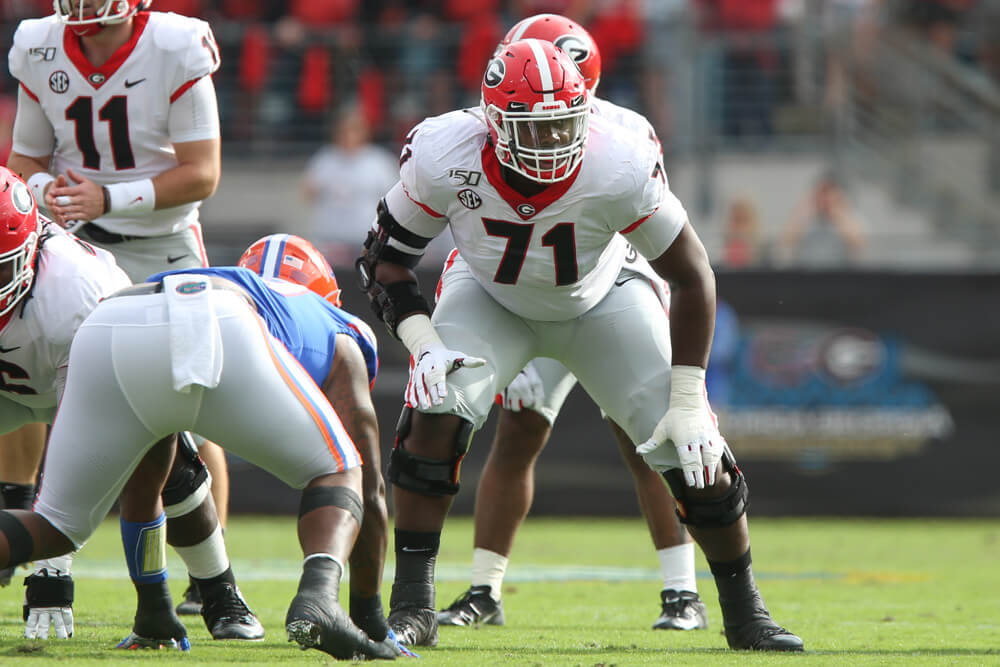 Quarterbacks on football teams may often receive the most attention and are considered the stars of the show, but let’s be realistic.  Without a strong offensive line, they wouldn’t be able to pull off half the feats they do.  Keeping the pocket secure, containing the outside blitzes and generally ensuring that the quarterback has time to complete his play is only possible with a strong front five, and the upcoming NFL Draft has several players that are head-and-shoulders – literally – above the rest.

While the coronavirus still makes it unclear whether or not there will even be an NFL season this year, teams are still ready to get their squads in line for September.

On The Building Of Impenetrable Walls

Georgia’s Andrew Thomas has been a bulldog in every sense of the word.  At 6’5”, 315 pounds, the offensive tackle is a wall that isn’t afraid to go up against anyone.  He also has agility for his size, allowing him to be a great run blocker, opening up lanes and clearing the path for the backs.  Not bad for a guy who started out as a drummer in his high school band.

Thomas isn’t the only Bulldog ready for primetime football.  Isaiah Wilson has shared the offensive spotlight with him for the past couple of years and, at 6’6” and 350 pounds, he has the size that makes him an ideal candidate for a team looking for assistance up front.  Wilson is only 21 years old, which means there is still some work to be done to mold him into an NFL lineman, but this means that he can be picked up at a more favorable price.

The List Of O-Line Talent Doesn’t Seem To End

The University of Alabama has already shown that it has some incredible offensive talent.  Two stand-out running backs are going to appear in the draft next week, and their jobs were made easier thanks to tackle Jedrick Wills, Jr.  He may not have shown the best skills at pass protection, but his 6’4”, 312-pound frame gives him a lot of ability as a run blocker, just like Thomas.  However, Wills doesn’t just block defenders – he makes sure they know what hit them and isn’t happy until he puts someone in the dirt.

Tristan Wirfs spent most of his time at Iowa at right tackle, but also showed his coaches that he can switch to the left side of the line, as well.  This will give the 6’5”, 320-pound powerhouse a lot of flexibility in the NFL and is sure to impress a couple of coaches.  The fact that he comes from a school that has seen 17 offensive linemen previously enter the NFL, all after having served under head coach Kirk Ferentz, will be a bonus.

Power Comes In All Shapes And Sizes

One of the bigger standouts to appear next week is going to be Mekhi Becton out of Louisville.  He lacks a certain finesse in his play and isn’t always the most coordinated on the line; however, he has two strengths that will get him in the game without too much difficulty once those shortcomings are addressed.

Becton stands 6’5” and weighs a massive 364 pounds.  With that type of body, he doesn’t need to do much else other than just stand there and let defensive players bounce off him.

Charlie Heck is going to make a heck of a difference for the team that can pick him up.  The son of Andy Heck, the offensive line coach for the Kansas City Chiefs, it wouldn’t be an exaggeration to say that the 6’8”, 311-pounder has been groomed for this moment his entire life.  He hasn’t always gotten the credit he deserves, but his 33 starts at North Carolina show that he has skills.  There’s obviously a certain amount of pressure, being the son of an NFL coach that just won the Super Bowl, but Heck will polish his game and be a strong addition to the league.