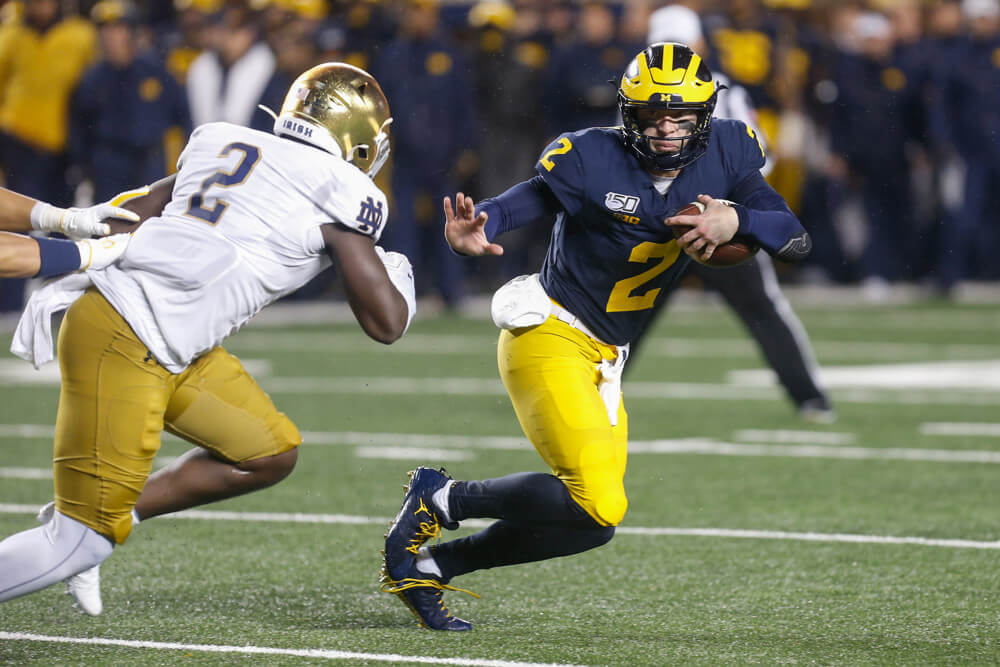 Week 10 of the college football season is fast approaching and we have a pair of locked in best bets for your wagering pleasure.

Michigan has been a very hard team to get a feel for so far in 2019.  One week they look undeserving of a ranking at all, then the next week they run roughshod over Notre Dame.  The Wolverines come into Maryland off an absolutely crushing victory over the Irish, 45-14.  It was a weird performance from Shea Patterson, who threw for just 100 yards and two touchdowns, while Zach Charbonnet ran in another two on the ground.  This was a much-needed win after a heartbreaking loss to Penn State in Week 8.

On the flip-side, Maryland has been a team on a downtrend after suffering five losses in their last six games and posting a 2-4 record against the spread along the way.  The Terps hit a new low last weekend after getting destroyed by Minnesota 52-10 on the road.  Maryland was forced to use three different QBs after Tyrrell Pigrome left the game with a leg injury.  The trio managed just a combined 131 yards in the air with a TD and an INT.  This is very concerning as these are not numbers that will see success against a ranked team such as Michigan.  The injuries extend to their offensive line as well, as they could be without Johnny Jordan and Marcus Minor, making the quarterback situation even that much more of a problem.

Michigan opened as 17-point favorites but was quickly bet all the way up to 22 points while the total opened at 56 and remains there at this time.  The Wolverines lead the all-time series 7-1, taking the last four in a row and covering each spread along the way, including a 42-21 win last season as a 17-point favorite. Both of the previous games played at College Park were UM wins and fell under the total.  With rain expected this weekend and the Terps’ lousy offense, I think another under is in order for this rivalry.

Oregon puts their seven-game winning streak on the line Saturday night in Los Angeles with a primetime showdown against USC.  If you had asked a few weeks ago, I would have said that Oregon was a lock to make quick work of USC with a very tough defense and an offense which was picking up steam heading into the second half of the year.

Things have since taken a real turn however with the Ducks giving up 31 points to Washington and 35 points to Washington State with a combined 695 passing yards allowed.  Those are not numbers that a Top-10 team can afford to post for a long stretch.  This is a big problem for Ducks as the Trojans have the second-best air game in the Pac-12, trailing just the Cougars.  Their rookie QB Kedon Slovis has been a strong acquisition so far, completing 72.3% of his passing attempts.

USC is one of the final roadblocks for the Ducks in their pursuit of a championship season.  The Ducks are back in the conversation to earn one of the four top spots in the playoffs and will finish conference play with a home match against Arizona State before their annual game against Oregon State.

Their senior QB Justin Herbert has a real shot at being the number one pick in the NFL Draft next year after throwing just a single interception in his 307 attempts this year.  He is playing behind one of the best offensive lines in the Pac-12, led by Shan Lemieux and Penei Sewell.  They also bring a strong run game to the table behind CJ Verdell, who had 313 all-purpose yards in last week’s win vs Washington State.  Add to that their top-10 defense and it’s easy to see why they are favored by four points in this game.

Despite their recent struggles, I still love Oregon in this game as I believe the Ducks are beyond the reasonable level of competition that USC can hang with.  I’m taking the Ducks to fly high Saturday night and avenge their heartbreaking loss to USC three seasons ago.
Best Bet: Oregon Ducks -3.5 (-110)