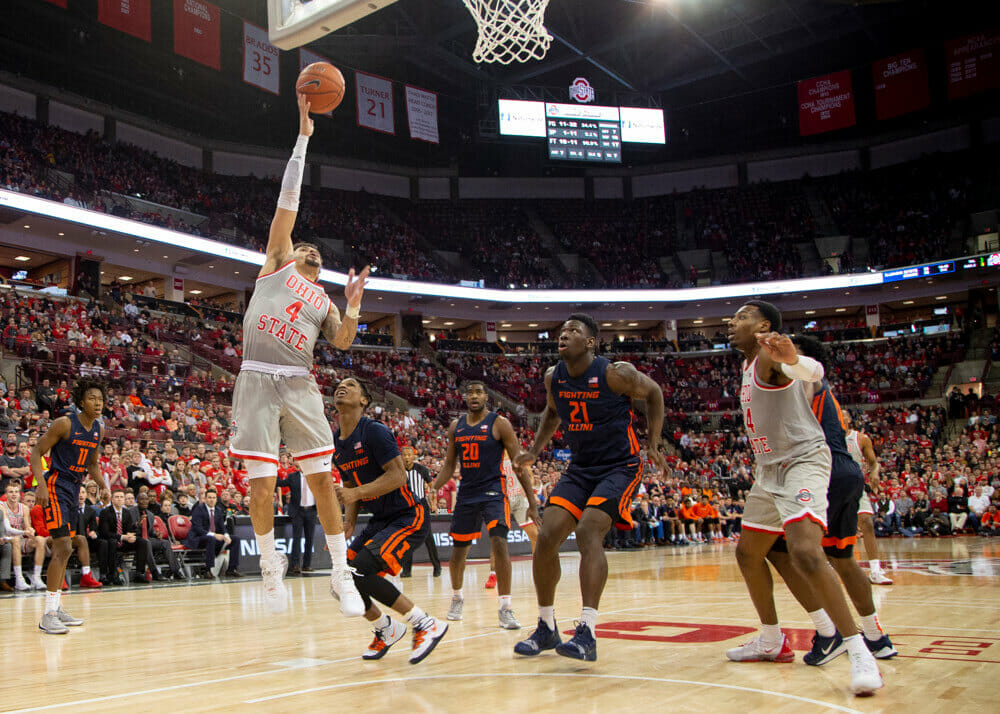 March Madness is now literally right around the corner, so it time for the NCAAB teams to make their final bids.  The tournament field will be announced this coming Sunday and the final push is on.  Fortunately, it doesn’t appear that the coronavirus will have too much of an impact on March Madness games, which means fans will be able to experience the tournament and all its usual excitement.

The Ohio State Buckeyes aren’t at the top of the charts, but they deserve to be watched.  The team will pick up some additional momentum at the Big Ten Tournament and shouldn’t have too much difficulty against Purdue.  After that, the Buckeyes will be in a great spot to have a top-ranked seed on Sunday.

The Wisconsin Badgers continue to impress, showing incredible talent on both sides of the ball.  Once on the verge of being eliminated from contention, they have come back to win eight straight games ahead of the Big Ten Tournament, as well as a conference title.  They’ll play the winner of the Michigan-Rutgers contest in Game 7 of the tournament and are ready for a deeper run.

The Duke Blue Devils have turned up the heat, recording back-to-back wins against the NC State Wolfpack and the Carolina Tar Heels.  Being a young team has its advantages, and Duke is beginning to show that it has the stamina to keep running strong.  There’s little doubt that the team will be seen well into March Madness.

With a 24-7 regular season finish, thanks to a win against the Michigan Wolverines, the Maryland Terrapins have set themselves up for a strong run in March Madness.  They’re already set deep into the Big 10 tournament will be watching intently to see who Penn State takes on in Game 6.  That game will see either Nebraska or Indiana compete against Penn State, and the Terps are probably pulling for Nebraska.

The Oregon Ducks weren’t supposed to get this far, but they have and are on course for a national championship.  Four straight wins to wrap up the final season show that the team has a lot of talent, even if it sometimes has difficulty on defense, and head coach Dana Altman’s previous experience in the Big Dance is going to come in handy this time around.

Finding a little late-season difficulty, the Kentucky Wildcats are still a strong force in basketball.  The team’s home loss against Tennessee last week hurt its ego a little, but a come-back win against Florida helped to restore the team’s pride.  Still, it will almost certainly be given a lower seed this coming Sunday because of its occasional slipups and because its defense isn’t always on the ball.  Making it to the Sweet 16 shouldn’t be an issue; getting past that point will be more difficult.

The San Diego State Aztecs have done almost everything right this season.  Big wins over Brigham Young, Creighton and Iowa have propelled the team toward the top of the carts and will find a good spot in the March Madness seeding.  Whether or not the Aztecs can hang in there, however, is questionable and the team might be looking at an early departure.  Still, they deserve to be applauded for getting this far.

The University of Baylor has a pattern that extends across virtually all of its sports programs.  They start strong, keep the momentum going and then lose energy before the end of the season.  The Bears were on a winning streak that had them sitting at the top of the charts, but then lost three of their last five regular season games to suddenly fall behind.  However, the team is still champion-level and could get a top seed this Sunday.  They first have to get past their Big 12 Tournament game this Friday and, providing they do well, they could be seen in the final March Madness competition.

The Florida State Seminoles ended the regular season as ACC champions and are undoubtedly true contenders for a final four appearance.  The Noles struggled to get where they are, but have phenomenal talent ready to shine on postseason action.  As long as Devin Vassell and Patrick Williams stay healthy, the team will be difficult to beat.

16 straight victories show why the Kansas Jayhawks are the strongest team to beat in March Madness.  Offensively and defensively, the team is putting everyone else to shame and is at the top of the list because it completely deserves to be there.  The Jayhawks can now relax a little and formulate a new strategy ahead of the upcoming competitions, which is only going to make it that much harder for opposing teams to take them down.