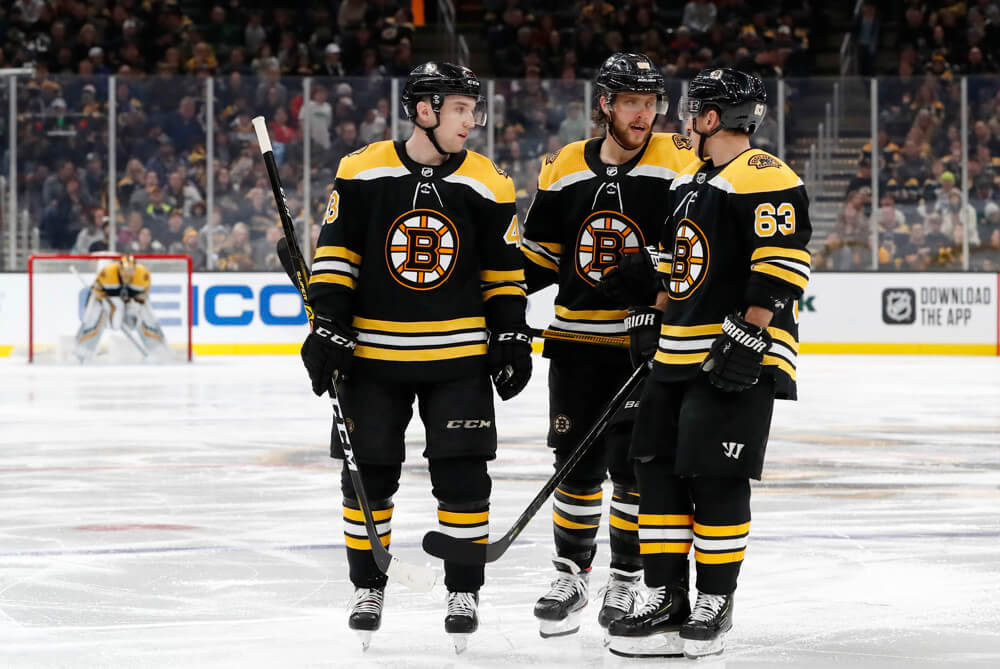 The Week Ahead: Bruins-Penguins Battle In East

The Week Ahead: Bruins-Penguins Battle In East

Whether it’s the NBA or the NHL, this week has some challenging matchups on tap.  Both leagues are in full swing now and teams have had a chance to get a feel for how they’re going to work the rest of the season.  It’s time to put that knowledge to work and start to make a difference.

In the NHL, the Pittsburgh Penguins are in Boston to take on the Bruins tonight.  The Bruins are on top of the Atlantic Division in the Eastern Conference with a record of 10-1-2 and are ready to defend their season performance.  They’re in a good spot to do it against the 8-5-1 Penguins, too.

Everyone should expect to see a lot of action thanks to Matt Murray of the Penguins and Jaroslav Halak of the Bruins.  They both have had incredible years in the net so far and tonight won’t be any different.  However, Bruins right-winger David Pastrnak is going to prove to be a little more than Murray can handle, which is why a -176 moneyline to the Bruins is a safe indication on who is going to emerge victorious.  If a wager on the game is in the cards, take the under at 6.5.

The Arizona Coyotes have already shown this season that they’re ready for a good challenge, but tonight’s road game against the Edmonton Oilers might be a little too much.  The Oilers lead the Pacific Division in the Western Conference and have already racked up 21 points in 15 games.  It’s an impressive start that the Coyotes hope to stop in its tracks.

Arizona took down the Colorado Avalanche this past Saturday in a shutout that resonated throughout the division.  The team is ranked second in the league in goals against and this is going to prove vital tonight.  By the end of the game against the Oilers, though, it will most likely prove to be just close enough to be threatening, but not enough to secure the win.  A -120 moneyline to the Oilers shows that they’re the favorite and this prediction is expected to come true.

On Wednesday, the Oilers will have to be ready for a second tough game.  They’ll face the Central Division-leading St. Louis Blues, who have a four-game winning streak under their belt.  That could change when they meet the Vancouver Canucks tomorrow, but it isn’t likely.

The Blues are 9-3 on the season and have shown themselves to be everything a pro hockey team is supposed to be.  It’s unfortunate that they lost Vladimir Tarasenko to injury last week, not being able to count on him for about five months, but there is still a lot of top talent on the team.  Odds aren’t up yet, but expect the Blues to capture the puck and the win.

From the world of the Zamboni to the world of waxed floors, the NBA is also going to see some incredible action.  It starts tonight when the Philadelphia 76ers take on the Phoenix Suns.  The 76ers are on top of the Eastern Conference and are coming off a five-game winning streak.

On the opposite side of the ball, the Suns are in the middle of the Western Conference and, while should be able to put up a fight, won’t be able to do enough to take the victory.  Philadelphia is set to win against a -1.5 spread and a moneyline of -120.

The LA Lakers will be more than ready for the Chicago Bulls tomorrow.  They sit on top of the Western Conference with a 5-1 record, all five as part of a continued streak.  The Bulls, though, are 2-5 and are not looking so hot.  There’s a good chance that Avery Bradley won’t have to sit out in the game, after having suffered a not-so-catastrophic injury against the San Antonio Spurs, and the team will be at almost 100%.  Expect the Lakers to continue their winning streak and easily score another victory against the Chicago squad.