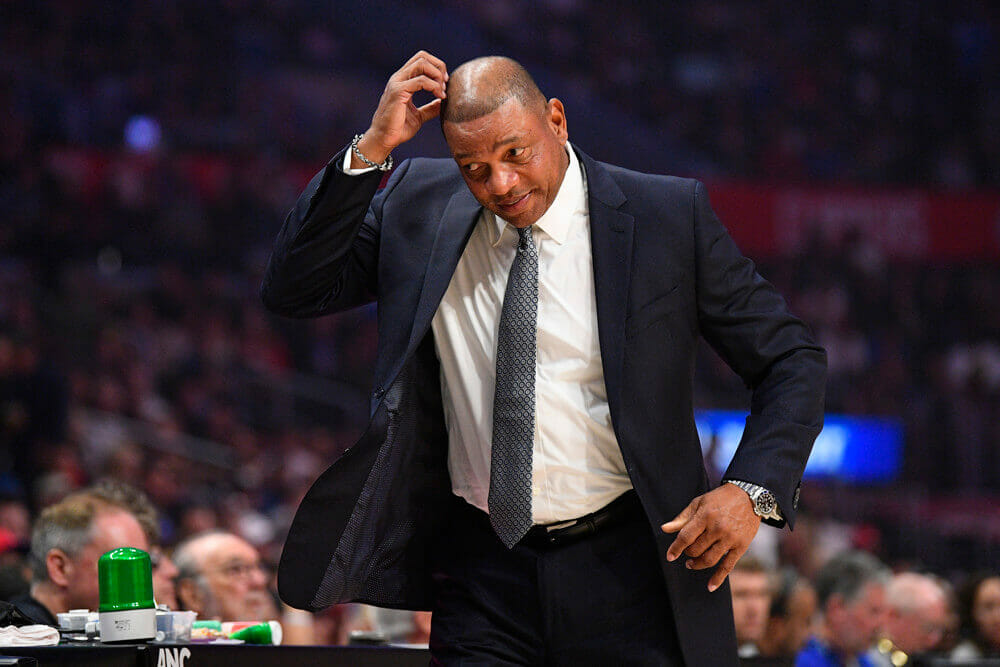 Doc Is Out: Clippers Part With Rivers After Collapse

Doc Is Out: Clippers Part With Rivers After Collapse

After guiding the team since 2013, Rivers is out following a disgraceful postseason that did not achieve the franchise’s championship expectations.

Rivers Is Ready For A New Challenge

After his dismissal, Rivers said in a statement, “When I took this job, my goals were to make this a winning basketball program, a free agent destination, and bring a championship to this organization.”  He added, “While I was able to accomplish most of my goals, I won’t be able to see them all through.”

Before Rivers was designated as the Clippers coach, the club only reached the postseason four times during the course of 20 years.  Since he took over, however, the team achieved a 356-208 record and they made it to the playoffs on six occasions, reaching the Western Conference semifinal in 2014, 2015 and 2020.  Rivers never led the team to an NBA championship, but at least it made it further than it had in two decades.

According to an official press release, Clippers owner Steve Ballmer and Rivers decided to mutually part ways, and the move provoked several reactions from executives within the league.

One of these came from an unidentified Eastern Conference representative, who told Hoops Hype, “Doc underachieved every year in L.A. but one (last year).  This needed to happen so they could hopefully reach their potential.  They need to win big next year with Kawhi Leonard and Paul George having player options. Lots of pressure there next year. Not many coaches out there would be able to handle that.”  Sometimes, teams need drastic changes to improve.  Another Eastern Conference representative told Hoops Hype, “I heard whispers, but didn’t see it actually coming.  There’s a ton of pressure on them next year.”

Last year, Ballmer introduced both Leonard and George as promising figures for the team.  The real intention was to win the NBA championship; nothing else would be accepted.  Since Rivers didn’t accomplish what he was supposed to, he is now looking for a new home.

The Clippers Could Lose More Talent

Leonard and George are under contract for the upcoming season, but they might become free agents after that.  Chances are that the 2021 season means the end for the team’s expectations to win the championship if they leave.  One aspect that brings more pressure for the club is that the Clippers don’t have control of a first-round selection until 2027.

The Clippers are now looking for a new coaching candidate.  One of them is Ty Lue, who was interviewed for the position of head coach right after the Clippers decided to dismiss Rivers.  The club wants someone like him because he won a championship in a pressure situation when he was with the Cleveland Cavaliers.

Besides Lue, Van Gundy is a potential coaching candidate for the Clippers and the Houston Rockets.  He has worked as a coach in the NBA since 2007, and he was responsible for leading Team USA to the gold medal at the 2017 FIBA AmeriCup.  He then made it to the 2019 FIIBA World Cup, as well, and could offer a certain amount of fresh talent the team needs.

On the same regard, a league representative said, “I think people are saying JVG because of his connection to Lawrence Frank, but I don’t think Lawrence will be making this decision.  [Executive Board Member] Jerry West and Ballmer will be.”

Sam Cassell is another possibility.  Despite not having any experience as a head coach, he has vision and wouldn’t be the first person to be brought into to lead a team without having held that position.  Lue, Steve Kerr and Nick Nurse all had zero head coaching experience, and they have all won championships.

A source from ESPN says that Rivers still has two more years of his contract with the Clippers, and could take an extended vacation.  However, it’s rumored that both the New Orleans Pelicans and the Philadelphia 76ers are interested in him, so he may have something lined up as soon as he’s able to get back on the court.