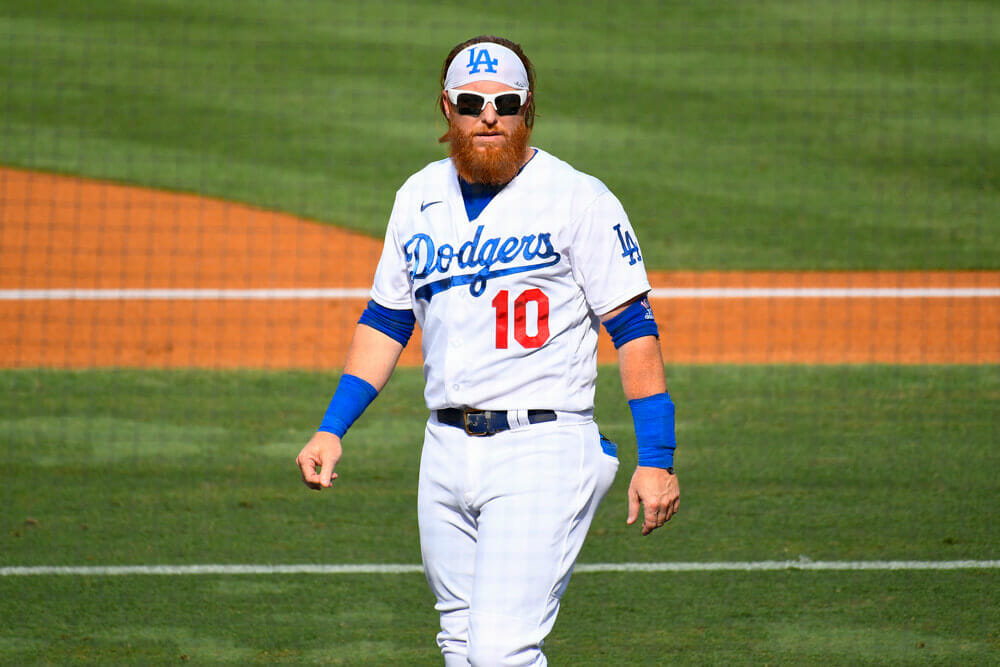 The LA Dodgers had just won the 2020 World Series, after a hard-fought six games against the Tampa Bay Rays, for the first time in 32 years.  They had come close a couple of times, having played in three out of the last four World Series, losing first to the Houston Astros, then to the Boston Red Sox.  Two excellent teams, to be sure, but they still lost.

This World Series will come with an asterisk, though, depending on what happens next.  MLB isn’t happy with Dodgers third baseman Justin Turner after he decided to take the field after the win, despite having tested positive for COVID-19.

The Dodgers put it all together to beat the Rays when young Julio Urias whizzed the final called strike by Willy Adames to end the game and win that coveted World Series ring they all wanted so much.  It was an emotional moment for the Dodgers team, and for true blue Dodgers fans everywhere.

It was in the seventh inning of that final game that something very odd happened to Turner.  It seems that MLB was informed, during the seventh inning, that he had tested positive for COVID-19.  “Turner was pulled from the game and quarantined in a Doctors’ office inside the stadium,” according to President of Baseball Operations, Andrew Freeman.

A little late in the game to be doing that on the one hand, but then, how could they not do it on the other?   Obviously, Turner was wrong to leave the quarantine, but, think about it, 20 minutes or so after he was informed of the positive test, he is still all pumped up from playing in the World Series, and then he is told to sit still and wait.  Turner is sitting there by himself in a small room, and the game ends with all the associated cheers and noise that must have been heard throughout the stadium.  After being one of the team leaders of the Dodgers for four years, the enthusiasm and energy he felt must have been overwhelming.

Turner bolted from isolation and joined his teammates in celebration out on the baseball diamond, something every MLB player dreams about doing.  All he wanted to do was to be in that picture with his teammates as they posed, laughing and smiling in the middle of the playing field, and perhaps hold that beautiful trophy for just a moment and a photograph.

It may have been a poor judgment call on Turner’s part; however, it could cost him in the long run.  MLB Commissioner Rob Manfred’s office, along with the players’ association, is going to do an investigation of the incident to see exactly what Turner did, and if anyone aided him along the way.  Depending on the result of that investigation, Turner could be fined or suspended from the league.

Frankly, it is going to be perplexing to punish Justin Turner in any significant way.  He is 35-years old and, with the culmination of World Series play, he became a free agent, having fulfilled his four-year contract with the Los Angeles club that paid him a cool $64,000,000.

Turner could simply retire if the going gets to rough.  But then baseball and the Dodgers would lose one of its most colorful characters, not to mention one of its best players.  Surely, he would miss baseball a lot as well, but with that kind of money in the bank, he wouldn’t have to pine about it for very long.  Fortunately for the Dodgers, initial testing following the World Series win didn’t result in any positive COVID-19 tests.