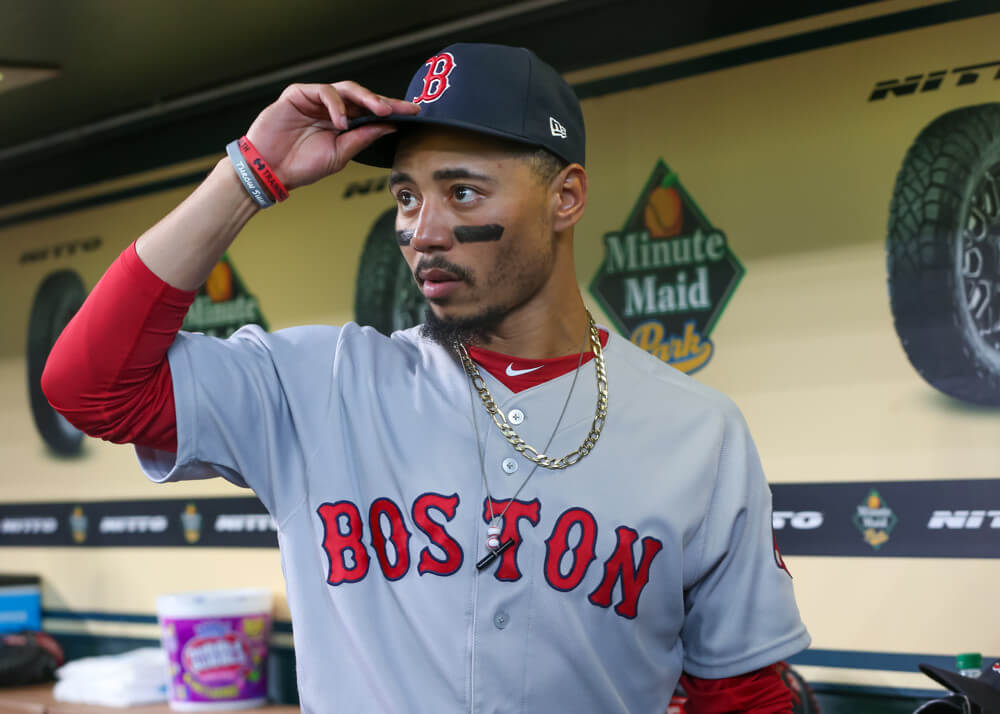 No, No, Red Sox! Memories Of Babe In Betts Trade

No, No, Red Sox! Memories Of Babe In Betts Trade

Whether you grew up with Williams or Yaz, Pedro or Papi, if you are a Red Sox fan, you are forever bound to history. And particularly for fans old enough to remember the days when they weren’t winning four World Series titles in a span of 15 seasons, that history had an indelible starting point.

That was the year that defined multiple generations of Red Sox baseball before finally, after 86 years, the Red Sox reached the summit in 2004 and, for once, didn’t fall off painfully and spectacularly.

Those with very long memories will know that the hero a century ago was arguably the game’s best player, Babe Ruth, and Red Sox fans for those next eight-plus decades knew to their great cost what a disaster it was when owner Harry Frazee sold the Bambino to the New York Yankees for nothing but the money to finance a Broadway show.

No, No, Nanette. Not again.

In 2018, the Red Sox closed another dynastic run with a fourth title since the miracle of 2004. There was 2007 and ’13 and finally 2018, and that spectacular team was led by another MVP performance. And just as it was a century ago, team ownership, looking for cash relief, let that magical player leave for virtually nothing, and a region who’d seen this play before, howled with sadness and anger.

They took away their Mookie.

For all the success of the Red Sox over the past century, the homegrown generational stars have been few and far between. Ted Williams, of course, from 1939-60. Carl Yasrtzemski, the hero of the 1967 Impossible Dream, succeeded Ted in 1961 and starred until 1983. His torch was picked up by the Rocket, Roger Clemens, who toed the Fenway mound from 1984-96.

Pedro Martinez, an import from Montreal, and David Ortiz, a cast-off from Minneapolis, would come in 1998 and 2003, combining to rally against the Yankees in 2004, before Ortiz alone, in his f—ing city, would anchor the middle two titles in ’07 and ’13.

Then came Betts, the heir apparent — with his sneaky power, graceful defense and infectious swagger – to sweep Red Sox Nation off its feet perhaps unlike any other superstars before him. But as his fame grew, so did his desire for fortune, and by the end of the disappointing 2019 MLB season, it became clear that Betts would opt for free agency after 2020 and the Red Sox, having invested far too much in players of lesser talent in order to maintain their new-found championship ways, left themselves at the mercy of baseball’s unforgiving luxury tax.

The die was cast, much to the dismay and disbelief of Boston’s diehard fans.

And so, after a week or so of heated rumors, the speculation became fact. Betts is now a Los Angeles Dodger after Tuesday night’s blockbuster trade (or at least we think he is, after one of the trade chips revealed itself as damaged goods).

A wounded Red Sox fandom came howling forth. “Give us Mookie or give the Red Sox death!” they cried. And though the replacements were coming, one if by Los Angeles, two if by Minnesota, watching Mookie leave via the free agency trail was simply too much for New England to take.

The ire was pointed directly at owner John Henry, accusing him cheaping out on a top-5 player in the game and abandoning the fan base who’d grown so attached to the young, dynamic star. Lest they had forgotten it was Henry who finally, after 86 years, delivered that precious first championship in 86 years and had kept the Red Sox at the top of the payroll charts for another 15 years as three more titles followed.

But “Wait ‘til next year,” has now been supplanted by “What have you done for me lately?” in Boston, and who could deny these once-long-suffering fans their right to go from starving to spoiled? What they didn’t know back in 2003, when Aaron “Bleeping” Boone delivered the final dagger into Red Sox hearts before the sun came out was that the upcoming era of salvation would have its bill waiting to come due.