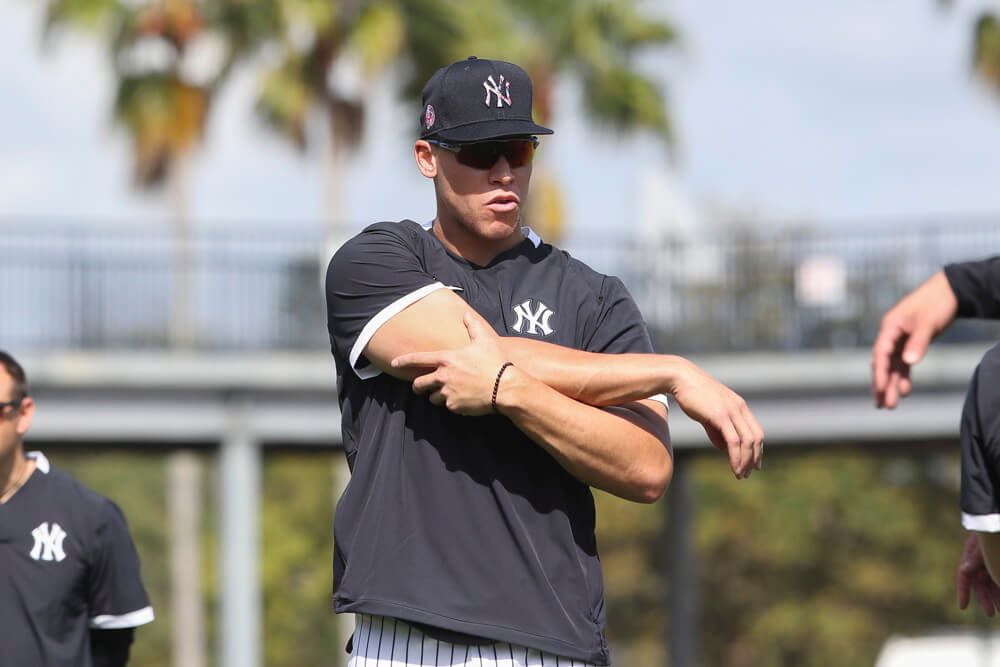 Houston Astros cheating scandal.  There – it’s out of the way and doesn’t need to be mentioned anymore today. Major League Baseball has 30 teams, and they deserve some press time, as well.  Fortunately for them, and baseball fans, their press time is virtually all positive.  Spring training is running strong and this weekend will see a number of teams testing their players on a real field, not just a practice diamond.  With several players such as Aaron Judge still vying for position, they can’t afford to screw up this weekend.

Aaron Judge Easing Back Into It

The New York Yankees are hoping Aaron Judge bounces back quickly.  The slugger has been dealing with a sore shoulder that has made his participation in spring training rare, but he is apparently doing much better.  He was throwing the ball yesterday and taking some swings off a practice tee, and is expected to continue light training today.  If he’s not up to speed, the Yanks can always count on prospect Deivi Garcia, as long as he doesn’t choke this weekend against the Toronto Blue Jays.

The LA Angels have adopted a habit that is appearing more and more in major sports leagues.  Load management led the team to moderate the amount of time Albert Pujols spent on the field last season – limiting him to just three days in a row – and this practice will continue this year, possibly with other players.  Anthony Rendon is on the team on a seven-year, $245-million deal and Shohei Ohtani will be back in business this May.  By keeping Pujols, and others, sharp, the Angels are looking at maintaining a high degree of resistance throughout the entire season.

Chandler Shepherd is going to get his big chance with the Baltimore Orioles this Sunday when the team faces off against the Atlanta Braves.  He was brought on as a relief pitcher for the team late last year, coming from the Boston Red Sox, and now will have an opportunity to show whether or not he is ready for the big leagues.  Andrew Velazquez will look to prove his skills, as well, after he was scooped up from the Cleveland Indians on Wednesday.  Ty Blach, who has been with the team since last year, will step in for Shepherd after a few innings to give him a breather.

Sean Rodriguez signed a minor-league contract with the Miami Marlins during the offseason, and is with the team now in its spring training.  Originally from Miami, Rodriguez has bounced around the league for the past 12 years, with his longest stretch with one team being the four years he spent with the Tampa Bay Rays.  If he shows consistency on top of the strength he has already demonstrated, he could be a part of the team’s opening day roster.  Rodriguez will most likely be on the field tomorrow when the Marlins take on the New York Mets.

Jonathan Lucroy is a two-time All-Star whose abilities seem to have peaked way too early in his career.  He has been struggling to find a home, so, when Boston Red Sox interim manager Ron Roenicke called him to come out for spring training, he didn’t waste any time.  The catcher might make an appearance when the Sox take on the Rays tomorrow, but he is most likely destined to be a backup catcher to Christian Vázquez.  Boston is also looking forward to seeing how Rafael Devers and Chris Sale perform, with Devers expected to make his first appearance today and Sale recovering from pneumonia.

Cody Reed is looking to make a difference for the Cincinnati Reds.  The left-handed pitcher has been struggling with injuries in MLB, and he’s hopeful that he has been able to rebound enough to grab one of the three open spots in the bullpen.  He has some stiff competition, going up against lefties Jesse Biddle and Josh Smith and righties Nate Jones, Sal Romano and Tyler Thornburg, but says he’s up for the challenge.

Shogo Akiyama will take to the outfield for the Reds this Sunday when they take on the Chicago White Sox.  He is about to make his debut as part of the team after having signed a three-year deal worth $21 million last month.  It’s time for the Reds to see if the investment pays off.