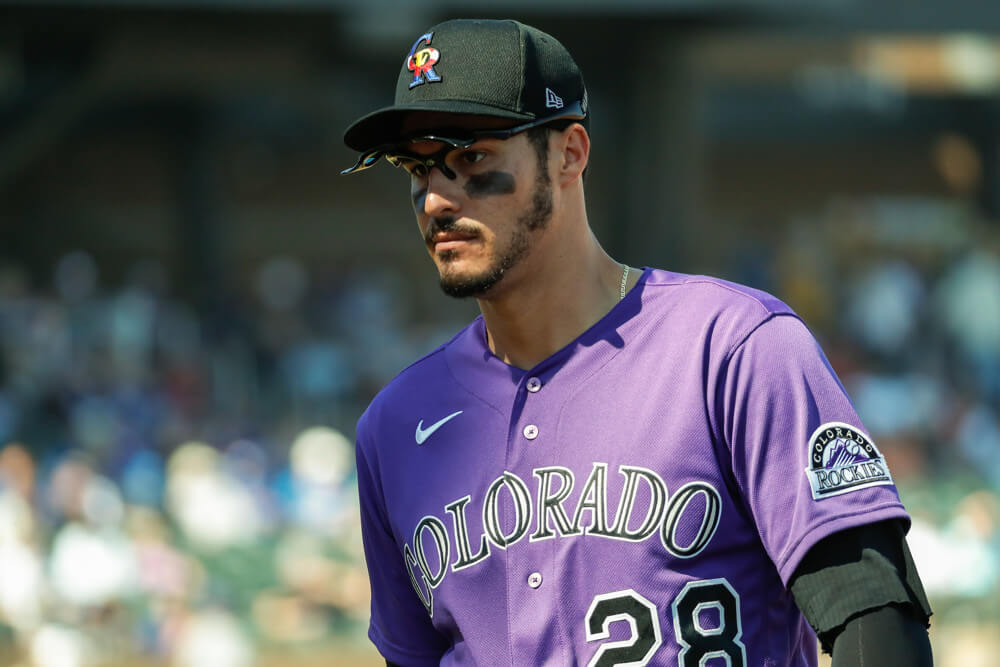 Baseball is back! We think. Each day, SportsIntel’s Matt DeSaro will take a look at two of the 30 teams in Major League Baseball as we head toward MLB Opening Day in late July and today we continue in the NL West with the Colorado Rockies.

The Colorado Rockies were trending up after the 2018 season, beating the Cubs in the NL Wild Card game, marking their second straight appearance in the postseason.  It was one of the few times in club history they made it out of the Wild Card round and the team and fan base had high hopes for 2019. With Nolan Arenado signed to a huge dead, they also had their best player on the books for the long haul.

Alas, things were not to be for the Colorado Rockies last year, and we don’t see much changing as we head into the MLB Opening Day this season.

They had a very slow start to the season at the plate and when their bats finally woke up, their pitching just collapsed.  By the time all was said and done, Colorado finished with an abysmal 71-91 finish and have a whole world of problems heading into 2020.  Their team payroll is much more than the quality of talent they have available.  And the talent they do have want out.  Arenado is apparently not even on speaking terms with the GM and they have been either unable or unwilling, to move him so far.

Their pitching staff is also not quite up to par in my opinion.  Their squad from last year ranked last in the majors in a number of important pitching metrics and has changed little to none since then.

What Do The Rockies Do Well?

The Rockies hitters did rebound after a slow start last year to play up to the preseason standards set for them.  They finished the year in the Top-10 of a number of key offensive metrics including ranking fourth in hits and ninth in runs.  The cast of characters remains mostly unchanged from 2019 which will further help these guys gel together.

The Rockies offense has actually had a long history of playing above-average baseball.  Each of the previous ten seasons, the Rockies have finished Top-10 in runs scored and that should happen again this year.  Sure, the Rockies offensive stats need to be taken with a grain of salt because they play half their games in the thin air of Coors Field.  This is evidenced by the fact that despite their fourth-place ranking in MLB for runs drops all the way to 27th when you look at just their road games.  To put that into perspective consider that the Rockies scored 500 runs in their 81 home games but just 335 runs on the road.

These massive differences in their home-road splits makes it very hard to evaluate this team heading into this or any season.  Despite all that, the offensive is better than average and is the real positive of this team.

They have one of the best hitters in baseball with Arenado in this order.  He slashed .315/.379/.583 and played his usual brand of Gold Glove level defense.  He is far and away the best player on this squad and one of the best the league has to offer.  Arenado led the team in HRs with 41, was the only player to go over 100 RBs (118) and struck out less than 100 times. Incredible numbers to have if the Rockies can keep him on the team and motivated.   Trevor Story is another big bat who will look to stay healthy again and wreak havoc on opposing pitchers.  He hit .294/.363/.554 and added 35 home runs and 85RBIs.

Those two aren’t the only bats who can pop on the offense.  Charlie Blackmon swung a hot bat last year but his poor defense really hurt his WAR number.  The Rockies are hoping the offseason can help Blackmon sort those issues out and limit his miscues.

If the pieces all fall into place for the Rockies after the opening day of the MLB season, this team can certainly finish within the top ⅓ of the league in offense and keep this team playing into October.

The Rockies’ biggest issue heading into the 2020 season is easily their pitching staff.  A group that has remained mostly unchanged from last season and did very poorly in the rankings.  Their year-end ERA was 5.87 (30th), opponents hit .286 against them (24th) and they recorded fewer strikeouts than any other team in the Majors.  Sure, much like the hitting, Coors field does have a part to play in this.  Any pitcher, no matter the skill, who plays have their games at Corrs will see their numbers slip without question.  Problem is, they pitched just as bad on the road.

Take Kyle Freeland for example.  He had a breakout year in 2018, going 17-7 with a 2.85 ERA and pitching about half of his 202 ⅓ innings at Coors.  Proving it is possible to succeed as a starting pitcher in Colorado and laid the groundwork for what was to be another great year in 2019.  Yea not so much.  Freeland went 3-11 with a 6.73 ERA and was eventually designated to play at AAA.  German Marquez was also unable to replicate his previous seasons of success despite starting off well.  For the first two months of the year, Marquez had a very solid 3.84 ERA in 85 innings with strong peripheral stats.  Cut to the last two months of the year, where Marquez saw his ERA balloon to 5.99 with a 4.75 FIP.  While his strikeouts and walks remained strong, he gave up 20 long balls in his last 88 innings pitched after totally losing command of his fastball.

There was not a single pitcher who made any significant strides last year and I think it’s safe to say most regressed.

Another huge issue has been the mismanagement of Nolan Arenado’s contract.  As mentioned above, reports are that the Rockies star and their General Manager aren’t on speaking terms after the PR nightmare they created.  Arenado stated that he was not mad that he was being shopped but instead that it became public. He spoke about how it would affect the fans of the team and should have been kept in house.

It really seems that the biggest thing the Rockies accomplished this offseason was to piss off their best player.  Good work Colorado.

Making matters worse, Arenado has an opt-out clause for the 2021 season, leaving Colorado in a sticky situation.  They could see the best player this team has had in years just walk out the door for nothing to show for it.  Trading him doesn’t help much as it would garner poor reactions from this fanbase and would be unlikely to return enough talent to make it worth their while.

Colorado Rockies will enter the season with a $150.5M on opening day which is a lot of money to finish fourth in the MLB’s NL West.   Maybe even fifth if the wheels completely fall off again.

So how does all this play out in the upcoming season?  I have to agree with Arenado that the Rockies did nothing to help him this offseason and that can’t give him much incentive to really give it 110% every night.

Problem is, their hands are kind of tied.  Too much of their money is tied up in players who are just underperforming and overall mediocre.

So we have one of, if not the worst pitching staff in the majors which not only includes a rough rotation but a bullpen that has been a disaster since last year.  They have a decent offense but those players play rather poor defense which essentially outdoes any of the good they do at the plate. Sure, they have one of the best players in baseball but he is the definition of disgruntled so who knows how that plays out.

Plainly put, this just isn’t a good team and to make matters worse, the rest of the division has shown growth.  The Padres, D-Backs, and Dodgers are all far better then they are and will be regularly beating this team either at home or at Coors.

Somebody has to lose the in the NL West standings and I think we’ve found our pick.  They will be side by side with the Giants in the division’s basement and I just don’t see them getting to 27 wins, especially if Arenado gets traded.