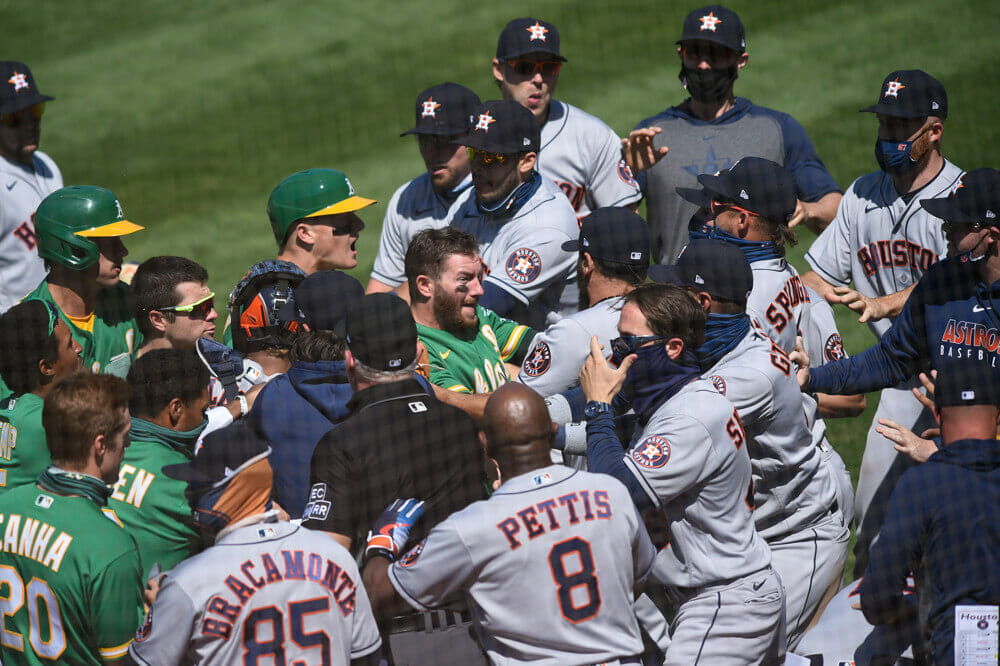 People were expecting to see some type of punishment for both guys who got involved in a bench-clearing fight this past Sunday in a game between the Houston Astros and the Oakland A’s, but no one knew what to expect. MLB passed down the decision yesterday and, while there is still some belief that the Houston Astros remain essentially free from the long arm of the MLB law, at least there was a little justice served, especially for Alex Cintron

Astros hitting coach Alex Cintron received a 20-game suspension and Oakland Athletics’ Ramon Laureano was punished with six games off the field.  Both will also have to pay a fine for their misconduct.  Laureano became irate after being hit by a pitch thrown by Humberto Castellanos in the seventh inning, and proceeded to mix it up with Cintron after the coach allegedly said something about Laureano’s mother as the latter was taking his free walk to first.

Undoubtedly, this was a wrong situation.  Under these circumstances, amid the COVID-19 pandemic players and members involved in the game should avoid physical contact of any kind, but they did the opposite.  When the brawl started, the benches were cleared, and most players interfered to stop the fight.  However, MLB said at the beginning of the MLB reboot that no fighting of any kind would be tolerated, and that season suspensions would be handed to those who broke the rules.  The league’s reaction to the fight doesn’t seem to be aligned with that warning.

These are not going to be good days for Cintron – his suspension is the longest for an on-field offense in 15 years.  The last major punishment was against former Texas Rangers pitcher Kenny Rogers, who also was suspended 20 games due to a fight with two cameramen back in 2005.  The Astros’ Cintron will have to accept his fate, deal with it and not let it happen again.

About his suspension Cintron said in a statement, “I accept MLB’s suspension and will learn from this.”  He added, “Although I never referenced Ramon’s mother, my actions were inappropriate.  I apologize for my part in Sunday’s unfortunate incident.  As coaches, we are held to a higher standard and should be an example to the players.  Hopefully, other coaches will learn from my mistake so that this never happens again in the future.”

In regard to Laureano’s situation, he appealed the punishment.  Therefore, his disciplinary action was delayed, and he was able to play on Tuesday night in Oakland’s game against the  Angels.  He was in the lineup batting second at Angel Stadium, but his presence didn’t do much good.  The Angels won 6-0, taking the lead 2-0 in the three-game run.

Laureano became quite upset when he was hit by Castellanos in the seventh inning and then began arguing with Cintron.  He stepped off first base, hurled his batting helmet, and then began running toward Cintron to engage in a real fight.  When Laureano was sprinting toward Cintron, Astros catcher Dustin Garneau intercepted Laureano before he got to the hitting coach.

Laureano used to play with the Astros and both rival teams have been the top performers in the AL West over the past two years.  The conflict seems to have started because A’s pitcher Mike Fiers, who is also a former Houston player, revealed the Astros’ cheating scandal back in November to The Athletic.  Most likely, this is causing such acts of violence in the MLB.  When the incident happened, players left the dugouts and tried to stop the fight.

Astros manager Dusty Baker gave his opinion regarding this incident involving Cintron among others, “I just thought that, whew, boy they threw the book at us big time.  But what can you do?  The ruling is the ruling.  I talked to the powers that be in the commissioner’s office this afternoon and we had a good conversation.  So … we have to deal with it and hopefully this brings our guys even closer together.  He was a big part of our team.” Baker is sorry for what happened, but when strict rules are broken, some type of punishment must follow, and nothing can be done to avoid it.

Oakland manager Bob Melvin said, “It’s just something we have to deal with.  I don’t make those decisions, and whatever I think about them doesn’t really matter anyway, so I think the best thing to do is try to get it behind us as quickly as we can.” Melvin added that Laureano is a very important figure for the team.  He also said, “You can’t replace him.  You just have to play short.” The A’s will simply have to find the way to be without him for the next few weeks.