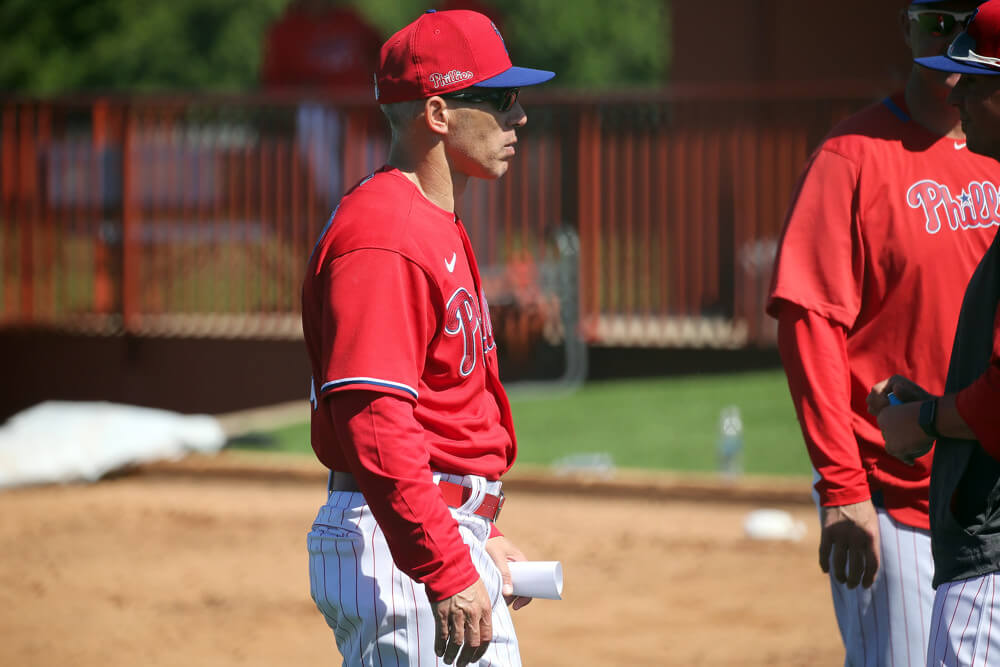 Baseball is back! We think. Each day, SportsIntel’s Matt DeSaro will take a look at two of the 30 teams in Major League Baseball as we head toward MLB Opening Day in late July and today we continue in the NL East with the Philadelphia Phillies.

The Phillies’ streak of missing the playoffs has now hit eight agonizing seasons.  Despite the huge signing of Bryce Harper a year ago, Philly managed a mere fourth place finish in the National League East standings with a .500 record.

The heat has been cranked up to 11 after spending over $700M on free agent signings over the last three seasons with limited success.  Gabe Kapler was the first victim of this slide but heads will begin to roll left and right if they don’t at least snag a Wild Card berth and play their first winning season since 2011.  The Phillies picked up two difference makers in Didi Gregorious and Zack Wheeler to go along with new manager Joe Girardi.  The higher ups in the front offices are hoping Girardi can squeeze enough water out of this rock to save a job or two in Philly.

Gregorious and Wheeler are not the kind of blockbuster signings that Phillies fans might have hoped for, but they fill two key gaps.  Didi brings a strong bat to compliment his Gold Glove caliber defense, which strengthens their infield by pushing Jean Segura to 2B.  The only downside I see is that Didi was brought on with just a 1 year contract.  Wheeler was another good get, giving Philly a solid No. 2 starter to back up ace Aaron Nola and bolstering a very average rotation.

What do the Phillies do well?

Philly’s offense took a strong step forward in 2019 with the acquisition of Bryce Harper and seeing some of their young talent find success.  They managed to plate 97 more runs than in 2018 and ranked 22nd in HRs and 15th in RBIs.  Not the most impressive numbers, but any growth is good for a team that has struggled for the last decade.

Gregorious and 2B Josh Harrison are both improvements on last year and will make it harder for opposing pitchers to navigate this batting order.

But the hope of the Phillies securing a playoff spot as they toward opening day needs to start with Bryce Harper and, to a lesser extent, Rhys Hoskins.  Despite hitting 35 long balls and 114 RBIs, Harper hit just .260 in his first season with the Phillies and struck out more than any other year of his career.  This would be bad news for any team with a new superstar player, but the Phillies really are on the clock and can’t afford for him to struggle again.  Hoskins also regressed last year, hitting just .226 with 26 home runs, and finds himself on the hot seat heading into camp.  He is good defensively, but no team can succeed with a 1B who has an average WAR of 1.0 over the last two seasons.

Despite those speedbumps, the Phillies are on track to have their best offense in the last decade as they look to keep pace with the rest of their division.

What do they need to improve?

One word.  Pitching.  Despite the Wheeler signing, this rotation is still rather weak behind him and Nola.  Philly was banking on either Vince Velasquez, Nick Pivetta or Zach Eflin would be able to break out in 2019 but only Eflin was even a serviceable starter when all was said in done.

Sure, they have Cy Young winner Jake Arrieta on staff, but he is truly a shadow of his former self and is rarely healthy.  When he was brought over in 2018, the Phillies knew he wasn’t the same ace from 2016, but they couldn’t have expected just how far he had fallen.  His first season was markedly average and he actually regressed in 2019, putting up his worst numbers since his rookie year in Baltimore.  While their bats took a step forward last year, the pitching staff posted a worse ERA (4.53) from 2018 and recorded just 36 saves.  They will really need one or more of their back-end starters to get it together and get some swinging misses if they hope to finish above .500.

Another spot which the Phillies could use some help for opening day of the MLB season would be in center field.  Frankly, they don’t have a natural CF on the roster as we head to Spring Training and will probably roll with a committee again.  Scott Kingery, a true infielder, started the most games in CF for the Phillies last year which is not ideal. Two problems there.  First off, he is a natural 3B/SS, so he has been playing defense out of his element.  And second, they don’t even have him as an option this year because he is needed at 3B. Currently the job is Adam Haseley’s to lose, which I expect him to do before the All-Star break after posting just a .720 OPS in limited action last year. They just don’t have the time to be patient.  Roman Quinn is also a possibility but with a .668 OPS in 2019 he doesn’t inspire much hope either.  Making matters worse, there aren’t even any real options on the trade market so somebody needs to step up fast.

After going 81-81 last year, sportsbooks covering MLB betting have the Phillies projected to win 31.5 games in 2020.  I like the Phillies chances to get there with the additions they have made to the current roster as we countdown to the MLB season.  Didi and Wheeler add two very strong players at key positions that were lacking last season.  That alone is worth a few wins, especially if Wheeler can continue to grow as he has done each of the last three winters.

I also have faith in Bryce Harper to get back to form and perhaps even make a run at the MVP.  At just 27 years old, he should be at his peak as a professional athlete and this is the year to show it.  Harper will not be the root cause of the reason why the Phillies miss the playoffs for the 12th straight year, but he could be the main reason they don’t.

I do think that as we countdown to MLB Opening Day, the Phillies have taken a step forward but the top teams in their division are still better. That will leave them on the just outside looking in yet again after the season ends.  I like their chances to miss the playoffs, albeit narrowly, with 32 wins under their belt.