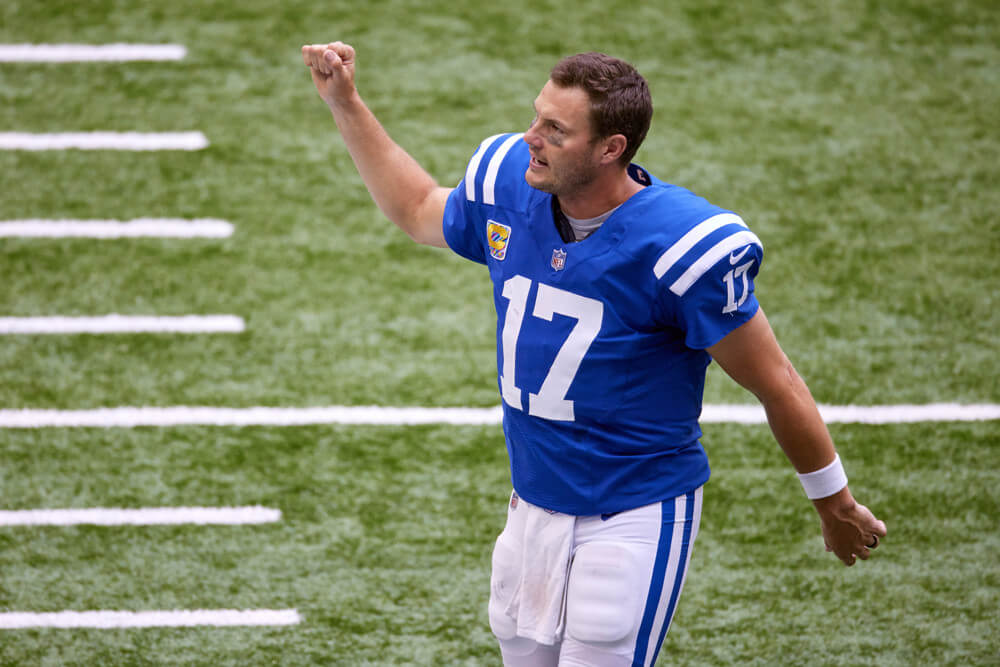 Week 7 played out well for the most part, and I went 2-1 to start off Week 8 on Thursday Night Football. For transparency, I’ve gone 23-13-1 ATS in the NFL through Week 8 (TNF) over at sportsintel.com and will keep track in this post weekly. The biggest thing is to trust the process, as it is a long season. There are going to be some ups and downs, but that is gambling for you.

We are seeing a lot of scary dogs this week, but sometimes you have to take them in good, situational spots. After 8 weeks, we have half a season’s worth of data to really be able to look at and breakdown. I like to use both the eye-test and metrics before making my wagers, so the more games played, the more I feel confident with my picks. After diving into the numbers, I see some good value on a couple of teams this weekend. So, without any more wait, let’s get to it.

I know Detroit is hot, but I like the Colts in this spot this weekend. The bye really came at a good time for this Indy squad, as they get their best defensive player back in Darius Leonard. Defensively, they are top 5 in DVOA vs. the pass and run. But, the defense goes as Leonard goes, and the stats are there to prove it. With him in the lineup, the Colts allowed an average of 4.4 yards per play, only 14 points per game and -0.156 EPA per play (league leading) in their first four games.

Offensively, I am not a fan of Phillip Rivers, as I think his best days are behind him. But, this isn’t a bad matchup for him, because of the Lions inability to rush the passer. Detroit ranks just 25th in pressure rate, which should mean a clean pocket for Rivers all game long. Look for Indy to use Jonathan Taylor early and often in this game as Detroit ranks only 23rd in run DVOA.

I am not a fan of taking short road favorites, but I like the situation here for Indy. I would play this up to Colts -3.

The Bills have not played great the last three games, but this game should be different. This is one they have to have circled all season long, as this is finally their time to show that they are the cream of the crop of the division.

The Patriots are going to miss Julian Edelman and quite possibly Stephon Gilmore as well, which is huge in this matchup. Without Edelman, the Bills defense should be able to bring an extra defender into the box to stop the Pats run offense. Especially because you know BB is going to try to take the ball out of Cam’s hands and run the ball maybe 30-40 times this game.

Speaking of Cam, after a nice start to the season, he looked really bad last weekend. I don’t see him getting it going against this Bills pass defense.

Offensively, look for Buffalo to try to run some more play-action to get Josh Allen going. While he has cooled off after an insane start to the season, he leads the league in completions and touchdown passes from PA. We saw the 49ers have success via PA, so I would be really surprised if Buffalo did not try to scheme the same way here.

If not now, then when for Buffalo? They have played the Pats tough since Sean McDermott took over, so this is the time to really run it up. I’d play this line up to 4.

I see both of these teams as live dogs, so I like the points in both spots. The Broncos D is legit and I like getting points against an Anthony Lynn coach team. Love Justin Herbert, but more as a dog than a favorite. I hate betting against Russell Wilson, but some sharp money has come in on the Niners. Seattle is really beat up and SF is playing well and getting better. They should find ways to keep up in this game.

If you are feeling really frisky, a two-team, moneyline parlay here would payout a nice return.

Last week we hit with the Bills. Fading the Jets has really been a treat this year, but I am going to try to save the Chiefs for a matchup down the road. I see three teams you can go with this weekend: Bucs, Chiefs, Eagles. Getting a little cute here, so I hope it doesn’t burn me, but I will go with the Eagles. The Cowboys are decimated on the OL and they are starting third-stringer Ben DiNucci. Now, there is always a chance he comes out like Kurt Warner and lights it up, but overall Dallas has a ton of holes to overcome.

So, there you have it for Week 8. Good luck with your wagers and hopefully this sports intel helps with your Sunday NFL card.