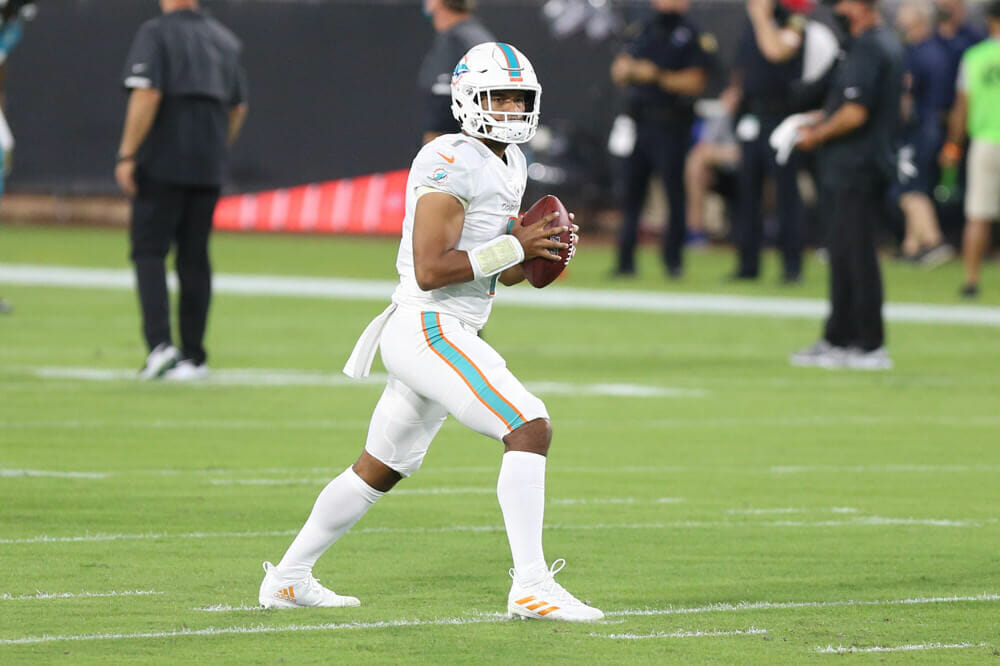 Week 8 of NFL action provided fans with a few surprises and a few upsets.  Las Vegas oddsmakers are usually pretty dependable at predicting how pro football games will turn out, but they missed a few this time around.

The Dolphins Take The Win

The 5-2 LA Rams flew all the way across the US to take on the Miami Dolphins as 3.5 point favorites and probably felt pretty good about their prospects of coming out on top down at Hard Rock Stadium.  Looking at the Monday morning numbers, they are probably still trying to figure out why, and how, they got beat by a Miami team that started a brand new rookie quarterback, Tua Tagovailoa, and who only threw for 96 yards, while their own QB, Jared Goff, racked up 355 yards in the air.  Perhaps because Goff had to throw the ball 61 times to get that yardage.  He did throw two picks, which didn’t help.

The Steelers Show Their Mettle

But the prime example of how the boys out in Vegas can sometimes be off the mark occurred at Baltimore when somebody figured that the Ravens could beat a previously undefeated Pittsburgh Steelers team led by big Ben Roethlisberger by four points.  That one did not work out at all, as the Steelers showed that the deserved to be undefeated after 8 weeks of NFL competition.

Lamar Jackson and the Ravens led at halftime, 17-7, but the Steelers D shut them out in the third quarter.  While the defense was excelling, so was the offense.  Big Ben and the Steelers potent offense ground out 21 more points in the second half to defeat the Ravens by a final score of 28-24.

Green Bay Packers fans are still trying to figure out how a 2-4 Minnesota Vikings team came to Lambeau Field and defeated a team led by All Pro QB Aaron Rogers that was 4-2 coming into the game.  Rogers had 291 yards passing and 3 touchdowns, while Kirk Cousins passed for only 160 yards and only 1 TD.  So, go ahead and explain that 28-22 loss when the cheese-heads went in as 5.5-point favorites.

But the hero of the day turned out to be Bengals rookie quarterback Joe Burrow, who led the LSU Tigers to a FBS National Championship last year.  Burrow had a frustrating rookie season until the 5-1 Tennessee Titans came to Cincinnati as 7-point favorites.  Most students of the NFL figured that Burrow and company would be badly out matched, but guess what.

Burrow, an Ohio native who grew up not far from Cincinnati, passed for 249 yards and two touchdowns against a potent Titans D.  Even the rushing of the Titans’ mighty Derrick Henry, who ran for 112 yards, once again topping 100 yards on the ground, could not save the Titans from the 2-5-1 Bengals this spooky Halloween weekend.  A tip of the hat to young Joe Burrow whose Cincinnati team is finally beginning to feel the spirit and play like Bengal Tigers.

The Bills Pull One Out

The Buffalo Bills were favored to beat the New England Patriots by four points.  They did, by three, and, in doing so, the victory marked the first time that the Buffalo Bills had defeated Bill Belichick’s Patriots since 2014.

The New Orleans Saints needed some extra incentive to beat the Chicago Bears, and they got it through Bears receiver Javon Wims.  He went on the attack in the third quarter, smacking Saints safety Chauncey Gardner-Johnson and earning himself an ejection.  The Saints kept the game alive and forced an overtime, which they were all too happy to win off the sure foot of kicker Wil Lutz.  His field goal in the extra period put the Saints ahead 26-23 and gave them the win.